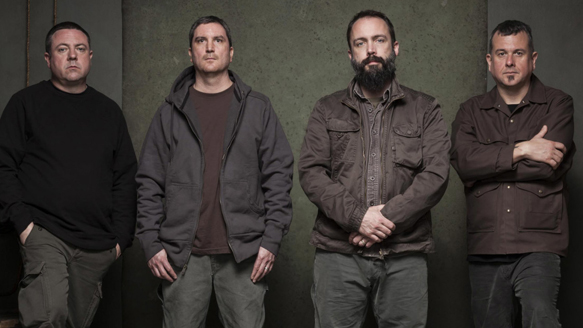 Since releasing their full length debut, 1993’s Transnational Speedway League: Anthems, Anecdotes, and Undeniable Truths, critics have been trying to tag Clutch’s sound. They have been called Doom Metal, Heavy Metal, Blues-Rock, and Funk-Metal, amongst a host of other things. The truth is, they are simply a Rock-n-Roll band; one that has been clearly influenced by a myriad of styles. Coming out of Germantown, Maryland, the band consists of Neil Fallon (vocals/guitar), J.P. Gaster (drums), Tim Sult (guitar), and Dan Maines (bass). Relentless touring and an always killer live show has garnered a dedicated fanbase. Gaster and Maines make for one of Rock-n-Roll’s most innovative, dynamic rhythm sections. The duo consistently provides a tight, groovy pocket over which Fallon delivers vocals ranging from gruff and mean to silky smooth, while Sult delivers ferocious riffs and dancing solos as he continually manages to deliver an expert balance of thunder and melody. The band’s secret sauce is their non-reliance on a formulaic sound, constant re-invention, and a stable of world class talent. Their influences can be heard, but are never copied.

Psychic Warfare, the band’s eleventh studio effort is a collection of fast-paced Rock-n-Roll with some slow-burning numbers sprinkled in. It is the third release on the band’s own label, Weathermaker Music. Their last release, 2013’s Earth Rocker, also featured a return to high-energy Rock after 2009’s Strange Cousins from the West, which had a Blues flavor. Earth Rocker went to number one on the Billboard Hard Rock Album charts, and number fifteen on the Billboard 200, becoming the band’s highest charting album, and generated critical acclaim.

Psychic Warfare begins with the twenty-nine second track “The Affidavit,” which features vocal clamoring in the background and Fallon saying, “All right, well, why don’t you just go ahead and have a seat right there. Here is a pad of paper and a pen. And, uh, well, why don’t you just, uh, why don’t you just start at the beginning there.” Sounding like an interrogating officer in the Southern United States, it sets the stage for an engaging song cycle heavy on themes of murder, intrigue, crime, and death. “X-Ray Visions” gets the music started with a chugging riff, snapping snare, and Fallon growling in an agitated manner. Halfway through, Fallon shouts out roll call for the band, assigning astrological signs to each member of the band. Sult lays down a fiery solo reminiscent of the best of ’80s Hard Rock on this track, delivering a flurry of notes in a short span. “Firebirds” picks up right where “X-Ray Visions” left off after a steadily escalating intro. A break in the middle allows for a fuzz-drenched, fragmented solo by Sult.

“A Quick Death in Texas” finds Clutch giving a wink and a nod to a band that has clearly influenced their sound; ZZ Top. A tale of adultery, a “Yankee” in Texas, and eventually a revenge killing, the song puts the listener deep in the heart of the Lone Star state. Country-inflected guitars rule the day, and a Funk-laden solo dripping with cowbell fills the middle section after Fallon extols, “Please forgive me Mr. Gibbons,” in reference to the legendary guitarist. Another famous musician, this time Stevie Nicks is name-dropped in “Sucker for the Witch.” Opening with a frenetic bass line from Maines, the song quickly takes off with a chugging riff and breakneck vocals. Darting guitars are placed in the back of the mix throughout the track, making for a dynamic sound coupled with Gaster’s pulsating drumming.

“Your Love is Incarceration” has a downright funky riff, echoing the sounds of the 70’s with a blend of Funk, Dance, and even a hint of Disco. The sound is tempered by a pounding rhythm. Fallon, known for his often cryptic lyrics, provides no shortage on this track with phrases like “verbal arson,” and this mind-bending final verse; “I dig my way out with a plastic spoon and thimble/hide the dirt in the cages/Cause that thing that happened in Chattanooga/With a garden hose and Yellow Pages.” “Doom Saloon” is a brief instrumental with loose, languid chords over echoing guitars, sounding like the music that would accompany a duel in a classic Western film. The Doom Saloon is also where the protagonist in “A Quick Death in Texas” was shot down by a jealous husband.

“Our Lady of Electric Light” finds Clutch harkening back to a sound that can be heard throughout their career, and that is heavy Psychedelic Rock. An ambient, slow-building riff gets the song moving before switching gears from Psychedelic to early Heavy Metal with crunching guitars thick with feedback and a blistering solo that sounds like it came out of England, 1970. “Noble Savage” substantially has a Punk-Rock sound with breakneck guitar work and syncopated drumming while Fallon proclaims to be an “unapologetic lifer for Rock-n-Roll.” The song never wavers and is relentless from start to finish.

“Behold the Colossus” is the album’s heaviest cut. Wah-wah soaked guitar coupled with odd-timed drums, unexpected fills from Gaster, pummeling bass from Maines, and Fallon’s tale of monsters, chaos, and revenge make for a powerful tune. Clutch’s youth, and the prevalence of the New Wave of British Heavy Metal, can be heard throughout. Album closer “Son of Virginia” features more sounds from the South. A slow Clutch number, the song meanders beautifully along for over seven minutes; somewhat of an outlier for Psychic Warfare as no other song breaks the four minute mark. Country-Blues are the foundation for a harrowing tale of otherworldly creatures, graveyards, storms, and questionable heritage. Sult solos throughout the song as the song takes on the feel of a power ballad on steroids before an eerie, extended outro swimming in feedback, which is punctuated with spoken words by Fallon, bringing “The Affidavit” full circle in which he asks for forgiveness from the suspect for “…appearing somewhat vexed” by his statement.

Clutch is a thinking man’s band. They consistently dodge the typical subject matter found in Rock-n-Roll. To fully appreciate the lyrics, it is helpful to be well-versed in Pop culture, world history, mythology, religion, politics, music, and mysticism. The fact that the four members have been playing together going twenty-five years is evident throughout as the band’s penchant for powerful music is always dynamic and original. Listeners looking for high-energy, inventive, well-crafted Rock-n-Roll, pick up Psychic Warfare. CrypticRock gives this album 5 out of 5 stars. 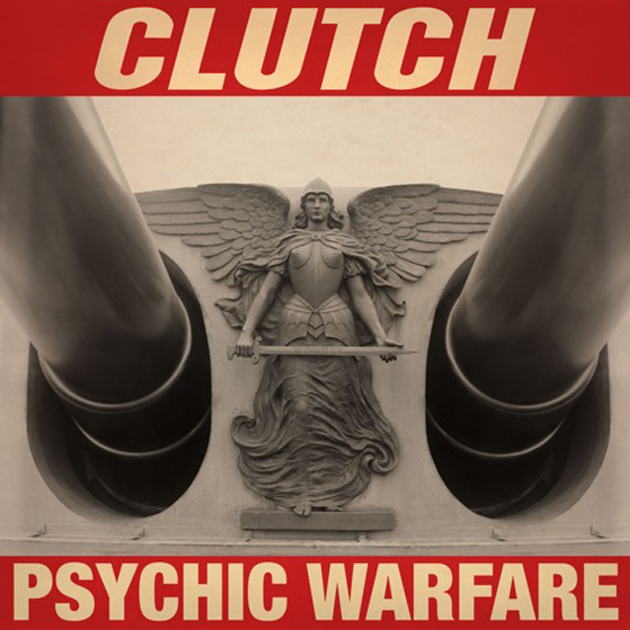