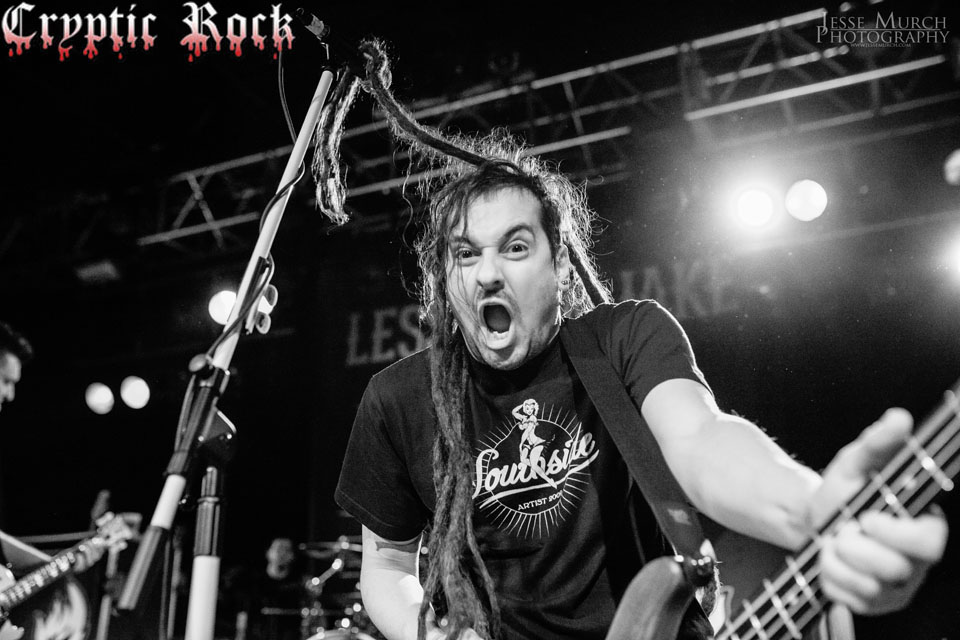 Twenty years into their journey, Gainesville, FL natives Less Than Jake are celebrating their music in style with a stellar group of bands. On Saturday November 9th Less Than Jake show up once again to dazzle Starland Ballroom attendees with their energetic and lively performances. Consisting of a group of long time friends: Vinnie Fiorello on drums, Chris DeMakes on guitar, Roger Manganelli on bass, Peter “JR” Wasilewski on sax, and trombonist Buddy Schaub. These guys have sustained the same line-up since 1993 with exception of Peter “JR” Wasilewski which was added to the fold 13 years ago. Longevity is pronounced loudly with Less Than Jake and these seasoned veterans know how to engage their fans with stage hi-jinks, down to custom cereal boxes covers, to unique vinyl printing. To be around as long as these guys have you need to know how to satisfy your fans, and they have mastered that art. This would be the first night of the two day ska extravaganza known as Skanksgiving. It’s nice to see, with the re-opening of Starland Ballroom after the devastating damage due to Hurricane Sandy last year, this annual event to make its way back here.

This all day festival kicked off at 3:30 PM with a handful of local openers consisting of Backyard Super Heroes, Unbearable Slackers, and No Such Noise. The first of the headlining ticket bands was Blairstown, NJ own Survay Says, whom have been touring since mid October with legends of the genre Big D and the Kids Table. Forming in 2008 this 7 piece ska/punk band has spent the last 5 years honing their craft to bring their fans the absolute best in horn driven music! Playing over 150 shows in 26+ states last year alone and tour with role models such as Big D, it’s safe to say Survay Says is here to stay and continue making strives for NJ in this genre.

Following Survay Says were fall tour mates Red City Radio hailing from Oklahoma City, OK. This band is the definition of punk rock. They arrived on stage with simplistic guitar riffs, catchy vocals, and hard hitting drums. With a handful of full lengths and EP’s under their belt, their newest album Titles has been seeing very positive reviews all over the internet. Their performance was short, heavy, aggressive, and punk rock perfect, enough to make the legends happy.

Mustard Plug’s Jim Hofer, the bands trombonist, has explained the bands goals as “ We may have some meanings in our music, but we do it because we love it, and we just want people to have fun to it”. This definitely sums up their stage presence perfectly. Lead vocalist Dave Kirchgessner arrived on stage with his famous wardrobe consisting of a 40’s suit and Ray Bans, creating a vibe out of the 40’s flapper club scene. The energy they had on stage electrified the room, and the whole time it was hard not to notice the immense fun each member was having. Now together since 1991 with 6 studio albums to their credit and endless touring around the world, it is safe to say Mustard Plug is having more fun than ever and will continue to for many years to come.

Up next were Ska legends Big D and the Kids Table. From Boston, MA this band has made quite a name for themselves over the past 18 years. These dedicated musicians have averaged playing 200+ shows a year, released 10 studio albums (one being a “gangsta rap”), 6 EP’s, 5 Split EP’s, and 13 music videos. This would be beyond impressive within itself, but it gets better, they have self produced it all. That type of do it yourself mentality shows why they always have and always will have one of the biggest and most loyal fan bases around. At this point in the evening Starland Ballroom was packed and everyone migrated toward the front to get closer to the action of Big D’s high energy and loud horns. Even with minor technical difficulties this band didn’t miss a beat in their performance. You can be certain each attendee knew the words to more than a few of their songs and with good reason, this band is just plain fun to listen to and watch. Their energy level projects a party like atmosphere you are bound to have fun at, and if you have not already seen them, we highly recommend you do soon.

Big D and the Kids Table

With an already jammed packed day of talented bands it was time for the guests of honor with Less Than Jake. Their latest album See The Light hit stores earlier this week, and it marks their 9th studio album since forming in 1992. Although they are technically categorized as a ska band they have not been shy to step out of their genre and share the stage with acts such as Korn, Snoop Dog, and The Used. This type of diversity has gained them recognition well out of the Ska scene and respect from all types of music fans.

Their set started off with the song “Good Enough” which pounded with energy, engaging through each fan in the room and even us photographers many times throughout! Their performance really showcases that this band is far from good enough, they are great and masters of their craft. As if they didn’t give enough to their fans with a solid balanced fourteen song set list, each member eagerly came back on stage to fuel the fire with three more songs. This was a magnificent retrospective of the last 21 years with Less Than Jake. With love for music, dedicated fans, and sure will who is to say we won’t be back here in another 21 years for a bigger celebration! Less Than Jake set the bar for this festival and with their United States tour ending December 5th we say go get a ticket and sit back and enjoy a fun filled ride while you still have the opportunity.