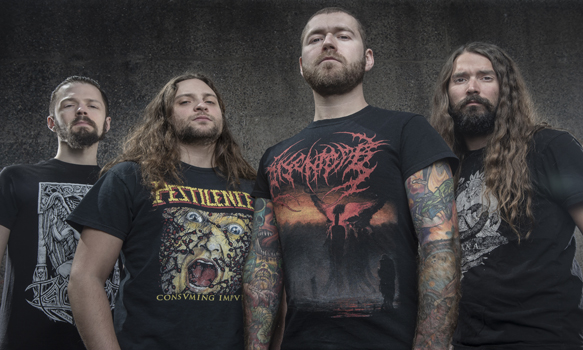 Hailing from Boston, Massachusetts, Technical Death Metal band Revocation has been in the game for over sixteen years now. Operating under the name Revocation since 2006, following the independent release of their debut Empire of the Obscene in 2008, the band was signed on to Relapse Records. Important years in the band’s development, 2009’s Existence is Futile and 2011’s Chaos of Forms paved the way for one of their most successful records in 2013. Proof that Death Metal has a place in US Billboard 200, the 2013 self-titled entered at #159 and showed the amazing potential of the band. Switching to Metal Blade Records, 2014’s Deathless shattered all previous commercial success, and put the band in their genre’s elite rankings.

Ready to the take the next step, in 2015 they brought on former 3 Inches of Blood Drummer Ash Pearson as the band moved into some new areas, drawing from his influences outside of Metal. Replacing founding member Phil Dubois-Coyne, Revocation embraced the challenge of recording their latest album, Great Is Our Sin, with band members spread out across North America. Once again employing the talented Zeuss, they made it work with the end result being a complex, layered, and nuanced album. With Vocalist/Guitarist David Davidson, Guitarist Dan Gargiulo, Bassist Brett Bamberger, and Drummer Pearson coming together as a force, they have upped their level of musicianship and willingness to take chances. With that said, there is more than enough brutality to make this record an extremely interesting Metal experience.

Coming on fast with “Arbiters of the Apocalypse,” before long, the track settles into a heavy groove. Vocally, the vibe is gritty and raw with some solid, clean backing vocals to provide the catch. Next, “Theatre of Horror” comes in with Pearson’s rapid-fire drumming in the distance. When the band joins, the track jumps out and moves through a few different feels. Technical riffs and drumming are combined with open melodic phrases drawing the listener in with hooks, while remaining powerful and heavy.

Continuing the motion, a slick intro falls away, revealing the thrashing cut “Monolithic Ignorance.” Here, Davidson’s voice is dark and powerful, as are all the vocals that evolve throughout the song. In addition, Gargiulo adds heady leads with plenty of lift elevating the track and adding another element of interest. A bit of a departure, “Crumbling Imperium” is a song Bamberger plays a complex bass pattern and locks in with Pearson, providing an interesting structure. Warped guitar riffs add an unstable element to the song before Davidson pulls it all together with his vocals combined with Gargiulo to create intriguing guitar passages. Blistering, “Communion” is a tight bundle of brutality held together by the entire band displaying a technical blend of syncopated rhythms and straightforward speed. This is all while complex riffs twist and invert throughout until abruptly closing out the song.

The halfway point of Great Is Our Sin finds an instrumental titled “The Exaltation.” Filled with depth and complexity, this track moves at a good pace and has an upbeat feel while compelling lead guitar work inhabits it, pushing emotions to the brink. Speaking of pushing boundaries, “Profanum Vulgus” is comprised of many styles woven together, retaining heaviness, despite some of its less Metal elements. A strong balance is achieved and the transitions between feels are seamless. Then, with complex guitar rhythms making up the meat of the song, “Copernican Heresy” sees Davidson delivers impassioned vocals. Matched by Pearson’s deadly precision, it adds to the stellar lead work that completes the package.

The penultimate track of the album comes with “Only the Spineless Survive.” Musical and moving, the composition has many layers, not the least of which are the spoken word passages. This is while thick guitar riffs and equally thick vocals add a straightforward quality. Pounding drums fill the backdrop with a thudding pulse and groove laden riffs, bringing the song to a stomping conclusion. Finally, “Cleaving Giants of Ice” is an epic close to the record; with a deliberate pace, it anchors the melodic vocals and overall anthemic feel. Possessing a decidedly more open and airy quality, it bringing the listener almost gently back to reality after a breakneck ride on a runaway train.

Overall, Great Is Our Sin threatens, but is never overwhelming. Many chaotic elements are carefully constructed, bringing the music to the edge while maintaining overall control. All that in mind, Revocation has pushed their own limits again, creating a more technical and more musical record this time around. CrypticRock gives Great Is Our Sin 4 out of 5 stars. 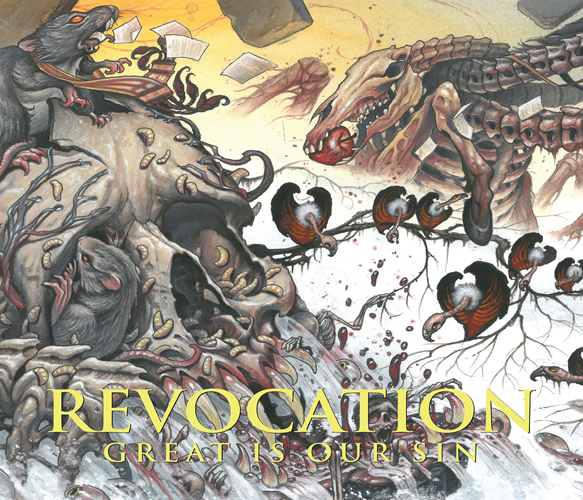