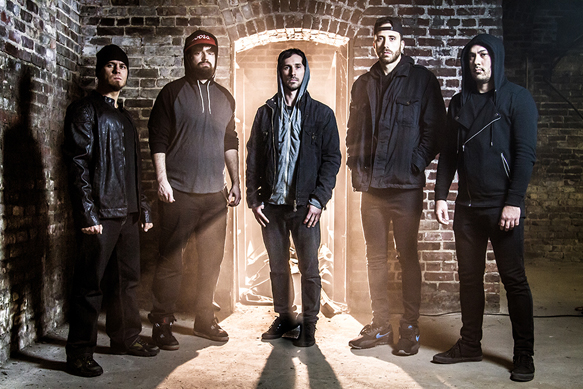 In 1999, 10 Years formed in Knoxville Tennessee with lead singer Mike Underdown, drummer Brian Vodinh, bassist Lewis Cosby, as well as guitarists Ryan “Tater” Johnson and Matt Wantland. Independently releasing their self-produced debut album Into the Half Moon in 2001, the same year Underdown and Cosby departed from the band, thus ushering in the long standing vocalist Jesse Hasek, along with new bassist Andy Parks for a year, before Cosby returned to the fold until 2012. While the changes have been many for the band in form of lineups, the mainstays Hasek, Johnson, and Vodinh (writing & producing only since 2012) remain the catalyst of this well-oiled machine. Signed to Universal Records, the band’s 2005 album Autumn Effect garnered 10 Years their first charted album and a single, “Wasteland,” which went gold in February 2006 and was nominated for Best Direction and Art Direction at the 2006 MTV Video Awards.  Progressing from album to album, two follow-up records, Division in 2008 and Feeding the Wolves 2010, found them at the pinnacle of the Hard Rock world, providing this band was here to stay. More a band about music than numbers, they declared their independence from Universal, for more artistic freedom, and released perhaps their most in-depth record to date in 2012 with Minus the Machine via Pale Horse Records.  Now after three years of touring, their 2013 Live & Unplugged at the Tennessee Theater album, and writing, 10 years are back with new album From Birth to Burial released on April 21st. Marking their seventh overall album, and one highly anticipated by fans, many wonder what direction the band will go this time around.

From Birth to Burial is a fusion of three sub-genres many have classified 10 Years; Alt-Metal, Post-Grunge, as well as Progressive Metal, for their searing guitar work and driving drums.  Ask the band though, they probably would ignore any labeling, as they just make the music that feels right to them. For instance, the album’s title track’s intro begins innocent enough with a two-beat piano, but closer listening has a guitar playing backwards, skewing the simple acoustic sound.  Hasek’s ominous vocals creep through announcing that “you’re next to love me” as the drums shatter the tranquility. Next, “Selling Skeletons“ has a psychedelic intro before the bombastic drums and guitars slice with Hasek’s singing a satirical piece on media vultures looking for a person’s skeletons to sensationalize, “Everything falls apart, keep relying on dead stars. With everyone’s eye on the prize, we kiss our loyalty goodbye.  And it should come as no surprise…” “Desperately selling skeletons, until there’s nothing left of me.”  “Vertigo” sees the return of the piano intro into a Pop-like drum beat and the synthesizers giving an Orgy-esque Gothic Pop melody to follow this song of a whirlwind relationship with someone, who perhaps is bi-polar, featuring the lyrics “Around and round, we go with the rise and fall of your vertigo.”  Then, “Triggers and Tripwires“ is a slam dance ride of hard hitting drums with jarring, yet melodic guitar play. The next track, “Luna“, has an ethereal, laid back feel belying the dark, almost religious, love song lyrics.

As a perfect alternative to the other songs’ styling, “Crimson Kiss” talks about the delusion of youthful immortality while having an array of beauty and aggression executed by Hasek vocally. “The River“ is a piece parable of life’s uncertainties and includes a drumline that feels desperate to convey a message of experience. Here, Hasek’s vocals shine bright with notes that resonate in a powerful fashion, perhaps more because of the context of the words. Making piano an important part of their composition for all of From Birth to Burial, they bring Ashes to life before strong bass guitar that follows throughout the track cut by a intense lead guitar and understated, but equally important sweeping drumline. Hasek’s voice once again convey the inevitability from whence we began, so shall we return…Ashes. Meanwhile, “Survivors?” could be one of the most haunting songs on the album with roomy guitars/drums before Hasek asks a simple question to a short, but powerful song… “Are there any survivors here.”

“Miscellanea”, which was a single released before From Birth to Burial fully dropped, has a deep, eerie feeling with the pianos sliding in and out of the song towards its conclusion.  Conveying a message of seduction and selling the soul for a bit of pleasure only to to be brought down by a disease send a striking message lyrically which is matched by the sheer emotion of the song.  The final chapter in 10 Years’ latest journey is “Moisture Residue“, which is almost a continuation of the prior tracks tonally as pianos dominate, accompanied by synthesized violins like a slow drip. Hasek’s vocals are silky smooth in a dreamy telling of the end of his life, and how his death affects those he is leaving behind with fading memories…”Moisture residue, slowly killing you.”

10 Years’ dark, satirical social commentary of From Birth to Burial sets the band on par with predecessors such as Nirvana, Pink Floyd, or the Dead Kennedys.  Songs like “Vertigo“ could be taken as a literal piece along with “Triggers and Tripwires,” “Luna,” “Crimson Kiss,” “The River,” “Miscellanea,” and “Moisture Residue“ with the album as a whole having a desperate need to be heard.  This could be one of the band’s heaviest album to date, in more ways than one. Inevitably, it is a cohesive piece which demands it be listened to from start to finish and not pieces apart for single serving downloading that has become so prevalent in modern society. Truly a masterpiece for this highly underrated band, CrypticRock gives From Birth to Burial 5 out of 5 stars. 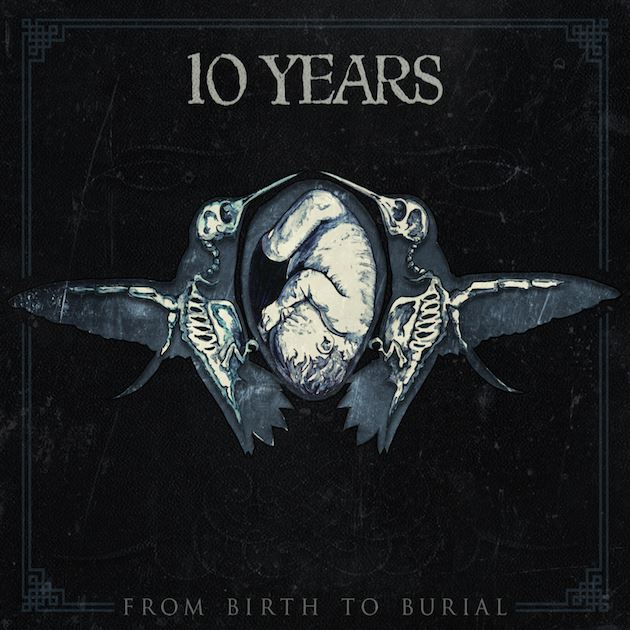