25 Years of digging on Tremors

There is something about well-placed scare following a comedic sequence that gives people giddy, if not nervous giggles.  The Comedy/Horror genre has been popular as far back as 1920 beginning with Haunted Spooks. Ninety-five years later, nothing has changed. That is why the film Tremors continues to be popular and profitable twenty-five years since its initial release on January 19, 1990. Coming onto the scene when other Horror flicks like Nightbreed, Arachnophobia, and Child’s Play 2 were dominating the box office, Universal Studios had a vision for a full on creature feature providing a different spin to the genre. Directed by an accomplished Ron Underwood (Deer in the Works 1980, City Slickers 1991), produced by Gale Anne Hurd (The Terminator Trilogy), along with screenplay writers Brent Maddock and S.S. Wilson, Tremors also featured completely practical creature effects handled by Amalgamated Dynamics. Along with a stellar cast of Kevin Bacon (Footloose 1984, Apollo 13 1995) as Valentine “Val” McKee, Fred Ward (Escape from Alcatraz 1979, The Right Stuff 1983) as Earl Basset, Finn Carter (How I Got Into College 1989, Ghosts of Mississippi 1996) as Rhonda LeBeck, and Michael Gross (Family Ties series) as Burt Gummer, Tremors was a movie with a lot of intrigue, down to the original film poster not revealing the actual creature. 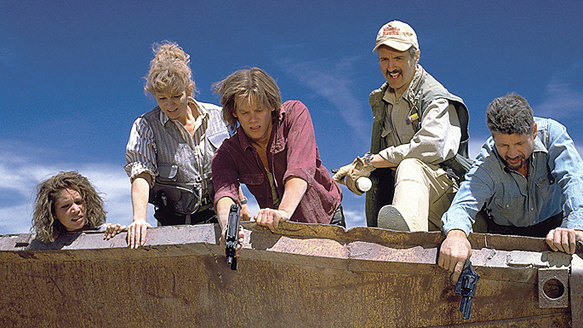 The film begins with Valentine McKee and Earl Basset, who are bumbling handymen, in Perfection, Nevada, an almost ghost town of ex-mining settlement in the high desert east of the Sierra Nevada Mountains. They are headed back into town for breakfast when they see a lady messing around in the scrub. She introduces herself as Rhonda LeBeck, a graduate student conducting seismology tests. She asks the guys about mining detonating, and they scoff, but say they will tell her if they see anything, before leaving her to get that breakfast. In town, which has fourteen residents, among them general store owner Walter Chang (Victor Wong: Big Trouble in Little China 1986, 3 Ninjas 1992), and survivalist couple Burt and Heather Gummer (Country singer Reba McEntire: The Gambler Returns: Luck of the Draw 1991, Reba series). They talk conspiracy theories about World War III, and  while they talk, Rhonda continues her readings, but does not realize the seismograph suddenly start spiking.

Back at their trailer, Val and Earl talk about their worthless existence, and they decide to leave for the nearest town, Bixby, but are stopped by Nancy Sterngood (Charlotte Stewart: Cannon series 1973, Little House on the Prairie seires) and her pogo stick jumping daughter, Mindy (Ariana Richards: Jurassic Park 1993, Tremors 3: Back to Perfection 2003), who tries to bribe them to stay with a job and beer.  Declining, they head back on the road to discover another resident, Edgar Deems (Sunshine Park: The Dukes of Hazzard series 1979, Road House 1989), dead at the top of an electrical tower, still holding on to the beams with a .30-30 Winchester rifle. Edgar died of dehydration according to Dr. Jim Wallace (Conrad Bachmann: Foxy Brown 1974, Eight is Enough series). On the other side of town, Old Fred (Michael Dan Wagner: Happy Days series 1974, Wonder Woman 1977) and his flock are attacked from underground. Meanwhile, the seismographs are going crazy. Continuing to Bixby, Val and Earl are talking about possible scenarios of how and why Edgar was in the electrical tower. Suddenly, Val slams on the brakes, and jumps out of the truck at Old Fred’s to sheep carnage. Of course, they think a killer is on the loose, and head back to warn the town, but stop to warn two construction workers. Carmine (John Pappas: The Merv Griffin Show series) continues jack-hammering, and has an accident.  Val and Earl make it back to town to find the phones dead, and a surprise wrapped around their truck’s back axle after they get back when the road out of town is mysteriously blocked. 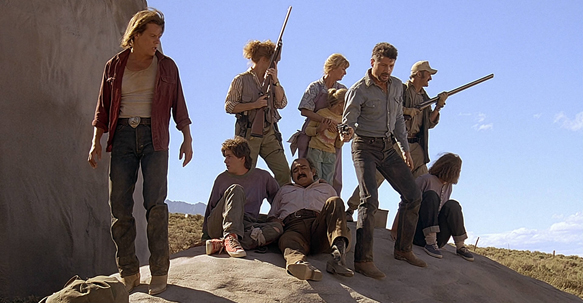 That night, the doctor and his wife’s (Bibi Besch: Star Trek II: The Wrath of Khan 1982, Who’s That Girl 1987) car gets sucked underground. Devising a plan to get help on horseback, the guys find the doctor’s car. Trudging on, they hear a roar, and get attacked to which they have to run to the aqueduct to possibly escape. At the same time, Rhonda catches up to them, and sees what attacked them. She examines the dead creature, and realizes whatever they are, they have supreme hearing…and there are three more.  As the seismograph’s meter spikes again, Val, Earl, and Rhonda make the trek back to her truck; however, wherever they go, they get cut off by the creatures, so they have to spend the night on boulders.  After some arguing, Rhonda comes up with a plan to pole vault from boulder to boulder until they get to her truck. Back in town, people do not believe, like citizens, Nestor (Richard Marcus: And the Band Played On 1993, Dune 2000 1998) and Miguel (Tony Genaro: Anger Management 2003, World Trade Center 2006).  The ones that have seen term them as graboids.  Suddenly, the token jokester, Melvin (Bobby Jacoby: Iron Eagle 1986, Night of the Demons 2 1994) screams outside, and everybody sees him up the flagpole as a huge graboid crashes through the ground, forcing everybody into the diner. They try to keep quiet until they hear Mindy’s pogo stick. They try to tell her to stop, but she cannot hear them, because she is wearing her earphones, so they have to tackle her…as they hear a roar.

As the graboids attack, the group split up to hide in the houses…except Rhonda gets snagged on barbwire. Freed, the group are held at bay in the diner.  That is okay until the Pepsi machine starts making noise. From there, everybody except Melvin, who is stuck in an outhouse, takes refuge on the roofs. Then, Burt calls on a CB from his underground bunker, which draws the graboids to him and Heather. The CB goes dead, and the rest of the group think they are dead until they hear gunshot blasts. Knowing the graboids can be killed is a small victory.  The graboids are learning, going so far as making traps when Val and Earl devise a plan using a bulldozer. Demoralized, the group starts fighting until Earl decides to bait a graboid with a pipe bomb, which works…once.  Now, the group is separated.  With one bomb left, Val gets a stampede idea to try to kill the remaining and smartest graboid through the cliff face to its death. 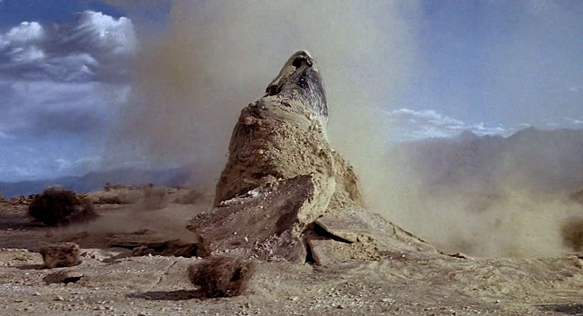 A modest success at the box office, Tremors earned approximately forty-eight million dollars on an approximately eleven million dollar budget, but the film’s biggest success came on the home video current, making it a massive hit. The impact of the film did not stop there as several television shows have paid homage to Tremors, include the 2001 Spongebob Square Pants episode “Sandy, Spongebob, and the Worm,”  2007’s American Dad episode “Four Little Words,” The Aquabats! Super Show’s! episode “Bad Apple!,”  and in 2012, Tremors was referenced in a NBC Nightly News story. The film’s successful theatrical run and its subsequent cult following garnered the film three sequels (Tremors 2: Aftershocks 1996, Tremors 3: Back to Perfection 2001, and Tremors 4: The Legend Begins 2004), and a short-lived 2003 TV series on Syfy Channel, that bridges 2001’s Back to Perfection and 2004’s The Legend Begins. Now nearly a decade since the last chapter in the story, it returns with Tremors 5: Bloodlines, slated for October 2015 where Val and Rhonda have married and moved on, and Gross’s returns to reprise his now legendary character of Burt Gummer. Needless to say, this film has achieved a massive impact on the genre and it upholds a tradition that can be carried on for generations of graboid lovers to come to dig on. 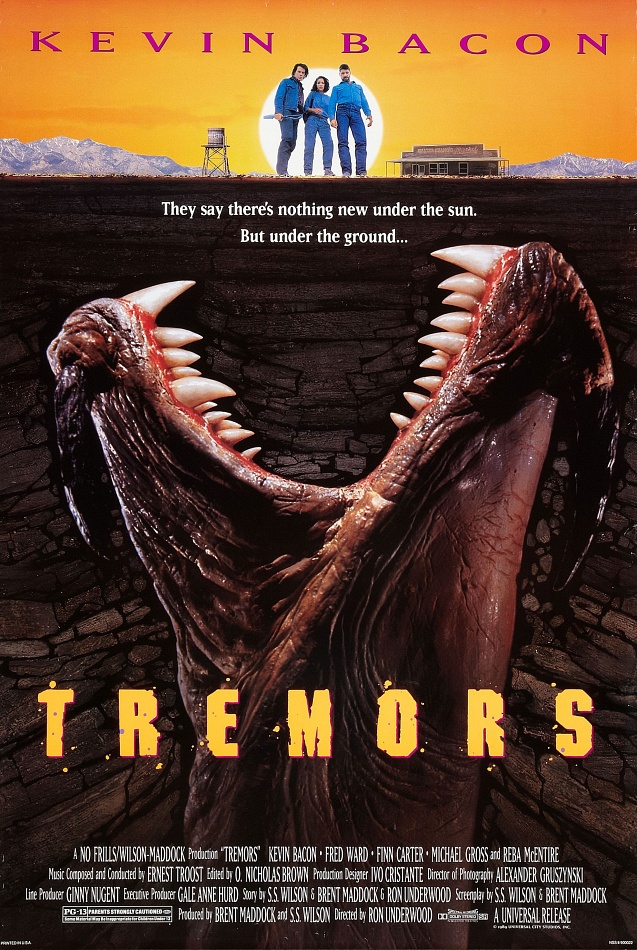 Purchase Tremors on Blu-ray/DVD on Amazon