In the 2000s, the Vampire genre was a mixed bag. You had the poorly done Dracula 2000 at the beginning of the century, the more action-based Blade series which ran through 2004, the cinematic disaster of Van Helsing in 2004, and the glossy Twilight of 2008. Thankfully, amidst all the debris, came the dark and intense 30 Days of Night back in 2007. Released on Friday, October 19th of 2007 by Production Company Ghost House Pictures and Distributor Columbia Pictures, originally a comic series by IDW Publishing, 30 Days of Night is arguably one of the most thrilling, horrific vampire movies of the 2000s era, if not ever. 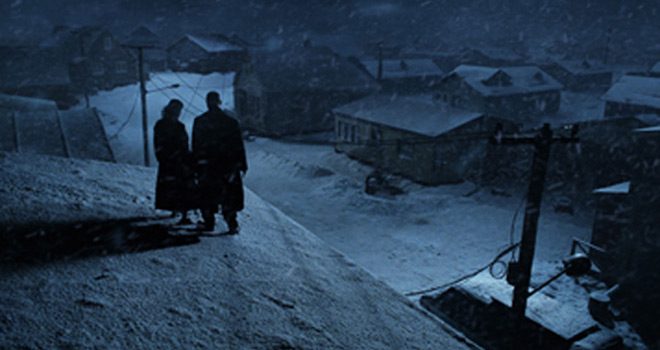 With a grisly tale to be told and all star cast, it is no surprise that it has had a cult following in the decade since its initial release. A screenplay written by Comic creator Steve Niles (Fear Itself series, 30 Days of Night: Dark Days 2010), along with Stuart Beattie (Pirates of the Caribbean: The Curse of the Black Pearl 2003, G.I. Joe: The Rise of Cobra 2009), and Brian Nelson (Hard Candy 2005, Devil 2010), behind the lense was Director David Slade (Hannibal series, American Gods series). With a cast including Josh Hartnett (Pearl Harbor 2001, Penny Dreadful series) as Eben Oleson, Melissa George (The Amityville Horror 2005, Triangle 2009) as Stella Oleson, Danny Huston (Children of Men 2006, Wonder Woman 2017) as Marlow, and Ben Foster (3:10 to Yuma 2007, Warcraft The Beginning 2016) as The Stranger, 30 Days of Night quickly became a leading Horror flick grossing nearly an estimated 16 million dollars in its opening weekend, making it number one at the time.

Released at a time where the Pop culture trend phenomenon of vampires was on high, 30 Days of Night certainly separated itself from the pack. Released 4 years after 2003’s Underworld, it seemed Vampire films were being dished out like an assembly line. The aforementioned Twilight also followed a year right after, and while to many is Pop trash, it would be a Pop culture mega hit, allowing a film like 30 Days of Night a chance to get overlooked or slip through the cracks. Fortunately, real Horror fans indulged in 30 Days of Night due to its darker content and plethora of killings, it is as far from a magical or adventurous tale as you can get. There is no romance or glitter. There are no latex bodysuits or lycans in this story. Nope, just plain ol’ fashion killing.

Born from the Comic book mini-series released in 2002 consisting of 3 issues, written by the aforementioned Steve Niles and illustrated by Ben Templesmith, whether or not the Comic and the movie are the exactly same is of little importance. That said, like many Comic books turned movies, there will always be some discrepancies, although imagery in both are simply amazing.

The story takes place in the small town of Barrow, Alaska, where for 30 days in the winter the sun does not shine due to it being so far north. As the film begins, the audience gets a glimpse of everyone is this very small community getting ready for the dark times ahead. In minutes, the bustling mini town goes from rushing around to leave the dark behind to silence with a few members of the town who decide to brave the winter tradition remaining. At first, nothing seems out of the ordinary, but as the story progresses, there are small details that hint that there is something going on that will wreak havoc on the tiny town. 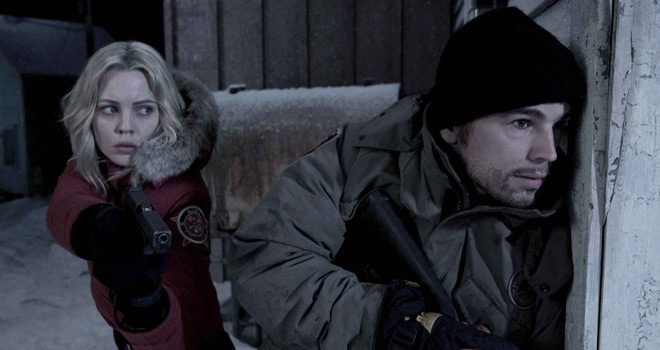 The story surrounds an estranged couple, Eben and Stella Oleson. After being separated for some time, they end up crossing paths when Stella’s ride gets into a fender-bender that causes her to be late for her flight, which is the only way out of town. Not having the option to leave town, she makes her way back, hoping to avoid any run-ins with her ex-beau, only to be one of the first people she ends up making contact when she enters the small settlement.

Then there is The Stranger, who is shown at the beginning of the movie strolling into town from what seems like shit docked in the shore not too far from the limited amount of civilization. As everyone knows, a stranger strolling into town is a worst-case scenario. With The Stranger causing conflict in their neighborhood diner and the police force being run with a skeleton crew of members, Eben is quick and on the scene with his ex soon to make an appearance. Now, a romantic conflict is usually not of interest in Horror movies, but this conflict helps push the storyline along and it is somewhat intricate to the movie as a whole.

Now, with most Vampire movies, it is either backed by a story of love or tragedy, historical references or a menagerie of mythical creatures and monsters. This completely blows all those backstories out of the water. Like the previous creature of the night flicks, there is no Dracula nor tales of a forgotten warrior who made a deal with the darkside. There is no relationship between predator and prey that flowers into an alliance. No, there is just carnage.

At this point, most of the town is getting freaked out by The Stranger and his appearance in their small town. They head to the jail to put our beloved newcomer behind bars. Still a little slow in the beginning with seemingly useful introductions to the story and characters, it starts to pick up when there is a call from a resident saying that all the sledding dogs they own have been viciously killed. Hmmm…. Nothing suspicious still, that is except all the cell phones in town have been taken and burned in small sacrificial cell fire. Oh yeah, and then a helicopter is torn apart and thrown into the town’s sewage system, and so begins a night full of terror. 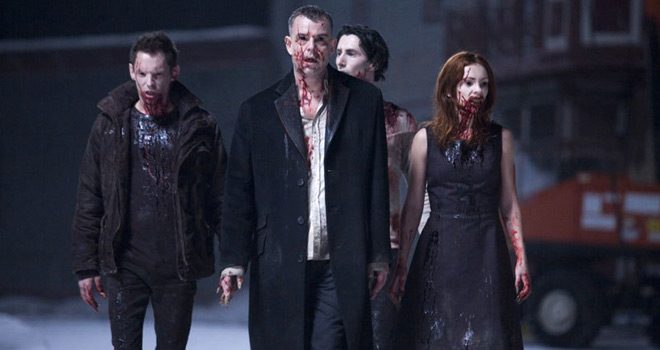 Right away, the audience starts to get a feel for what the next 29 days are going to be like. A little clichéd at times, 30 Days of Night still differed from its predecessor in that there is no happy ending. Not a smidgen of one and that is great because it makes the film so much more unique and appealing.

Speaking of appeal, one of the most appealing aspects of 30 Days of Night is the vampires themselves. They are not the poetic, whimsical, narcissistic characters everyone has come to cherish, nope they are unique and semi monstrous creatures with a thirst for blood so heavy that they will stop at absolutely nothing to get it. They, unlike vampires in most movies, look slightly “unhuman,” their teeth seem to be razor blades… all of them, their eyes are black. There is no ethereal blue looking pupils, just black.

These creatures also seem to speak in shrieks, which do have some monologue in their own language. Unlike previous films of this type, these vampires seemed so much more about chaos than anything else. This is effective thanks to the dark and gloomy atmosphere of the film. Filled with rage and despair, it helped that these creatures looked just like the grisly and loathsome abominations that they were.

All this is great, but what about the special effects, an aspect that can make or break any modern day Horror film. Well, the effects in 30 Days of Night are pretty awesome. Yes, there was some CGI, but every movie made during the era, what matters is how it is used. Surprisingly, this movie did it just right, especially with the blood effect. This with great cinematography; the aerial view during the mass kill scene is horrific yet amazing at the same time as it shows the contrast of blood red on white snow. Since most of the movie is in blacks, greys, and offset whites, the deep but bright blood hue helped make every kill scene that much more dramatic. 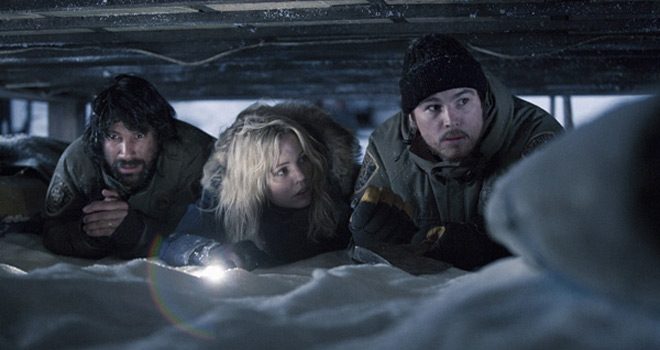 Coming in at number 69 as one of the highest grossing films of 2007, critically, views were panned. Some felt the film had plot holes, others felt there were few thrills, and some marvelled at the imagery. Whatever it may be, in the eyes of Horror moviegoers, it was a must-see that year. Simply put, 30 Days of Night offered something other Horror flicks at the time did not, its own style and a ton of blood. In the Horror community, it was not overlooked, with Slade going on to be nominated for several awards that year for best Horror movie, and best make-up. So what do critics know!

All this said, the impact of 30 Days of Night is much stronger than one would think. In fact, prior to the actual theatrical release, a 7-part Horror mini-series entitled 30 Days of Night: Blood Trails ran September 13th until October 18th on the now defunct FEARnet channel acting as a prequel. Furthermore, the  6-part series 30 Days of Night: Dust to Dust was released in 2008 via FEARnet. Set one month after the events in the movie, the series would also be followed by the the full-length feature 30 Days of Night: Dark Days in 2010.

Even a decade later, 30 Days of Night is an enjoyable modern Horror film. A film that should be unearthed for broader recognition, it reminds Horror lovers how great a film of this type can be when left to the basics of being bloody, gloomy, and haunting. 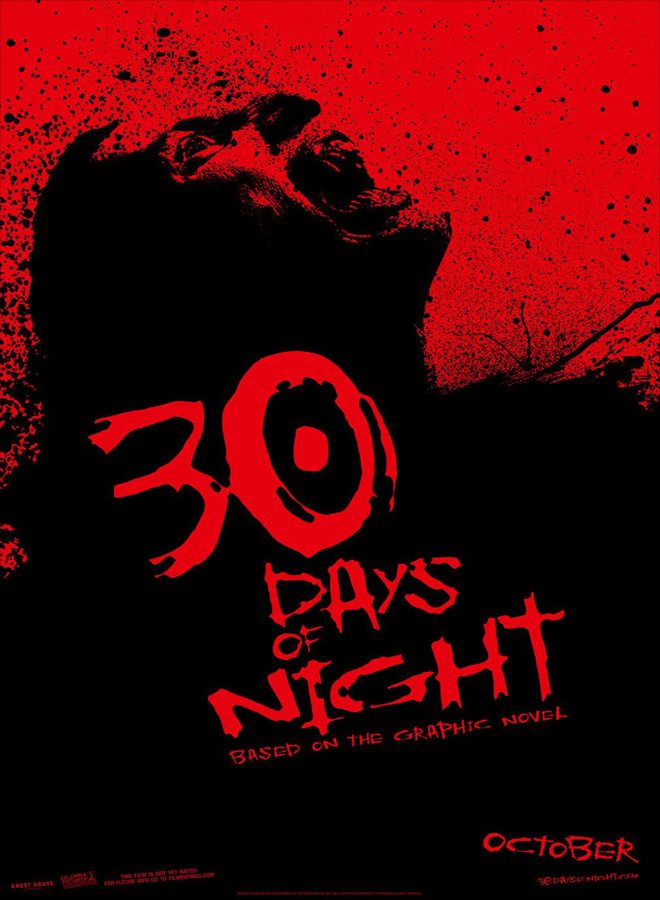