Filmed in four weeks just outside Rome, Andrea Bianchi’s Burial Ground, a.k.a. Nights of Terror, was unleashed upon Italy on July 9th 0f 1981. Following in the wake of the success of Lucio Fulci’s 1979 film Zombie, AKA Zombi 2, Burial Ground found infamy for its sleaziness and over the top gore/characters as well as its distinct style. Now celebrating its 35th Anniversary, Burial Ground has achieved cult status among genre enthusiasts, as well as stunning audiences across the globe, for all the wrong reasons. 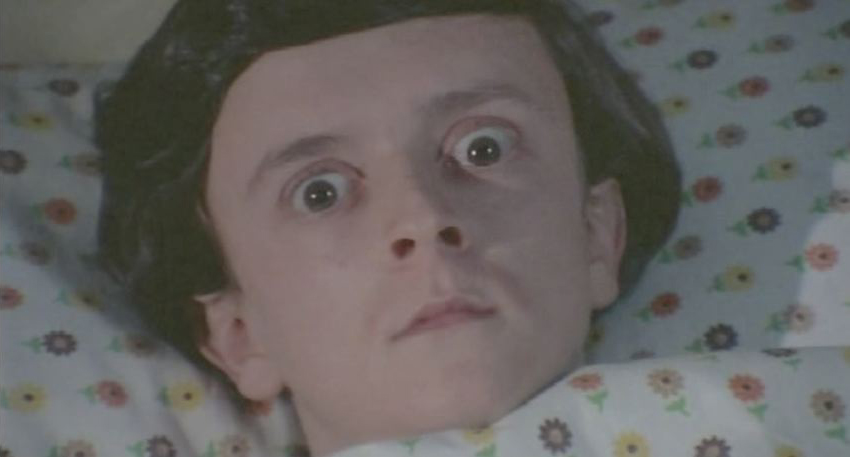 Opening with a former part-time member of ZZ Top hammering away at a stone wall, he removes a small plaque with a big smile on his face, then brings it back to his office. The audience soon discovers that the man is actually some kind of scientist who has discovered a secret that he just cannot believe. This leads him back into an underground cave where he is met by a gnarled Zombie who proceeds to devour him, along with another Zombie pal, even after the man exclaims that he is a “friend”! Those Zombies sure are rude eh? Thus begins Nights of Terror!

Following the juicy opening, the rest of the main cast is introduced as they make their way to a Villa isolated in the countryside. Pretty much well before anyone spends more than an hour at the house, most of the adults are knocking headboards while the creepy “kid” – Michael, played by the infamous Peter Bark – looms in the shadows, spying on his parents attempting to give him a sibling or just mess up the bed, either way, he is discovered by his mother who proceeds to jump out of bed fully nude, kind of covers up, and scolds him. Why she did not just cover up in bed is curious…but that is the way the cookie crumbles.

The next day, the cast is hanging out having a meal and then decides to separate to enjoy the remainder of the day prancing about the grounds. Prancing mostly means getting down and dirty in the, well, dirt, after a bit of frolicking. The “family” decides to check out some pieces the professor (bootleg ZZ Top) has found and Dad makes a few lame attempts at getting Mom hot n’ bothered again. See? Sleazy.

Well, unfortunately or perhaps thankfully, the professor’s actions from earlier in the film has apparently awoken more than two Zombies who just now decide to pop up and spoil the fun. This, of course, leads to a rather compromising situation for the humans who are attacked by the walking maggot farms, and sends them into a panic. It is not before long that the surviving members of the cast make it back to the Villa and the relentless siege from the Zombies continues in one gory scene after another.

All these years later, Burial Ground is well-known for a few things, those being the rather impressive Zombie make-ups and the overabundance of gore. Ranked as one of, if not the goriest Italian Zombie film to date, the general sleaziness felt through most of Burial Ground is plentiful. Seriously, if the cast is not trying to fornicate, they are fighting Zombies, that is their range, and of course, Peter Bark.

As mentioned earlier, there is a “kid” in the film that has a rather interesting relationship with his mother. Because of this “relationship,” he wants to sleep with her, and obviously the producers of Burial Ground could not hire a real kid to play the part of the mother’s young son. Instead, they hired a then 25 year old, named Peter Bark, who was also a midget and, apparently, was passable as a young child. Side note, he was totally not passable for a child, which became quite possibly the most talked about aspect of Burial Ground. That, and the finale, which coincidentally also involves Bark…so it comes full circle. 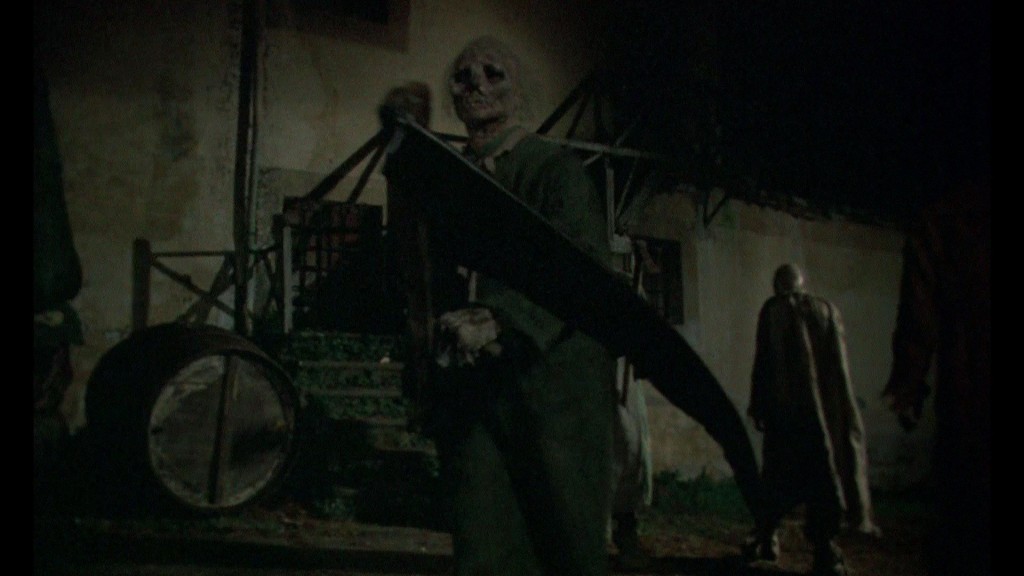 While Mr. Bark is possibly the most infamous aspect of the cast, it has to be said that the rest of the cast provides some memorable performances as well, and mostly not for the right reasons. There are several scenes where the characters’ facial expressions pretty much say it all, unfortunately, they seem like they are not sure what exactly it is they are trying to say. Several scenes certainly express terror or fear fairly well, but anything further beyond that seems rather alien, which makes for some very interesting “love” scenes.

However, the real stars of Burial Ground are of course the Zombies themselves. Whether intentionally written that way or not – the Zombies are actually much more intelligent than the humans on pretty much every level. Not only do they sneak up on their victims, they use tools, can scale walls, and master a battering ram with ease. Meanwhile, the cast seems to sneak around making as much noise as possible and does very little when it comes to self-preservation.

For example, one of the characters is left alone in an armory – she also has a bum leg at this point, so essentially she is fairly useless – while Zombies are banging away at the doors/windows outside. The butler, who brings her into the room, for whatever reason in the first place, decides to leave her behind while he goes to fetch her husband and other folks, again, why is anyone’s guess. So of course the Zombies get in and the girl grabs a rather large spear – good move. Well, that extends her survival skills all too well as within seconds of the Zombies getting in, she is on the ground and essentially waving the spear around blindly, which of course does very little to stop the Zombies closing in. Of course a few folks finally come in to save her, but they somehow get overpowered by the Zombies as well, despite outnumbering them in this scene specifically.

This is one of many examples of each character exemplifying increasing questionable methods of survival. Meanwhile, the Zombies are breaking down wooden barriers with axes and have mastered throwing spikes to trap their victims. Intentional or not, most of this film, the audience is rooting for the Zombies to take care of business. Furthermore, Burial Ground is truly a sight to behold; but one could not discuss the film without mentioning the memorable score, which is mostly tuned with Jazz numbers and strange synth sounds. There are more than several scenes where the score feels oddly out of place, but also very fitting and hard to imagine the film without it. If music can truly make or break a film; the score for this film does both.

Bianchi never became the household name such as Fulci or Dario Argento, despite directing several Horror efforts as well as a semi-decent stab at a Giallo with 1975’s Strip Nude For Your Killer. It is arguable that Burial Ground is the director’s most infamous effort worldwide, which stands to reason as it is the one film that is constantly referenced when discussing Italian Horror. Furthermore, Burial Ground has thrived on several home video releases, the first in The States being an overly dark print from the infamous Vestron Video, as well as a remastered widescreen version from Media Blasters, which was a revelation at the time, and more recently a Blu-ray via Severin Films. With each passing format, the film seems to find more fans who gawk at its absurdity and cringe at its incestuous subplot. However, even with its shortcomings, something about it remains all too endearing. 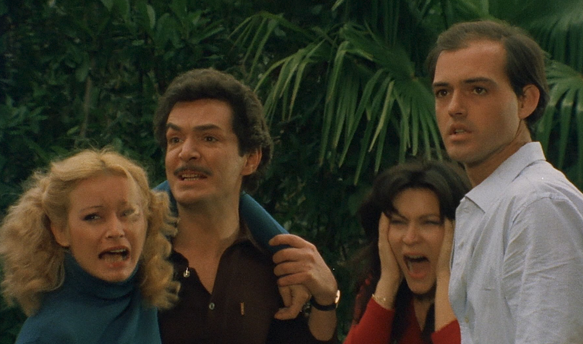 All this in mind, there is something to be said when a film manages to thrive after 35 years, and Burial Ground is a true testament to that statement. It is bizarre, it is oftentimes silly, and never quite reaches the bar it seems it wants to grasp, but somehow, is still highly enjoyable. Whether one is simply dumbfounded by the increasingly idiotic characters or enamored by the gore that flies across the screen, there is no doubt that the film has the power to entertain, even if it is not for the reasons the creators had intended.

Running at a brisk 85 minutes, Burial Ground never bores or overstays its welcome. The Zombie action begins fairly quickly, thankfully so, and seemingly never ends once the decayed corpses grace the screen. The undead are here en masse and continue to be featured in nearly every scene following their emergence. The original release of the film on Vestron Video had a blurb on the case that read simply; “You have to watch it to believe it!” More truthful words have never been uttered, because Burial Ground needs to be seen to be believed. 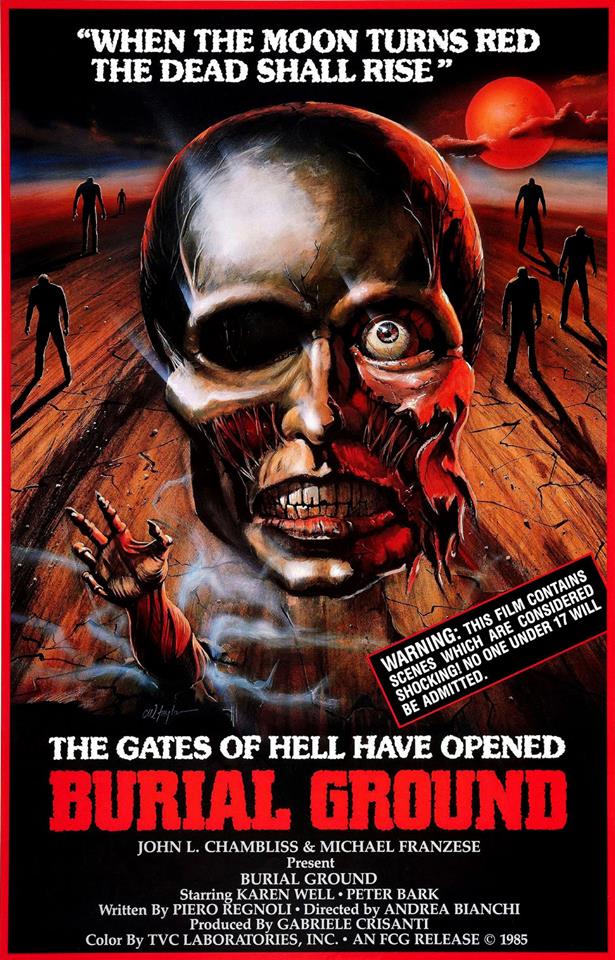