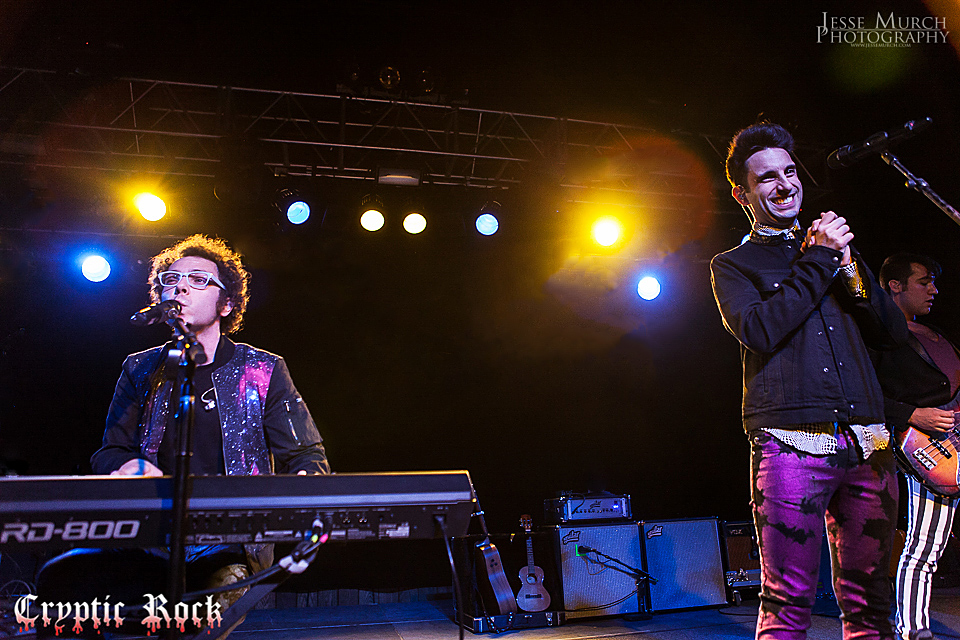 A Great Big World, the name should sound familiar to even casual listeners with their massively popular song featuring Christina Aguilera regularly played on radio. This New York native and NYU alumni combo of Ian Axel and Chad Vaccarino came together just two short years ago. Ever since then they have been climbing the musical charts as well as into the hearts of music lovers. With a sound that is fun, upbeat, and catchy – this duo has carved out a niche within the indie pop genre and are showing the world what A Great Big World is all about.  After releasing their debut album Is Anyone Out There? back in January the band announced their worldwide headlining tour. Appropriated named, “A Great Big World Tour”, the performances began in May as they continue to zigzag across the globe through August. On Saturday June 21st they came to Starland Ballroom in Sayerville, NJ with special guests Greg Holden and Jukebox the Ghost.

Up first was New York-based song-writer Greg Holden. Moving from London, Holden came to NYC back in 2009 to help further his musical career. Building a following one by one, Holden captures the attention of audiences with his folk-influenced soft rock styling and intimate singing voice. Performing a delightful acoustic set of his tunes, the silence around the room was merely a sign that Holden’s clever and honest storytelling had captured the imagination of all. Looking toward the future, Holden is taking the next step in his career as he prepares to release his new album at some point in 2014.

Preparing the stage for the headlining act, hailing from the nation’s capital – Washington, DC., was Jukebox the Ghost. Constructed as a three piece, the band consists of Ben Thornewill (Piano,Vocals), Tommy Siegel (guitar,vocals), and Jesse Kristin (drums). With a set which was comical and talent-filled, they played off of each other and the crowd as they interacted with musical shenanigans. The goofy on-stage antics should not deter any listener interest though, because this band is wildly gifted as well. Thornewill and Siegel harmonizing throughout their catchy, energetic songs such as newer pieces “Postcard” and “Made For Ending”, all while playing their instruments effortlessly. At one point Kristin proceeded to play tambourine and his full drum set at the same time. Jukebox the Ghost was high energy and positive all the way through as they concluded with an amazing rendition of Queen’s “Somebody to Love”. Sustaining the audience’s attention, their set was the perfect mood setter for the evening ahead.

With practically everyone at Starland Ballroom in high spirits, laughing, smiling, and having a blast it was time for A Great Big World.  With attention fixed upon the stage, the band started off with the tune “Rockstar”.  After the mild piano opening the guitars kicked in, adding punch and energy to the room.  Transitioning seamlessly into the happy beat of “Land of Opportunity”, A Great Big  World played fantastically and  had everyone feeding off the positive vibes.  Taking a moment to speak to the audience, the two musicians introduced the next song stating how honored they were to create the piece and how it meant so much to them personally. With that said, the keystrokes of the piano began and they broke out into “ Everyone is Gay”.  Lyrically a song which  speaks openly about atrocities against the gay community around the world, it is strikingly honest, yet vividly as playful as the rest of their tunes.

Keeping that energy flowing through the eleven song set, every moment was full of color as Axel and Vaccarino shined with compliments of a lively and tight backing band.  Showing class and appreciation for rock history they mixed in a spectacularly electric cover of  The Beatles “Got to Get You into My Life.  The chemistry of the two performers was strong as they fed off one another each and every song through.  Some of the great duo music groups such as Hall & Oates, Savage Garden, and even Air Supply come to mind watching the two perform live together.  With a variety of age groups in the room it was easy to see that A Great Big World’s reach is wide with their ability to combine meaningful songs and affectionate stage persona together.  Songs such as “”I Really Want It”, “Cheer Up”, and  “This Is the New Year” were just a couple of the memorable moments along with the somber, yet beautiful massive hit “Say Something”.  Lost in the moment of the music Axel’s face spoke a thousand words as he sang the hit single in an inspiring fashion.

A Great Big World are act which is rising fast as they continue to tour.  Their performance was not only entertaining and full of diversity, it was also a showcase of true human emotion in the form of music.  This is a band everyone will begin to hear more of as time goes on, and justifiably so.  Be sure to catch them on tour all summer long.