Sometimes passion for one project reigns supreme in one’s decision making. This could be said for famed Filmmaker Steven Spielberg, who actually passed over directing 2001’s Harry Potter and the Sorcerer’s Stone to make Sci-Fi Drama A.I. Artificial Intelligence. Introducing theatergoers to tragic android child David, the move to take on A.I. Artificial Intelligence was a bold one, but for Spielberg, is arguably his most endearing film fifteen years following its release. 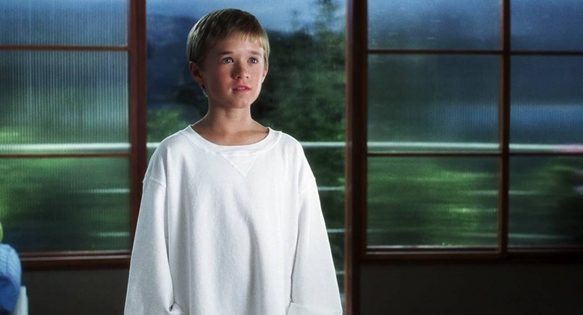 Released on June 29, 2001, A.I. Artificial Intelligence is the long-gestating brainchild of legendary Filmmaker Stanley Kubrick. Suffering through two decades of development starts, stops, and transitions, it went through showbiz hell. The journey began back in 1982 when Kubrick acquired the rights to Brian Aldiss’ short story, Super-Toys Last All Summer Long. Years passed, where he hired various writers to do a screen treatment, including Aldiss himself. In 1995, Kubrick asked Steven Spielberg to take over, feeling the film better suited Spielberg’s style. Even then, the movie didn’t gain momentum until Kubrick’s death in 1999. With respect to Kubrick, Spielberg left much of his influence in the film, gifting viewers a mesmerizing, disturbing, yet fitting swan song from the late master of movie-making.

Following “mecha” child David (Haley Joel Osment: The Sixth Sense 1999, Pay It Forward 2000) and his robot bear Teddy (Jack Angel: Toy Story 1995, Monster University 2013), David is a prototype android made specifically to ‘love’ a family who imprints with him. The film both parallels the ideas of and directly references classic 1883 story The Adventures of Pinocchio, but with a dystopian backdrop of futuristic technology and political hot topics.

His ‘parents,” Henry (Sam Robards: American Beauty 1999, Life As A House 2001) and Monica Swinton (Frances O’Connor: Bedazzled 2000, The Conjuring 2 2016), placed their biological son Martin (Jake Thomas: The Cell 2000, Corey in the House TV series) in suspended animation, waiting on a hopeless cure for a rare disease. Henry works for Cybertronics, the makers of David, and is given the opportunity to test David with his family. Monica is hesitant, feeling she is replacing Martin, but soon comes to love David – often reading Pinocchio to him at bedtime. She eventually imprints with him, locking in his love for her. 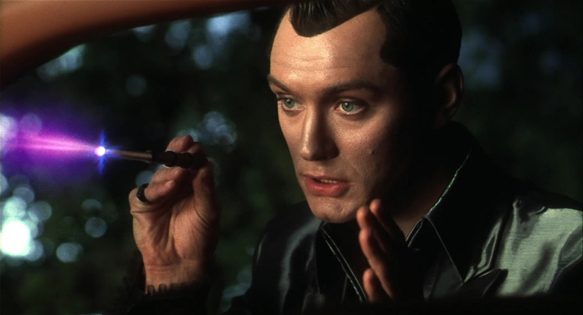 A cure is later found for Martin, but when he comes home, he is jealous of David, eventually convincing his father that David is a danger to the family. Henry tells Monica to take David back to Cybertronics to be destroyed, but she cannot, having formed a real bond with him. Instead, she abandons him and Teddy in a distant forest. David is hurt and confused, but eventually remembers the Blue Fairy from Pinocchio. He embarks on a quest to find her so he can become a real boy and have his mommy love him again.

Along the way, David and Teddy meet Gigolo Joe (Jude Law: Enemy at the Gates 2001, Sherlock Holmes 2009), a rogue mecha male prostitute. He is programmed to love, like David, but in the physical sense only. They must survive in a world where global warming has turned coastal cities into flooded ruins and anti-mecha sentiment streams from a much decreased human population.

They escape a ‘flesh fair’, then travel to Rouge City, a resort town where they consult with holographic Siri-esque helper “Dr. Know” (Robin Williams: Good Will Hunting 19997, Night at the Museum series). He leads them to flooded Manhattan, atop a ruined building where they find David’s creator, Professor Allen Hobby (William Hurt: Dark City 1998, Into the Wild 2007), who created David as a substitute for the loss of his own child of the same name.

Here, David finds that he is not unique, only the first in a mass production of David models. His existential crisis leads him to try and commit suicide by stepping off of the skyscraper and plunging into the ocean. Underneath the water, trapped with Teddy in the amphibicopter they flew to Manhattan in, David finds a Coney Island statue of the Blue Fairy. He stares at the statue and asks, repeatedly, for her to turn him into a real boy, until an ice age freezes the ocean around them and his internal power source drains away.

The cast delivered fantastic performances, with Osment and Law executing their roles as androids exceptionally. Their exploration of emotions and how to work, as mechas, within the confines of unregulated humanity highlighted the ideas behind the film. Robin Williams, as the voice of Dr. Know, was inspired casting. Two years before, he played the lead role in similarly-themed 1999’s Bicentennial Man. Ben Kingsley, Chris Rock, and Meryl Streep all had voice roles in the film and ABC’s Agents of S.H.I.E.L.D. star Clark Gregg played a “Supernerd.” 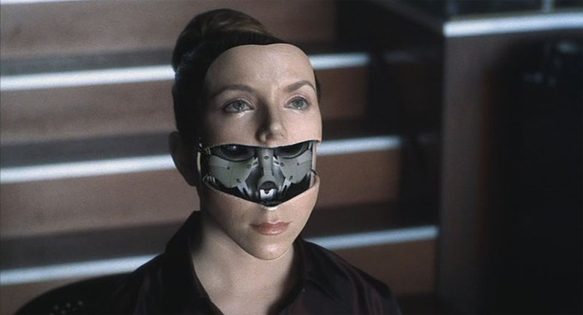 It is honestly difficult to know where to begin investigating the impact of this movie. Emotionally, this ranks at a level near 1988’s Grave of the Fireflies and 2009’s The Road. It swims in themes ranging from environmental destruction to the definitions of life and love. The problem, though, is that A.I. has flown under the radar of popular culture. Many people remember it when mentioned, but its parallels to today’s society and predictions it offers are rarely discussed, due in part to its slower pace and intellectual plot. Some critics went so far as to say the film did not work, but often ignored the inherent questions the movie raised, many which by their nature can not be readily answered. Thus, it has not had the cultural awareness it richly deserves.

Cherry-picking a bit, global warming is now an even hotter topic than it has ever been, pun intended. Sci-Fi has often read and predicted real life trends in the world and it seems that, despite what may or may not be causing it, the world is in for serious ecological shifts. Movies like 2008’s The Happening beat viewers over the head with over-simplified messages like this, but A.I. uses it as a background, or as one of a variety of self-destructive behaviors by humans that lead to the setting of the film. It is a simple message, but profound in how it is used as background paralleling real world changes.

The advancement of technology is used in the same way. Artificial intelligence has been debated for a long time, and even reflects classical philosophers’ ideas on creating machines that could compete with the gods. In the film, David, Joe, and other mechas are not portrayed as the enemy, but are used to ask what is life and how do we recognize it. Humanity rails against the purity of the mechas, mirrors showing their own depravities, with David acting as the paragon of love. 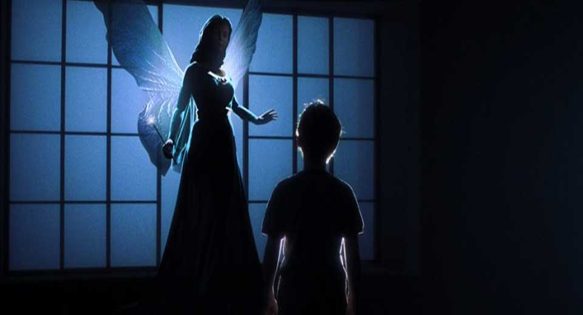 Beyond these things, Artificial Intelligence examines the nature of family, corporate interest over that of individuals, and peoples’ need for validation and inclusion in society. Everything it examines, everything it includes as part of the setting and plot, has intensified over the past decade and a half in the real world. Perhaps most impressive, though, is the emotional power the film still has over viewers, given its main characters are fictional machines of the future. Maybe this works because we are all David and Joe, searching for our own Blue Fairy to guide us, to tell us why the world is the way it is, and to give a place to fit in.

It is possible that A.I. Artificial Intelligence will be judged closer and closer to prophetic as our society continues, but do not watch it for everything that the world may become, but everything humanity could. 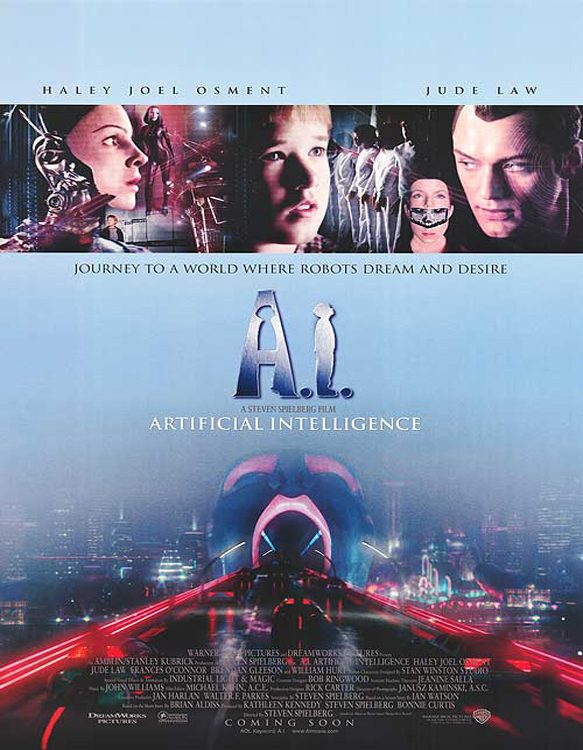 Lagaan: Once Upon a Time in India – 20 Years Later Fist of the North Star – 35 Years of Fisticuffs
Like the in-depth, diverse coverage of Cryptic Rock? Help us in support to keep the magazine going strong for years to come with a small donation.