Short film A Late Thaw, created by Director and Writer Kim Barr (Attachment 2009, Elevator 2013), deals with heavy themes of loss and moving on after the death of a significant other. Art that discusses these topics typically leans on emotional impact in order to be fulfilling to the viewer. Should the viewer lack personal experience with a similar circumstance to the plot of the film, they may find it difficult to relate, and as such, there is less of a fulcrum through which the film may move the viewer, thus possibly resulting in the film falling short.

With that stated, it almost has Horror feel to it, making each scene imbue the viewer with a sense of unease. The eerie music combines with the slow pace at the outset to make the viewer feel like they are viewing the film from thin ice. This sets up the later shots of supernatural indoor cold which serve as the highlight of the film. To more concrete aspects, A Late Thaw features both cinematography and cameras of good quality. The picture is clear and the camera is always showing the viewer what they are interested in seeing within a scene. This is important in a shorter format as it prevents viewers from becoming distracted from the focal point of scenes.

Aside from the cameras, the next most important feature of any film is, of course, its actors, and in this regard, Kim Barr does well. For the most part, the casting was believable. The rock climber man looks like a manly man that climbs mountains. The real estate agent looks like real estate agents one might meet, and deserves special mention for her performance. Fans of the somewhat recent Triple A cyberpunk release by Square Enix, Deus Ex, may recognize the voice of the main character’s confidant. She is played by Michelle Boback, who was also Adam Jensen’s girlfriend, Megan, in Deus Ex.

In general, the film does a good job of feeling realistic. The acting and writing is mostly believable. In this, one exception can be found, however. There is one scene where the main character is arguing with her sister or friend and some product of the writing, acting, or directing leads the scene to feel jarringly unrealistic towards the climax of the argument. The emotions feel both unreal and unwarranted. This scene is the exception to the rule for the most part however, and the rest of the film comes across smoothly. As the film progresses and emotions begin to bubble to the surface within the main character, viewers begin to see more supernatural scenes of snowing indoors. These shots are excellent and invoke a sense of importance onto the main character’s thoughts. Her struggle with her past can be seen in the solem walks she takes down the frosty corridors of her mind.

While the snow effects used are somewhat visibly fake, the camera work and the careful planning of scenes keeps the viewer from looking for long enough to notice anything wrong. Most of the scenes do not feature large quantities of the fake snow and instead favor the falling flurries which escape scrutiny much easier. The one scene where snow is piled on the dying ghost of the main character’s boyfriend looks a bit like bubble bath foam but the camera quickly cuts away to his face where makeup had clearly done a convincing job making him look like he was freezing to death.

A Late Thaw, as a whole, can be moving for someone who has lost a significant other and feels guilty moving on. This is no doubt a common emotion that requires aid in resolving, and A Late Thaw may well serve to help many people this way. To the average viewer, however, it may be difficult to find quite as much value in the film. The female lead has a life a bit too perfect to stir up sympathy in the typical viewer. The main character has lost one hunky boyfriend for a richer more hunky doctor boyfriend who wants to buy her a house. Both of which are somewhat distractingly more attractive than her. She is busy setting up her own rock climbing gym, or other unspecified business. Her life is perfect, aside from her hangup about letting go of her dead ex. This does serve to drive home the point that people should move on after a loss, but also feels like a point of alienation for those that do not find themselves relating from the outset. In addition, the female lead’s emotions are better shown through her actions in scenes than her face as her stares off camera do not convey a corporeal emotion.

All in all, A Late Thaw is worth watching. It is just fourteen minutes long and is interesting enough if time is available. The viewer may not have their entire mind warped across galaxies by the film if they do not have a prior connection with the subject matter, but that is not a good reason to ignore this piece. It is interesting, moving, and worth a watch, even if just to see a few cool shots and a nice house. CrypticRock gives A Late Thaw 3 out of 5 stars. 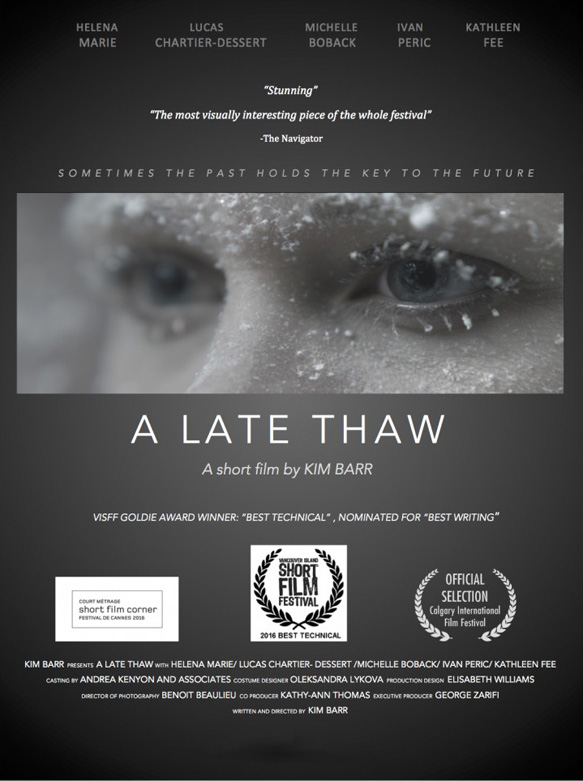 For more on A Late Thaw: www.alatethaw.com