A STORM OF LIGHT announce 2014 tour 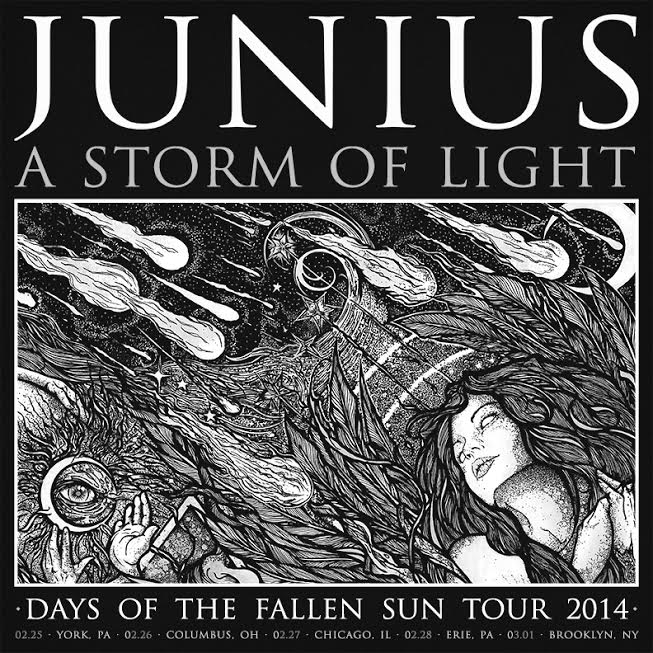 The sound manipulators of New York’s favorite metal alchemists, A STORM OF LIGHT, are very pleased to announce a long-anticipated run of live excursions beginning with a string of US shows next month. Slated to commence on February 25th in York, Pennsylvania, A STORM OF LIGHT will bring their foreboding soundscapes to Columbus, Chicago, Erie and Brooklyn alongside shoegaze metallers, Junius. Come April/May, the band will head overseas to storm Ukraine, Belarus, Russia and the UK in addition to stops at the illustrious Roadburn Festival in the Netherlands and Inferno Festival in Norway! Additional A STORM OF LIGHT live rituals, both stateside and abroad, will be disclosed in the weeks to come.

A STORM OF LIGHT will be touring in support of their critically-adored Nations To Flames full-length released last year via Southern Lord Recordings. Featuring Soundgarden’s Kim Thayil and Indian’s Will Lindsay on select tracks, A STORM OF LIGHT’s Nations to Flames centers itself on the apex of human failure and bears witness to the fall of all governments, all nations, and all religions. Called, “the strongest STORM album to date,” by Metal Injection and, “the soundtrack to our damnation,” in a near perfect review by About.com, who further boasts, “… A STORM OF LIGHT have an intensity that burns with the fire of creativity and artfulness while still relaying the message of how seriously doomed mankind is,” Nations to Flames finds the band at their creative apex both musically and conceptually.

In an 8.5/10 rating, Blabbermouth relays, “Reflective more of industrial and splatterpunk than the dirge modes that have characterized A STORM OF LIGHT’s more recent works, Nations to Flames is still joined at the hip by those core values of punched-up doom and explorative embellishments. We may be inevitably fucked as a world, but at least we have bands like this to give us fierce empathy straight to the bitter end.” Music Emissions shared the sentiment, “…dark themes of drowning, destruction and despair are perfectly suited to A STORM OF LIGHT’s impressively pressurized sound… the group’s haunting harmonic drone meshing guitar, vocals and subtle keyboard layers gives listeners a sense of slow suffocation in waves of noise rather than straightforward pummeling,” Exclaim crowned the record “their best release to date,” while Ghost Cult elaborates, “Neurosis and early Mastodon are the clearest reference points, but there are plenty of other influences that can be felt through; the sludge of Crowbar or The Melvins (‘Fall,’ ‘You Are The Hunted’), High On Fire’s relentless pummeling (‘The Fire Sermon’) and even Killing Joke’s industrial-tinged aggression (‘Dead Flags,’ ‘Omen’).”