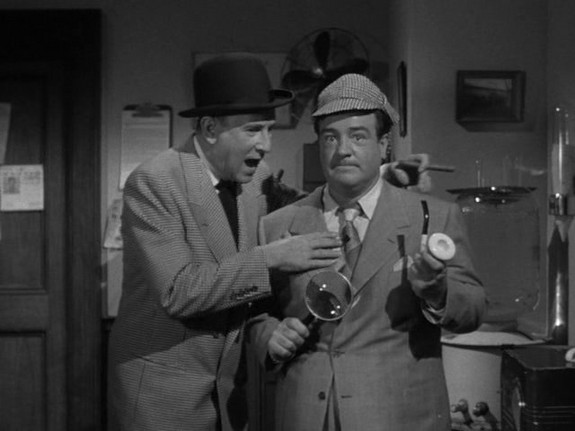 The story begins with Bud and Lou graduating, with Dugan Detective Diplomas in hand and big dreams. A man enters their new private eye office as Bud listens to a radio broadcast about a boxer accused of killing his agent. Lou recognizes the man in their office as the accused killer, but Bud ignores his partner. They take their new client, Tommy Nelson (Arthur Franz: Sands of Iwo Jima 1949, Invaders From Mars 1953), to his fiancé Helen Gray (Nancy Guild: Black Magic 1949, Little Egypt 1951), and Uncle, Phil Gray (Gavin Muir: The House of Fear 1949, The Miracle 1959). Uncle Phil inherited an invisibility serum from famed John Griffin, the originator who went insane as a result of invisibility. When Police detective Roberts (William Frawley: I Love Lucy TV series, My Three Sons TV series) showed up to investigate, Tommy self-injects the invisibility serum. Child-like Lou witnesses Tommy’s transformation, but nobody believes his report.

Lou and Bud help clear Tommy’s name by exposing underworld connections and fight-throwing. Lou is to fight boxing champ Rocky Hanlon (John Daheim as John Day: The Lone Ranger TV series, The Virginian TV series) with the help of an invisible Tommy. The beautiful seductress Boots Marsden (Adele Jergens: Edge of Doom 1950, Day the World Ended 1955) offers cash if Lou will throw the fight. She works for Morgan (Sheldon Leonard, It’s a Wonderful Life 1946, Make Room For Daddy TV series), a thug whose organization makes money from dirty matches. Morgan had approached Tommy with a similar offer, but Tommy refused. When he won the match up with Rocky Hanlon, Tommy was framed for the murder of his manager, starting his flight from the law. 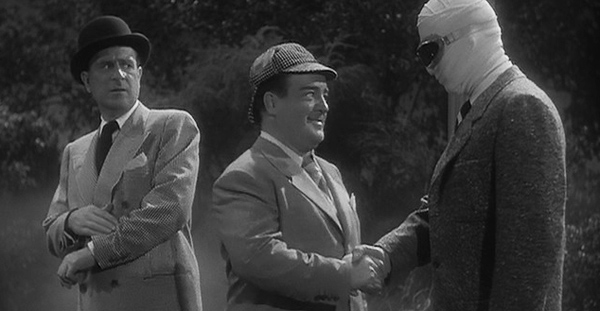 Many gags had their origination with the Comedy duo of Bud Abbott and Lou Costello. Their timing and word play are legendary, and their sight gags worked well in The Invisible Man. A scene in a restaurant features Lou covering for a hungry and unmannerly invisible Tommy, culminating in a spaghetti-eating scene reminiscent of Disney’s animated classic Lady and the Tramp. Jokes like Lou licking his magnifying glass like it were a lollipop and his hat flying from his head when he is surprised appear almost cartoon-like. In the bar, Tommy drinks to aggressive drunkenness, picking fights until he’s knocked out. Bud and Lou pantomime, lifting and carrying him out. Tommy’s disembodied voice causes the duo trouble throughout the film.

However, when Lou and the invisible Tommy enter the boxing ring with the camp, hilarity ensues. A favorite point involved Lou. He had sprayed Tommy with perfume to alert him of Tommy’s whereabouts. When Tommy left the ring to spy on Morgan, the champ pounded Lou. Lou sniffed the air like a bloodhound, searching for Tommy’s perfume. The referee asked what he was doing. “Smelling,” the referee pursed his lips and said, “It’s poor English, but you sure do.” At one point, Lou inadvertently knocks the invisible Tommy out. He and the champ, Rocky, trip over Tommy’s prone, invisible body.

Howard Christie served as producer, and Bud Westmore headed the makeup department, and for its time, the special effects were quite impressive. Filmed in black and white, Director Charles LaMont borrowed some footage, including the administration of invisibility serum to a guinea pig, from the original Horror film. An outline of the invisible man becomes apparent in steam or fog, and when Uncle Phil administers the antidote, veins and a skeleton form before revealing the actor. As a nod to the original Horror flick, part of the set includes a framed photo of Claude Rains from his 1933 role as Dr. Griffin, the original Invisible Man. 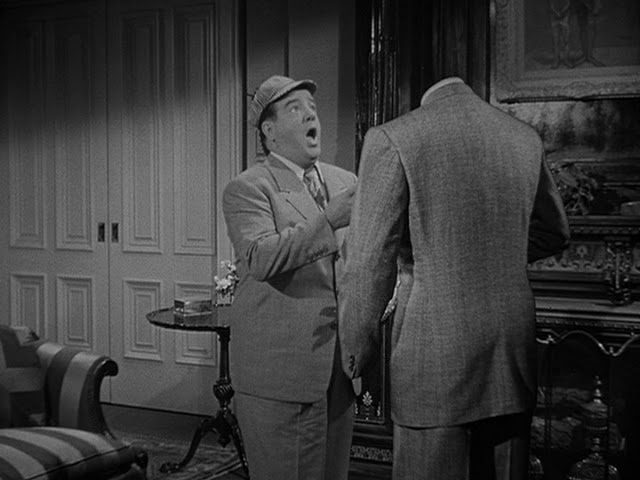 Furthermore, the cartoon opening and the inexplicably silly ending serve as hallmarks of the times. Arthur Franz plays Tommy Nelson with a serious, menacing air, which provides a wonderful foil for the comedic duo. Lou remains a bumbling, cowardly, sweet-hearted clown, and Bud portrays a potentially shady intelligence. The easy interactions between the key actors explains why Abbott and Costello were the highest paid Comedy team during World War II. Speaking of which, proceeds from the film’s premiere benefited the LA Examiner’s Fund for Wounded Vets.

As stated, the film was part of a series that was quite successful for Universal, pairing up some of their famous monsters with Abbott and Costello to great comedic effect. To this day, the film is still adored by fans young and old. Although Abbott and Costello Meet the Invisible Man is more of comedic interpretation of a boxing or mob movie than of a Horror flick, the film retains its appeal after all these years and thus will be a charming classic for many years to come. 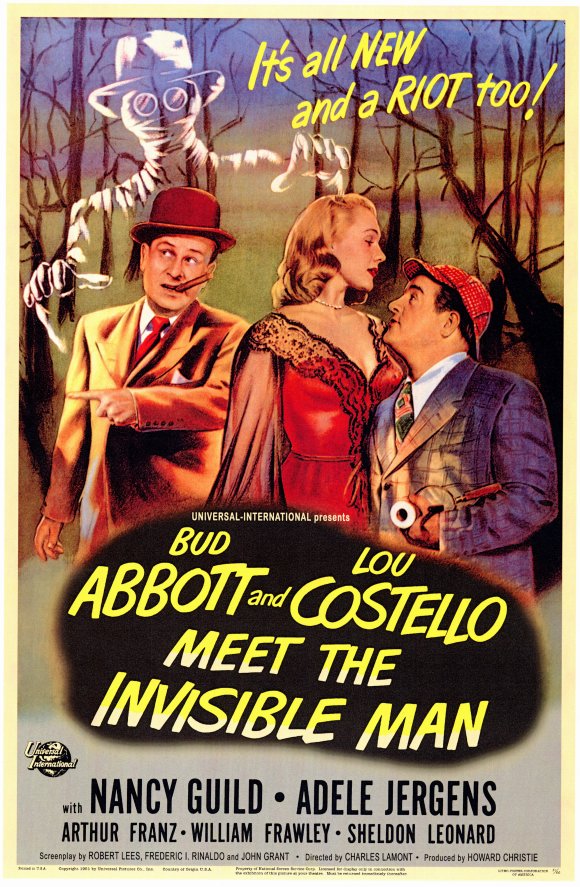 Purchase Abbott and Costello Meet the Invisible Man on Amazon