As far as well-rounded, virtually untouchable, and exceptionally skilled classic Heavy Metal bands go, no one even compares with Germany’s Accept. With roots that date back to the late ’60s, the question raised is how does one even begin to discuss Accept without mentioning original Vocalist Udo Dirkschneider? The correct answer is, it is seemingly impossible, yet the band’s current Vocalist Mark Tornillo does a fantastic job keeping Accept alive and strong all these years later.

Touring regularly, Accept released the killer studio album Blind Rage back in 2014 to much praise. Touring some more, in honor of that very album, Accept are back in 2017 with a live rendition, called Restless And Live. Released back on January 13th via Nuclear Blast, the package includes a DVD of their performance at Bang Your Head! Festival in 2015, and also contains two live CD’s with twenty-seven songs taken from their last European tour.

As this band has changed lineups numerous times over the 40 plus years they have been in existence, a couple of the originals still remain, with the current group of Metal martyrs including Wolf Hoffmann on guitars/backing vocals, Peter Baltes on bass/backing vocals, Mark Tornillo on lead vocals since 2009, Uwe Lulis on guitars, and Christopher Williams on drums. While some may naysay lineup changes, the current cast of Accept is as solid as ever and Tornillo’s voice has all the necessary qualities Udo pushed into his own. Although, Tornillo is perhaps slightly more gentle in his delivery, which is not a bad aspect and helps define and differentiate the two.

In regards to the music, The Restless And Live features all the greatest hits from all eras starting off with “Stampede” from the latest album and then jumping backwards through time into a couple key songs from 2012’s Stalingrad. There are so many significant and well-crafted songs amidst the live collection that withstand the test of time, and many have become staple anthems such as “Pandemic,” “Metal Heart,” and “Balls To The Wall” to name a few.

Then there is “London Leatherboys,” a classic off the 1983 album Balls To The Wall, which contains all the characteristics fans have come to know and love with old school Heavy Metal guitar riffs, creative backing vocals, and the rough cut stylings. Travelling to another anthem style tune, “From The Ashes We Rise” possesses a straightforward, almost frontier vibe before they jump into “Losers And Winners,” one of the most fun-filled, speedier tunes on the album. Furthermore, the live rendition of song “No Shelter” has a funkier vibe to the riffage and is a good change of pace.

The whole album flows smoothly and the live action of course gives the pizzazz to the straightforward. As mentioned earlier, “Pandemic” leaves no stone unturned and races into possibly the most well structured song of them all. Then there is “Son Of A Bitch,” which is unmistakably Accept at its finest and toughest hour and calls out life for what it is. Not to be overlooked, a more somber and emotional tune is mixed in with “The Curse,” possessing the power to leave the audience in a trance. Onto “Bulletproof,” they carry an AC/DC vibe in a much more bluesy craft, as with the last five songs on disc two beginning with “Fall Of The Empire” and ending with “Balls To The Wall.” Second to none, all the songs are full of talent, intelligent emotion, and are no doubt extremely timeless.

As a live entity, what is unique about this band is there are almost two versions performing simultaneously as Udo is currently touring and playing all Accept songs while this other newer modern day Accept is playing the old and the new as well. It does not seem to bother either party and though some fans may choose to appreciate one more than the other it would be a pity for someone not to accept both, as both are equally Accept.

Through and through, there is just no denying the guitar and its superiority to so many inferior counterparts and competitors. Accept will always be a legendary band that paved the way for so many to come after in the genres of Thrash, Speed, and classic Heavy Metal. Without further actualization, CrypticRock gives Relentless And Live 5 out of 5 stars. 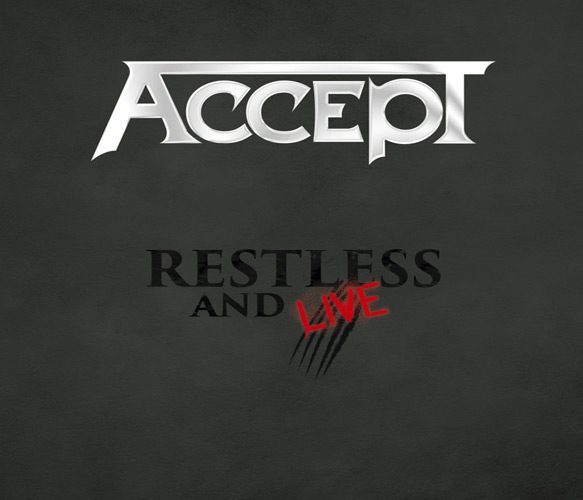