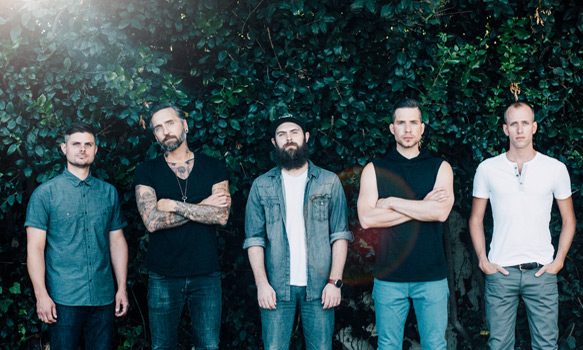 Tennessee Williams once wrote, “I didn’t go to the moon I went much further, for time is the longest distance between two places.” For the members of Seattle Rock quintet Acceptance, it took a decade long hiatus of growth and life experiences to get to a place where the band could return with their triumphant sophomore album, Colliding by Design. After establishing a foundation with 2005’s Phantoms, the band’s maturity is evident predominantly in their lyrical content, which trades angst and heartbreak for contemplation.

There is a definitive sonic shift in Colliding by Design as if a calm and confidence now steer the way, but what remains are the pure, captivating and perfectly-pitched vocals of Jason Vena, combined with masterfully complementary melodies that make each track catchy and infectious. An underlying hint of  the ‘80s trickles through the soundscape with the addition of synths and melodic choices though it never feels forced.

Opening track, “Diagram of a Simple Man,” encompasses every element one would want from an Acceptance song without sounding like a regurgitation of previous work.  Soaring guitar riffs, enveloping percussion and dynamic vocals combine to create an anthemic atmosphere, while Vena utters an incredibly relatable sentiment, “We live in black and white/ We dream in color.” It is this theme of self-examination within the song layered with a vastness in the sound that makes the song memorable.

Title track, “Colliding by Design,” introduces an ‘80s undertone with both the guitar work and use of electronic elements. It is extremely catchy, with Vena’s emotionally-charged vocals shining through as he croons, “Let’s kiss before you go away / Two burning stars chasing the day / There’s a look in your eye, you want to stay / So let’s kiss before you go away.”  Those ‘80s characteristics continue on “We Can Escape,” a track that easily bewitches, allowing the listener to get lost in Vena’s ethereal vocals against the backdrop of driving percussion and layered harmonies.

Pat Benatar knew how to deliver a rousing power anthem and it seems as though Acceptance has incorporated some of that ‘80s magic into “Come Closer.” It is a tightly constructed track with a guitar solo leading into the bridge that would be an opportune time to whip out some ‘80s dance moves. While evoking a nostalgic quality, it never fails to feel contemporary. The simplicity of “Goodbye” reinforces the band’s ability to produce catchy hooks and infectious melodies that can immediately result in a foot-tapping, head-bopping sing-along.

Then “73” proves that a Pop song done well can be impactful. Beginning simply with Vena’s vocals accompanied by the atmospheric sound of synths, Vena sings, “There’s nothing to lose but you’re still losing / Nothing to give but you’re still giving back.” The song progresses into a soaring chorus as Vena declares, “I’m still here.” It is the type of song that could easily be heard in a coming-of-age film at that vital moment of self-discovery.

Acceptance delivers a more Pop-heavy sound on Colliding by Design, though “Fire and Rain” falls nicely into a straightforward Pop-Rock sound. It erupts melodically with thoughtful lyrics as Vena sings, “Will you cover your heart when you’ve seen what I’ve done? / Will you look in my eyes and stare at the sun?” While “Fire and Rain” contains a more explosive quality, “Sunset” begins with a sultrier and sexy tone. It is one of the stronger tracks, delivering a blazing guitar riff against Vena’s hypnotic vocals.  Next up is the rhythmically charged, “Haunted,” which showcases the band’s Pop sensibilities. The strength in chorus construction is the group’s sweet spot and is also apparent here, with that euphonious aspect that is consistent in each track. The atmospheric vibe of “When I Was Cursed” sets a slightly darker mood as Vena laments, “Where did I go? / With fear in my hand and a chill in my soul/ Lost, now I can see/ The danger of love, she’s all I need.”

The album closes with “Golden,” which seems fitting as lyrics like, “We grow old and move on” mirror the journey of the band; with respect to their time of evolution – as human beings and artists during their hiatus – and the unlikeliness of their reunion.  Now older and wiser, Acceptance’s reunion came to fruition and their maturity has propelled the band forward.

Twelve years is a long time between album releases, especially when it is not intentional.  With such a gap in timing, it seems that it would be even more difficult not to fall into the sophomore slump; though this long break has clearly allowed Acceptance to avoid the pitfalls many bands face. The excitement to be working together again can be felt on Colliding by Design.  As the band’s sound continues to evolve, one thing that remains is their ability to connect with their audience through heartfelt lyrics and magnetic melodies. For these reasons, CrypticRock gives Colliding by Design 4 out of 5 stars. 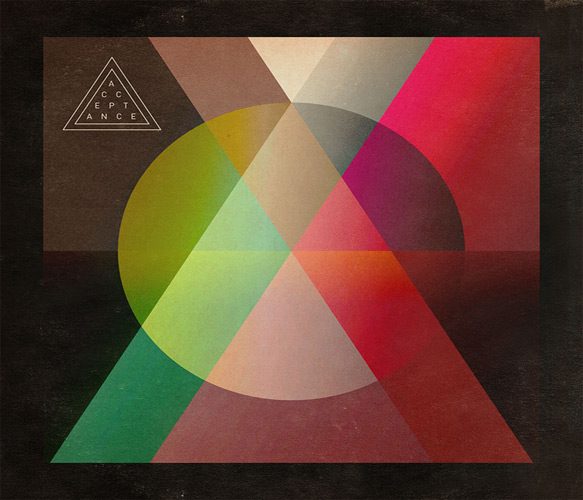