The raspy, highly unique vocals of Udo Dirkschneider and hard, heavy guitar solos of Wolf Hoffmann helped German band Accept’s sound pave the way for Heavy Metal. Following a series of early projects, the lineup of Accept took form in 1976 with Dirkschneider, Hoffmann, Guitarist Gerhard Wahl, Bassist Peter Baltes, and Drummer Frank Friedrich. With Wahl soon departing, Jörg Fischer took over second guitar as the band played in clubs and small festivals. Building themselves some notoriety brought them an invitation to play one of the first ever Rock-n-Roll festivals in Germany, Rock am Rhein. Soon after their appearance, they were offered a recording deal, and in January 1979, they released their first self-titled studio album. The album did not have the commercial success Accept had hoped for, but it did open the doors for them to tour other nearby countries such as France and Belgium.

In late 1979, the band would head back into the studio with new Drummer Stefan Kaufmann to record their next album, I’m A Rebel, which was released in June the following year. The album’s approach had more of a commercial sound to it and it gained enough momentum to be distributed internationally including the United States and the United Kingdom, but it seemed as if the band was still trying to find the right sound that would fit them. Returning to the Delta Studios in Wilster, Germany with fresh ideas of their own, over the cold Winter months of December 1980 through January 1981, they would forge the songs that would make up Breaker. Released on March 16, 1981, this classic album was one of the ones to pave the way for the band as it was Accept’s groundbreaker in terms of them finding their sound, the sound that would take them to full notoriety with their follow up albums. This album also got the attention of the Heavy Metal fans enough to get them a spot opening up for Judas Priest on part of their World Wide Blitz tour in 1981. This would be the first time that the band would get to play outside of Europe.

Breaker has ten songs on the album that were all written and composed by Dirkschneider, Hoffmann, Fischer, Baltes, and Kaufmann. The first song to start it off is “Starlight.” The song literally winds its way up to full blast, then Dirkschneider rips in with his Heavy Metal rasp. It is a fast and furious song with strong dueling guitars soloing frantically away. Next up is the title track, “Breaker.” It is the shortest song on the album, but with an even faster pace than the first song. This song easily defines Accept’s role in the Speed Metal genre.

“Run If You Can” has a repetitive energy to it. Dirkschneider digs to deep places to deliver the lyrics. With serious dueling guitars mid way through the song, it find its way back to that repetitive rhythm, as it is backed by strong double base throughout. Then comes a tame moment in the album as, the longest running song on this album, “Can’t Stand the Night” is a ballad. But ending side one is the high energy and aggressive “Son of a Bitch.” The title of the song speaks to its explicit lyrics and has Dirkschneider yelling and growling angrily at times throughout the song.

Turning the album over to side two, it starts with the cheering of an audience. Soon, “Burning” kicks in with strumming guitars floating over the heavy beat that carries the song the rest of the way through. Rocking more than Heavy Metal, the next song, “Feelings,” has deep, thick drums and bass to hold the song on the ground while Dirkschneider belts out his vocals. Next is the song on the record that has the most commercial feel, “Midnight Highway.” It is a fast, fun party song, but still rocks hard and treats fans to a nice dueling guitar solo towards the end of it. This is also the first track to feature Baltes on vocals during the bridge of the song.

The following song has Baltes doing all the vocals on it. “Breaking Up Again” is an acoustic ballad, a classic song in this time period for a Heavy Metal band. Though mostly acoustic, with painful lyrics, the drums and electric guitars kick in with a very mellow guitar solo in the midway part of the song. It serves the listener up with beautiful guitar playing along with perfect drums and bass to accompany them. Kicking it back up to full gear is the final track on the album, “Down and Out.” Starting off with heavy-hitting drums, Dirkschneider takes over and this album ends on a high, Heavy Metal rampage, complete with classic screaming guitar solos by Hoffmann and Fischer.

The album’s cover art depicts a young woman who looks like she is ready to step into a Discotheque, but is somehow subjected to the Heavy Metal sound of Accept’s new album. She is seen open-mouthed, with barbed wire piercing through her head via her ears.

Accept’s following album really shined. With the release of Balls To The Wall in 1983, it catapulted them to new heights; not only in sound, but in commercial success as well. The band’s momentum continued strong through the mid eighties. Then, in 1987, Dirkschneider decided to embark on a solo career with the full support of his bandmates. There have been many line up changes over the years, and some band mates would return and depart again, but Accept is still going strong all these years later. The current line up consists of two original members,Wolf Hoffmann (guitars) and Peter Baltes (bass/vocals), joined by Mark Tornillo (vocals) since 2009, and two newer members joining them in 2015, Uwe Lulis (Guitars) and Christopher Williams (Drums). They released their fourteenth, hard and heavy rocking album, Blind Rage, in August 2014 and they are currently touring in the Brazilian region in 2016. With that said, Breaker still remains to be an adored piece of Metal history by Accept fans thirty years later. 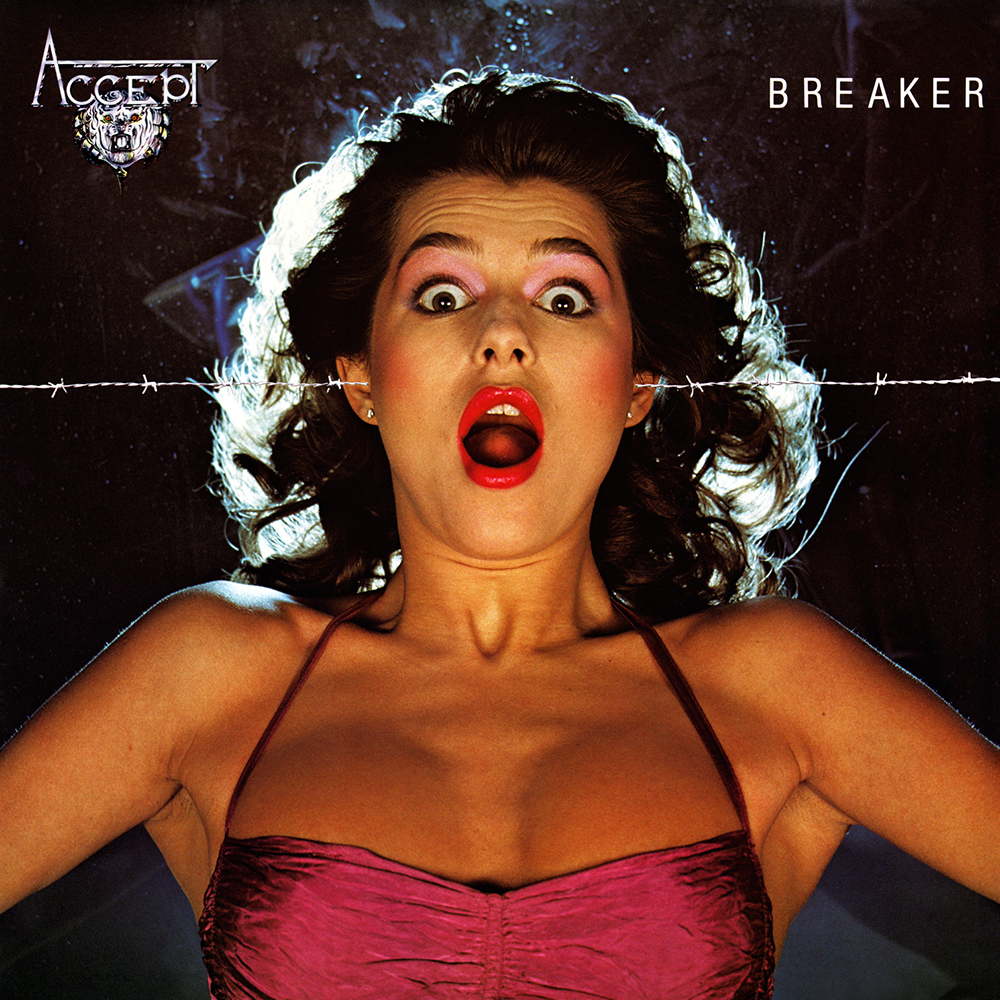