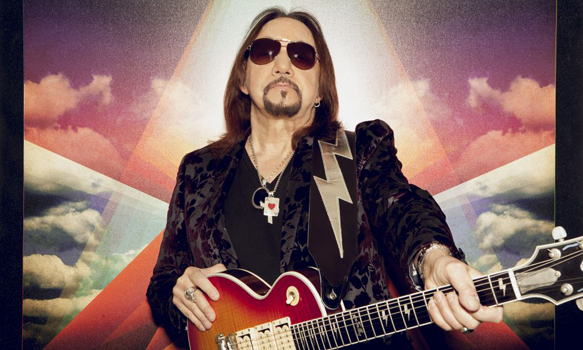 One of Rock-n-Roll’s biggest influences to date, Ace Frehley, has paved the way for all guitarists near and far. His journey dates back to younger years as a teen, where music practically saved his life, rewarding him a shining future. Frehley’s plans of Rock stardom became vivid after attending a Mitch Ryder show, opened by The Who and Creamer; a critical moment that would shift his life as he knew it. Only focusing on himself thereafter, the number one goal was to improve his already paramount guitar skills -aided by some of Rock’s finest – Townshend, Page, Clapton, and Hendrix – and to find a group willing to dive into music alongside him. Without knowing it would lead to ultimate triumph, Frehley’s life changed at the end of 1972, the moment he read a local notice advertising for a lead guitarist wanted, signed by Paul; guiding him to a band led by pure drive and Rock-n-Roll. With no time wasted, nerve-wracking auditions were made, and two weeks later Ace Frehley became the lead guitarist and a primary writer of a little band called KISS.

As one thing led to the other, Frehley’s life soon became a whirlwind of Rock n Roll. For years of writing, recording, playing shows, and creating a prominent image, dedication surely paid off. Helping create their logo, while writing some of their most well-known and loved songs, such as “Cold Gin” and “Parasite,” alongside traveling every inch of the country. Thanks to Frehley, KISS exploded, becoming one of the most important bands in Rock history. Although constantly writing, Frehley shied away from the microphone one too many times, finally taking the spotlight with “Shock Me,” from their 1978’s Love Gun. Soon after, Frehley found himself more open-minded with the idea of singing; before he knew it, he abandoned KISS to focus on himself and a solo project entitled Frehley’s Comet. A couple albums and tours later, Frehley wandered back to KISS, stayed long enough for a reunion tour and album (Psycho Circus), only to leave again in 2000, but for good this time.

Conquering himself and his demons, Frehley took a long break that would eventually leave him back out on top. With his second self-titled and produced solo project, Frehley has released two successful albums, entitled Anomaly (2009) and Space Invader (2014), while also playing a multitude of shows; but nothing amounts to the influences that got him there. Now with his third full length album, Origins Vol. 1, out April 15th via eOne Entertainment, Frehley pays tribute to some of Rock’s most affluential. Featuring some of his own work, and guest vocalists, the album highlights successes such as The Rolling Stones, Jimi Hendrix, and even The Kinks.

Origins Vol.1 blasts off with Frehley’s execution of Cream’s “White Room.” With a touch more of angst, Frehley stays close to all original performances, with an exception towards the ending. Frehley puts an exclamation and signature on a protruding guitar solo, leaving listeners speechless; but only wanting to dive deeper into the album. Next up, The Rolling Stones’ “Street Fighting Man,” originally a lighter and soft-sounding tune, now made heavier with its pounding drums beats and distorted guitars, completely transforming it into a Classic Hard Rock twist.

Jimi Hendrix’s “Spanish Castle Magic,” now with more pronounced and enhanced instrumentation, was a staple to most of their live shows. Making it his own, Frehley recreates this beloved tune, while giving recognition to the prized American Rock guitarist himself, featuring Rob Zombie’s shredding master John 5. Covering Free’s “Fire And Water,” Frehley asks for the help of friend and former bandmate Paul Stanley of KISS. Jumping at the opportunity, the two paired up to re-innovate the minds behind Free, concluding with a bold and cleverly produced statement.

Off of their album Jailbreak in 1976, Thin Lizzy’s “Emerald” has clearly made a dent in Frehley’s career. Featuring Guns N’ Roses’ Slash, this rendition shines light on the wide variety of talent through all artists. This track is beautifully mastered, confirming the rumors of the album’s eminence. Straying away from its original components, Frehley took Led Zeppelin’s “Bring It On Home” and made it his own. Using the primary guitars and percussion, he turned this classic into a Hard Rock tour de force.

Showcasing the work of The Troggs, “Wild Thing” is nothing but extraordinary. Highlighting guest vocals by the talented Lita Ford, this track is packed with lush harmonies and lives up to the hype of its original. Covering one of his own, Frehley jumps back into KISS history with “Parasite,” including another appearance by John 5. Sticking fairly close to its origin, the song is richly textured and gives insight to Frehley’s interpretation of the track throughout the years. Keeping the fun, upbeat tempo, Steppenwolf’s “Magic Carpet Ride” is certainly one hell of a ride. From start to finish, the track is a wholly unique venture, keeping listeners intrigued. Another one from Frehley’s past, “Cold Gin,” a song all about booze, can be found on the 1974 self-titled KISS record. A lot heavier than its original, this track is a work of instrumental genius.

Next up on Origins Vol. 1,  taking a spin on a classic, “Till The End Of The Night,” by The Kinks, is converted to a brilliant, complex Ace Frehley signature. Of course ending the album with another KISS tune, Frehley takes back “Rock n’ Roll Hell,” and truly claims it as his own. Defining the lyrics with his strong vocals, and not to mention the catchy orchestration to back him up, this song is otherworldly, taking listeners to Rock-n-Roll paradise.

Adding to this list of most out of this world rockers, Ace Frehley has surely outdone himself with his stunning rendition of all songs rooted to Rock-n-Roll. Whether a diehard KISS fan, or just looking for some classic Rock jams, there truly is a song for everybody. As anticipation grows for VOL. 2, this album is one that can be replayed and enjoyed often, taking all listeners into a blast from the past. CrypticRock gives Ace Frehley’s Origins Vol. 1, 5 out of 5 stars. 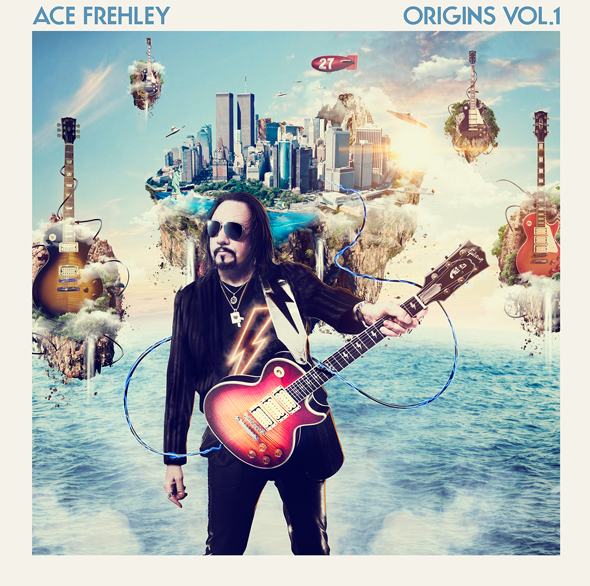