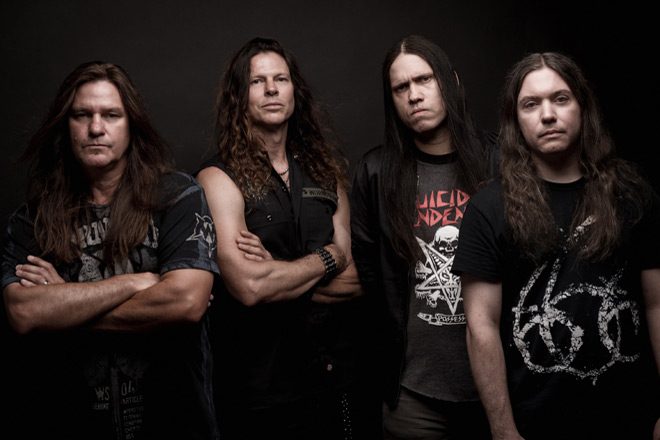 Out of the ashes of every Megadeth band break up came many a great bands with key members such as the late great Drummer Nick Menza as well as Guitarists Chris Poland and Marty Friedman just to name a few. Most recently departing at the same time from Megadeth in 2014 marked the arrival of Lead Guitarist Chris Broderick and Drummer Shawn Drover closing one chapter in their life to begin a new one in the form of Act Of Defiance.

Completing their mission, they brought on Henry Derek for vocals and Matt Bachand on bass. Valuable pieces to the puzzle, both brought a darker, heavier vibe to the music that was already taking on a Melodic Death Metal stray from the Thrash riffs and beats of Megadeth. That in mind, the catch twenty-two of the jump from famed group to unpopular new supergroup is that not all fans of the famed group will catch on because some people are simply afraid of change and of trying new music. While these people are left behind to wallow in their own demise, the rest are excited to see what the mind of brilliant Broderick has to offer the world of his own making.

Now two years after 2015’s debut album, Birth and the Burial, Act of Defiance are set to return with their new album, Old Scars, New Wounds, on Friday, September 29, 2017 via Metal Blade Records. Eleven tracks of art filled to the brim with more pounding and melodic riffs than ever before, it kicks off with the speedy “M.I.A.” A grand opening, Derek shows off his clean to scream vocal capabilities in an honorable fashion while the melodic riffs pour in midway through. Although it is not a far stretch from some of the stylings in Megadeth, it is an entity all its own.

Usually this kind of Melodic Death Metal is interspersed with Hardcore or Metalcore, but in this case it mixes with extra speedy Thrash for a new twist. The vocals are simply put just as they should be without at all whine. A touch faster, the drumming on “Molten Core” stands out for its eclectic attitude and racing rhythm. Then “Overexposure” has a pace which turns more toward melodic Thrash n’ Death with the clean to harsh vocals mixed with the intricate solo work.

Variety is the spice of life for Act of Defiance and this album comes across as a collective work with a running theme. That theme is technological versus natural life gone AWOL with the maddening trials and trifles that conflict as well as confuse the average human into an unnecessary struggle with an unintelligible, intangible source. This is while reality actually shows a mirror to the soul. Painting this picture, the slightly anthem style song of the bunch is “Lullaby Of Vengeance,” sparking a mosh pit of the mind with its harsh drumming and vocals, making it a good selection for a live show at a climactic moment. Again, some gorgeous riffs are resting at the outer lobes of listener’s ear ready to be devoured into a dark mesmerizing abyss.

Later on, “Reborn” is a solid angst number with a hint of the Megadeth flavor but mixed with more of Broderick and Drover’s sculptural, thick, layered playing. This is while Derek’s voice carries the message in a heavy and gratifying way. Skipping on to “Another Killing Spree,” the heaviness continues and the catchy rhythm travels throughout in a fun yet begrudging way. Then, as the end draws near, “Broken Dialect” runs off the map with solos and creative drumming mixed with power packed lyrics matched with graveled vocals. It is beauty to the core and a favorite for the album that crosses emotion well. Closing the tale is the hopeful battle storm of “Rise Of Rebellion,” which resonates as if it were a sword penetrating a gut on a gored summer day and it serves as a nice extra punch in the face.

As far as the prospective of hearing Old Scars, New Wounds in a live setting is concerned, the excitement ensues because the one missing link upon listening at home is the visual energy of the band. Broderick alone has a powerful stage presence, but all other members rank at the top in visual stage energy as well. For a band that has been around three years, they are sailing into the recognition they deserve. However, the reputation of all members involved coming from well-known bands such as Shadows Fall, Megadeth, and Scar The Martyr enables Act of Defiance to be classified as a supergroup, but sadly the have been slighted on affection and attention they deserve. That said, for anyone unaware of this talented group of responsible hooligans, they are absolutely worth an effort of a live viewing and an album purchase because the skill, talent, and unique genre twist is right in line with the latest in trendsetting Heavy Metal in late 2017.

Overall, Act Of Defiance’s Old Scars, New Wounds is even more powerful than Birth and the Burial. It definitely speaks from the heart with a beam of dark directional energy that satisfies the needs of those it crosses paths with. For this achievement, CrypticRock gives this album a 4 out of 5 stars. 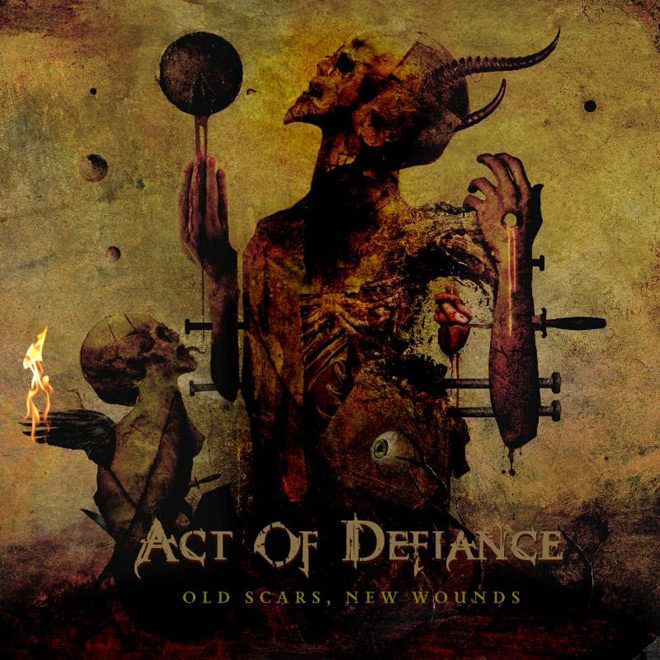