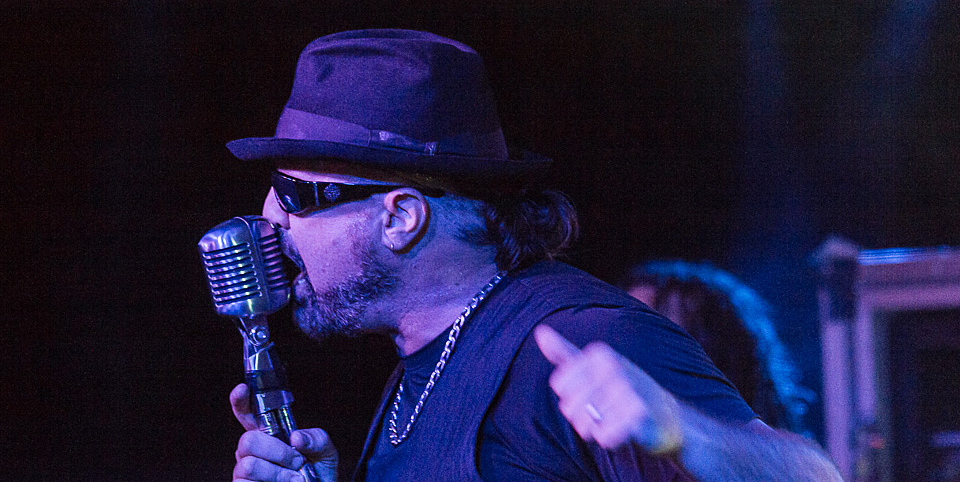 After being in a near fatal van crash in May, Adrenaline Mob were regrettably forced to cancel the remainder of their tour with Avenged Sevenfold and Hellyeah.  Given time to heal up, the band proved nothing can slow them down as they hit the road in May to perform live again.  Releasing their sophomore album Men of Honor in February, there is still plenty of rocking to be done, and that is exactly what this band is determined to do.  Featuring new drummer A.J. Pero (Twisted Sister), the old guard of vocalist Russell Allen (Symphony X), guitarist Mike Orlando, and bassist John Moyer (Disturbed) solidify that the Mob is back!  Returning to Long Island, NY on Friday June 6th, Adrenaline Mob began their evening at Grand Slam Collectibles in West Islip for a special acoustic performance before heading over to Amityville to rev up the volume in front of a packed Revolution Music Hall.

Warming up the evening earlier, as the crowd rolled in, were Long Island’s The Hard Way, Plague Legion, and Toxic Shock.  All bands provided a hard hitting brand of thrash and groove metal and they did a great job of getting the energy flowing in Revolution Music Hall.  Each band brought with them a dedicated local following and showed that Long Island still has a strong metal scene.

Next up were Brooklyn, NY rockers Black Water Rising.  Making regular appearances at Revolution Music Hall, the band continues to grow their fan base each time out.  Led by former Dust To Dust vocalist Rob Traynor, along with former Boiler Room member Mike Meselsohn (drums), Oddie Mclaughlin (bass), and newest member Dennis Kimak (guitar); Black Water Rising keep their sound tight, raw, and in your face.  Performing a stellar set of tracks from their two albums including the single “Brother Go On” and groovy “Dance With The Devil” their brand of rock spoke strongly to the senses of this crowd.  Their newest video for “Dance With The Devil” is out now and features chicks, boozes, and cars; so rock fans check it out now.

Clearly a show many have been waiting for, people could be found wall to wall throughout Revolution. Spreading out into the courtyard in the rear with drinks in hand, this audience was ready to let off some steam after a long week at work.  With rock station WBAB on hand, after an intermission, local legendary rock jockey Fingers hopped on stage and enthusiastically introduced Adrenaline Mob.  Allen walked out with the rest of the band, beer in hand, and greeted everyone with an eye opener of “Mob is Back”.  Orlando and Moyer ripped on guitar and bass while Allen’s voice soared.  Keeping the new music flowing was “Let It Go”, “Dearly Departed”, “Men of Honor”, and the passionate “Fallin’ to Pieces”.

With the audience raising their glasses in appreciation, the band kept rolling, going into fan favorite “Indifferent”.  That was when Pero was given a chance to shine behind the drum kit.  Usually a drum solo breaks up the momentum of a show, but this was not the case as Pero blistered on the skins, putting on a clinic not seen since the heyday of Twisted Sister.  Roars came from the crowd and the energy kept flowing with “Hit the Wall”, “Come on Get Up”, “Judgment Day”, and “Feel the Adrenaline”.  The performance of Allen was steady and inspiring as he showed gruffness while remaining smooth.

After a gracious goodnight, the band left for a brief moment only to return for an epic encore of “Undaunted” and their amazing cover of Black Sabbath’s “Mob Rules”.  Adrenaline Mob’s performance was tight, energetic, and the perfect start to the weekend for this Long Island crowd.  This is a world class rock-n-roll band everyone needs to catch live.

Read the review of Adrenaline Mob’s Men of Honor on CrypticRock here.