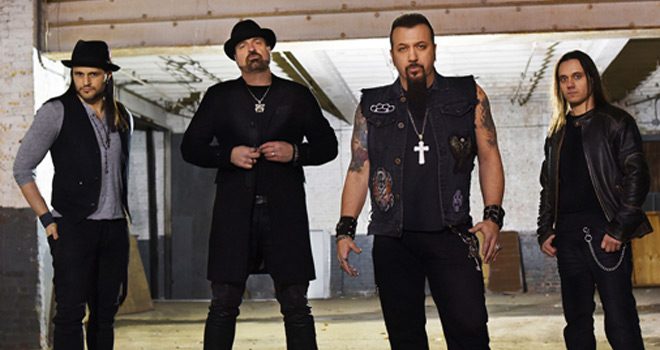 In a country that is supposedly built by the people, for the people, nothing is ever quite so easy and absolutely nothing is free in the United States of America. Many individuals know the tragedies of life all too well and the gents in Adrenaline Mob are amongst those acquainted with the darkness. That in mind, the hard rockers returned on June 2nd with We the People via Century Media Records.

When you are a Hard Rock supergroup like Adrenaline Mob – the brainchild of Russell Allen (Symphony X, Trans-Siberian Orchestra), exceptional Guitarist Mike Orlando, and Drummer Mike Portnoy of Dream Theater fame – you do not have to mess around with pesky little details. Instead, you can immediately launch yourself out into the world, just as the band did with their debut album, 2012’s Omertá. The album would go on to peak at No. 1 on the Metal Albums Chart on iTunes, No. 5 on Billboard’s Rock Albums Chart, win the band iTunes UK Metal Album of the Year; and the band would go on to share stages with everyone from Godsmack to Avenged Sevenfold.

Following these successes, the band would release their sophomore effort, 2015’s Men of Honor, but tragedy was looming in the wings. While on tour with Drowning Pool – no strangers to tragedy themselves – Adrenaline Mob’s long-time friend and current drummer, Twisted Sister’s A.J. Pero, would have a heart attack and pass away unexpectedly. Much as any family member would do, his bandmates took the time to grieve for their loss. “When A.J. passed away, everything kind of ground to a halt,” Vocalist Allen explained. “We weren’t sure where we were going to go; we didn’t know what was going to happen. We had been at it for a while and had faced so many adversities, we didn’t know how to continue at that point. Adrenaline Mob was in a dark place. So we put some needed time between us and the band to get away from it. When we started talking again, we had long discussions about our expectations for Adrenaline Mob; we took it step by step. From there, the process started.”

That process has given birth to the band’s third and newest studio offering, We the People, with a new lineup cemented, Adrenaline Mob – Vocalist Allen, Guitarist Orlando, Bassist David Zablidowsky, and Drummer Jordan Cannata – are ready to launch themselves into their triumphant return.

We the People, as its title would suggest, is a quasi-political disc. Allen explains further: “The album title is a reflection of our times. The songs have certain, particular stories that stand on their own. Many of them are also driven by the climate we live in today and some are about having a good time, being free and loving Rock-n-Roll. All the tracks have a personality and character to them.” That being said, Adrenaline Mob are careful not to conform to typical partisanship: “I have my political views but they’re not here,” Orlando clarifies. “As songwriters, myself and Russell try to not take sides; we want to write about what’s going on. There are a few tracks that tell a story of today’s climate, it’s our take on it. The title, We the People, is evidence of that . . . Really, we’re not out to alienate people; music is supposed to bring people together. That’s what Adrenaline Mob is about. And, I think, We the People is the best Adrenaline Mob we have done so far.”

The album blasts off with “King of the Ring,” where Allen’s raspy vocals demand “I will make you crawl!” through pulsing sonics full of blistering, racing guitar work; the overall vibe is that of classic Heavy Metal assaults mating sensuously with today’s melodic Hard Rock attack. The quasi-political title track, “We the People,” pays musical homage to the 1980s as Allen sings of a country where there is simply no way to win and for this, we will all fall. Frenetic, throbbing bass warns us that there is nowhere to hide when “The Killer’s Inside,” before the band move to the palate-cleansing “Bleeding Hands,” one of the album’s calmer offerings.

Superb stand-out “Chasing Dragons” launches Adrenaline Mob back into their jackhammering drums, soaring vocals, and classic Metal sound, which is continued through “’Til the Head Explodes” – with its pulsating rhythm attack – to the Arena Rock anthem “What You’re Made Of.” Angry vocals spit that the murderers and thieves have us down on our knees, we are all victims to “Ignorance & Greed,” while there is an inherent truth to the tale of “Blind Leading the Blind.” Bass-heavy “Violent State of Mind” propels the band into the atmospheric, soaring, biting Metal journey that is “Lords of Thunder,” another must hear offering. They end off on a truly classic note with a cover of Billy Idol’s “Rebel Yell,” where they do the anthemic rocker full-on justice.

Packed to the gills with full-throttle, adrenaline-fueled Rock-n-Roll, We the People is a triumphant return for a band who has seen hardships and risen to conquer them all with panache. There are some tales that rise from political beginnings, sure, but this is hardly a political album. Instead, Adrenaline Mob acknowledge what is happening in America today, offer some perspective, and then turn the volume up to eleven to save us all with good, classic Rock-n-Roll. For their ability to rise like that proverbial phoenix amidst the ash, CrypticRock give Adrenaline Mob’s We the People 4 of 5 stars. 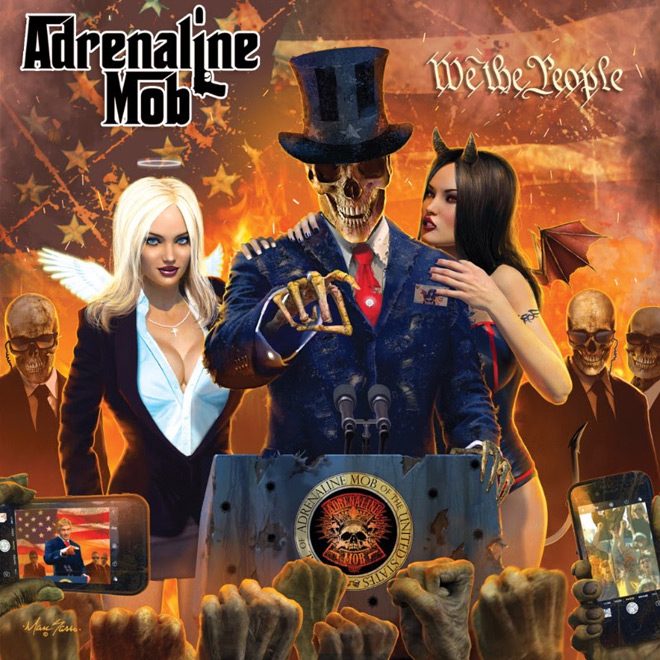