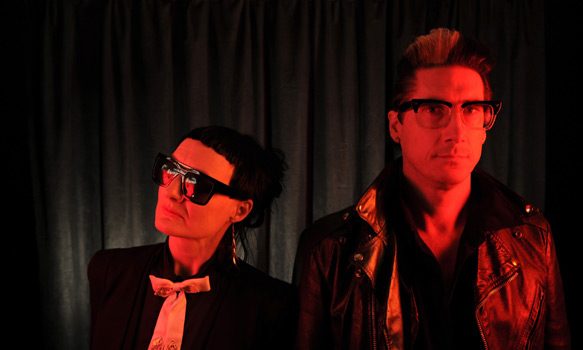 When referring to the word adult, chances are most immediately think of something of an X-rated nature. Of course an accurate assessment, get your mind out of the gutter for a minute and turn your attention to the Detroit, Michigan based duo Nicola Kuperus and Adam Lee Miller calling themselves ADULT.

A musical project that came together back in 1997 originally under the name Artificial Material, the husband-and-wife creative team quickly gained themselves a following with their unique blend of Electronic music. Known to many on the scene in their hometown, as well as pockets of Germany and the UK, through the years ADULT. has continued to grow their fanbase through heavy touring, and the consistent release of new music.

Delectably so, “Breathe On,” featuring Michael Gira, is ethereal confusion. A vibe that is felt often throughout the new album, it is possibly a nod to the chaos of the duo was involved in under names such as Plasma Co. or the aforementioned Artificial Material. That said, as ADULT. they have released six albums and nineteen EPs or singles on Ghostly International, Thrill Jockey, and Clone Records, as well as on their own label, Ersatz Audio. In addition, they have remixed over twenty acts as well, including Tuxedomoon, John Foxx, Death in Vegas, and Pet Shop Boys (for Moog Music). This plethora of facts makes “Into the Drum” featuring Lun*na Menoh seem rather fitting with its perfect, hollow, and empty spaces filled with question. Certainly performance art for the listener.

Then there is “We Are a Mirror” with Douglas J McCarthy making an entrance with steel drums leading the party. Lyrically it is a message for the soul, driven by percussion where rhythm is king. This is prior to the Electronica ride “Enter the Fray” featuring Dorit Chrysler, a cut for fans of modern experimental music. Scratching right in with Lun*na Menoh on “Uncomfortable Positions” and Shannon Funchess on “We Chase the Sound,” both tracks sound like electronic orgasms. The latter a more harsh beat, the sounds are entrancing, yet ethereal.

Now with the rave in full swing, collaboration with Douglas J McCarthy on “They’re Just Words” proves to be extreme auditory brilliance. Coupled with the simple beauty of the lyrics, the 1980s vibe gives listeners a handle to hold on to when the floor drops out. Next teaming up with Dorit Chrysler, “Inexhaustible” haunts with a chorus of angels punctuated by alien electronica. Sounding like a ghost on tape, it is like stepping into the Tardis again for another ride. Feeling unsure of where the journey is heading, the heavy-handed Devo-styled “Stop (and Start Again)” with Shannon Funchess assures it will remain unpredictable.

Finally, all the best of the New Wave scene comes to mind with Robert Aiki Aubrey Lowe on “This Situation” and the sampling segments of reality, matching a calypso atmosphere, on “As You Dream” featuring Michael Gira to close out the album.

Students of art with degrees, Kuperus and Miller, painters and sculptors, it is easy to hear on Detroit House Guest. The phenomenal aspect of ADULT. and Detroit House Guests is the feel of real creation. Breathing and alive, it comes from a purely experimental Electronica album that is elegant and trippy. Enter with an open mind and open ears. CrypticRock gives Detroit House Guests 5 out of 5 stars. 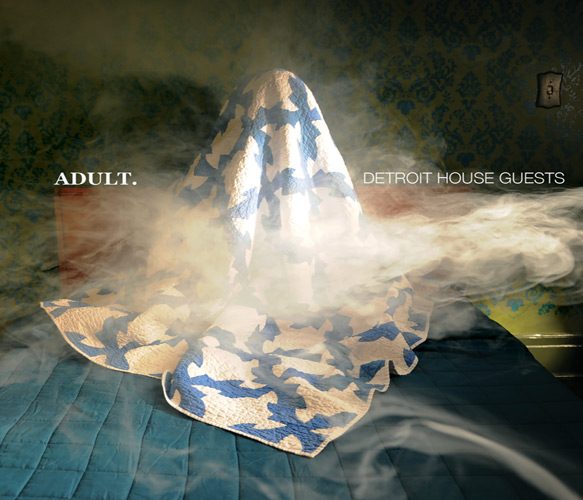