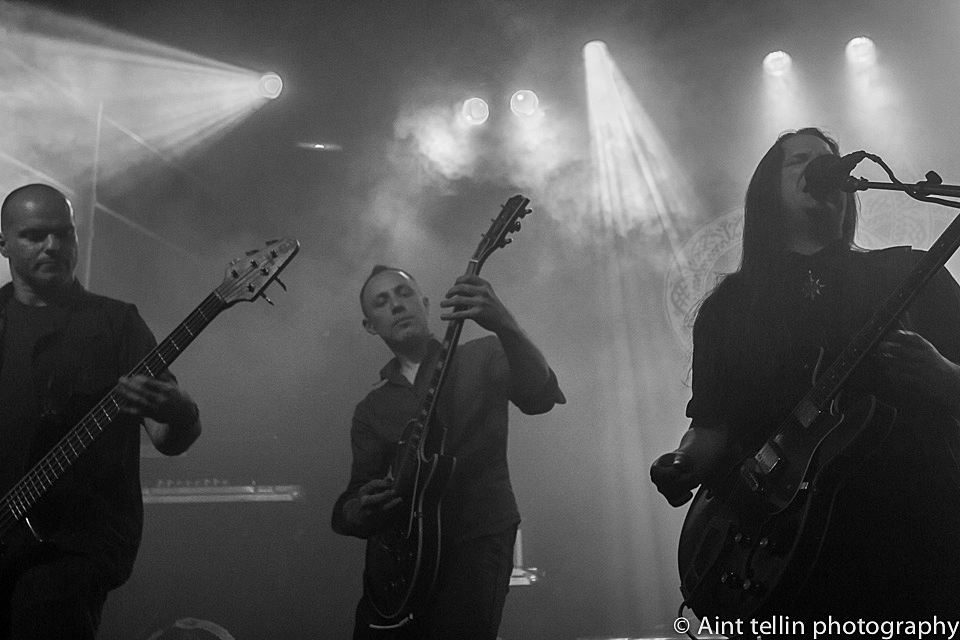 The line stretched down the block and clear around the corner at Irving Plaza on Monday, June 30th. The masses had gathered to catch two musical prodigies visiting from the American west.  Portland, Oregon’s Agalloch and Madison, WI mysterious Jex Thoth were in town; a cool and perhaps unexpected combination that lent a sense of the special to the night’s proceedings. As the doors opened the humid Manhattan air lay heavy on the asphalt, redolent with the odors of bus exhaust and pregnant with the sound of blaring horns. Did fans have any clue that they were leaving this oppressive world behind and walking into the elegantly woven web of a magic spell?

Friends were met and drinks were imbibed amid a pleasant buzz of conversation, bereft of any opening acts to disturb the anticipation. Then the house lights went down and suddenly Irving Plaza and everyone in it was transported somewhere else. Jex Thoth is fronted by a woman who goes by the name Jessica Toth. In some faraway universe she is most likely a mortal, but here upon the stage she became something surreal. Opening with “To Bury,” Jex Thoth immediately weaved the tendrils of their spell over the audience. Rapt and oddly subdued, a horde comprised of all different molds of ‘metal-head’ watched Jessica carry the ambient opener to their latest album ‘Blood Moon Rise,’ with only the strength of her fluid voice. Clad in a dark cape over a stunning black dress, Jessica channeled her band’s music in a slow, hypnotic dance as smooth as the incense which wafted around the venue. Next song “The Places You Walk” poured its slow burning, bygone vibes into the crowd, fading the borders of the venue until we all could have been standing somewhere else, decades and worlds away from this post-millennial New York summer.

Like an apparition, Jessica danced and swayed through songs such as “Nothing Left to Die”,”Raven Nor The Spirit,” and “Keep Your Weeds,” holding the crowd fast in the palms of her outstretched hands. She did not even have to speak. Surges of cheering greeted the conclusion of each song Jex Thoth played. The evocative ‘Separated At Birth’ stirred those gathered even deeper into enchantment. There in Irving Plaza a solstice of sound had descended from above to permeate all, from beer-stained floor to dusky black ceiling. All were bound in its grip. The bewitching front-woman entered the crowd at one point, dancing in our midst like a mad satyr. She wielded a stick of burning incense around her, handing it off to this lucky scribe helpless under her gaze. Rarely has a band so enthralled an audience without the assistance of speed, heaviness, a light show, or some other technological innovation to help create an atmosphere. Jex Thoth closed with ‘Son Of Yule,’ the strains of their organ sending them off without undue fanfare. Even after they departed they left an afterimage on every molecule in the venue, dancing behind the eyes of all who bore witness to their outstanding performance.

It was not a particularly long wait before the headliners took the stage. Like the mighty trees of the American northwest, Agalloch is a steady and veteran presence on stage. Gloomy and backlit, they took their places with one purpose in mind – to bring forth the majesty of their music without drawing any attention onto themselves. The crowd welcomed them with a high degree of enthusiasm; by now their body of work has eclipsed and outclassed that of many of their contemporaries. In short, the word has spread.

Opening with a triumvirate of songs from brand new album The Serpent & The Sphere, Agalloch weaved epic guitar styling and progressive waves of perfection to once again bewitch this oh-so-lucky crowd. The guitar sounds of vocalist/guitarist John Haughm and guitarist Don Anderson blended together as one, their dark and deep tones creating a cerebral atmosphere that takes the listener headlong into the cascades of melody and melancholy that comprises their sound.

“Limbs” off of the stellar Ashes Against The Grain (2006) was where Agalloch departed from the new album to the sonic pastures of records past. This song waxes and wanes until that familiar lilting lead sprouts from a bedrock of acoustic melody. The tension in the crowd was building as the monstrous song pummeled to its conclusion. Next the familiar introductory notes of “Ghosts of the Midwinter Fires” took hold of the fans’ hearts, the icy cold mood somehow managing to warm up the venue. Even when Haughm’s frigid rasp rode the melodies the love the crowd had for the band could be felt. It was here that Aesop Dekker’s masterful drumming stirred this watching crowd into the night’s first mosh-pit. The persistent repeating lead in this song is one of the most epic, lovely pieces you will ever hear in all of metaldom. To experience it in Irving Plaza on this night was as magical and eternal as anyone could hope for.

From here it was back to the new album with the wondrous “Dark Matter Gods,” already on its way to being a fan favorite. The new material went along superbly with the older songs, as Agalloch has proven time and again that they possess a timeless continuity to their music. Bands like this just don’t come around very often. If they did, nights like this might not seem as special as they are.

Emotion and longing continued to be wrung from the crowd as Agalloch flawlessly executed  “….And the Great Cold Death of the Earth” and “Into the Painted Grey.” The former with its clean-sung passages and acoustic strumming, and the latter with its contrasting epic black metal majesty. This set the table for the penultimate number, the gorgeous “Falling Snow.” If guitar leads get more beautiful than this, the world has yet to hear them. Closing with “Plateau of the Ages,” Agalloch showed once again why they are the kings of progressive black metal. Truly a special night, those in attendance poured back out into the humid Manhattan night, slightly altered from who they were when they came in.