The past year has been a busy time for Spy Thrillers. If one did not catch James Bond in No Time to Die, or Michael B. Jordan in Without Remorse, they could catch Chris Pine in The Contractor. Joining their ranks is Agent Game– a film about intrigue, conspiracies, and other mysterious goings-on within the CIA. Mike Langer (Kevin Hart: Don’t F**k This Up 2019, Burying Yasmeen 2019) and producer Tyler W. Konney (Emma’s Chance 2016, Black Water 2018) wrote the script, while Grant S. Johnson (Frat Star 2017, Nighthawks 2019) directed the film overall.

Released in cinemas, digital services and On Demand as of April 8, 2022 via Saban Films, in it, CIA Agent Harris (Dermot Mulroney: Angels in the Outfield 1994, Shameless series) is an interrogator for one of the agency’s black sites. All is well until his superior, Bill (Jason Isaacs: Black Hawk Down 2001, The Death of Stalin 2017) and a detainee (Barkhad Abdi: Eye in the Sky 2017, Blade Runner 2049 2017) are killed during an interrogation gone wrong, and Harris gets blamed for it. Left with no choice, he goes on the run from a team of operatives sent to capture him.

He has to stay out of their hands long enough to discover what really happened, why he is being targeted, and how involved another superior, Olsen (Mel Gibson: The Road Warrior 1982, Braveheart 1995) and Visser (Annie Ilonzeh: He’s Just Not That into You 2009, All Eyez on Me 2017), a double-agent, are in the plot against him.

The film feels surprisingly svelte by current standards- just under 90 minutes long. The synopsis above covers nearly two-thirds of the entire film. Except it is only part of the film. It plays out like two connected shorts alternating between each other- the interrogation drama with Harris, Bill, etc, and a plot with the operatives who have their own problems with an escort mission on a plane. As such, it takes a while for the two stories to meet up and get to the whole chase part of the flick. 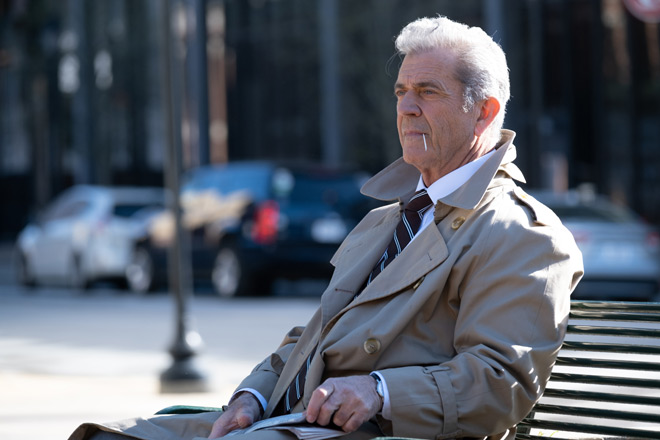 That said, that long, quiet start might be better than the more typical boom-bang action of the climax. The character interactions are quite strong thanks to some solid performances and writing. Such as how shifty Kavinsky (Adan Canto: Narcos 2015, Designated Survivor series) gets with his team while Miller (Katie Cassidy: Click 2006, Arrow series) tries to keep a cool head, building up to the climax of their plot. Gibson is also admittedly fine as the top guy who can get into people’s heads, knowing more than he lets on. Not that he appears much. Mulroney does okay, though for the film’s protagonist, one would think his character would leave more of an impact.

The strongest performance would likely go to Isaacs. His scenes- particularly the interrogations with Abdi- come off so effectively that one would think his character would be the lead on the run. His reasonable way of speaking, with a touch of insidiousness (his character is a CIA agent after all), makes him the more engaging of the two. So, it is a good thing the film gives the audience plenty of time to see him in action.

That said, the film does look a touch cheaper than its rivals. Not massively so- it obviously does not have a Bond-esque budget. It just looks a touch below something like Blacklight, while being much more coherent in its camerawork and editing. Lighting’s not so bad either, especially with the moodier scenes- the interrogation room being a dingy, dark beige, while the airplane is all blue and cool. They make the scenes all the more striking and memorable.

It all sounds great, but are there any drawbacks? Ilonzeh is slightly weak compared to the rest of the cast. She is fine when her character is keeping cool, but she sounds strained when she needs to sound more emotional. Rhys Coiro (Entourage series, Straw Dogs 2011) is also a rough touch, but not because of his acting. He does his role well for the most part. Nope, he is just unlucky enough to have the film’s worst lines (“Yeah, hairier than your mom’s nipples!”). His character, Reese, is meant to be his team’s comic relief on paper. In practice, he is proof Langer and Konney do better at plot twists and suspenseful narrative than banter and one-liners.

Overall, despite being lower on the totem pole, Agent Game is actually one of the stronger Spy Thrillers on offer. The plot carries plenty of suspense, with some inventive twists and use of non-linear storytelling, and the camerawork is coherent and easy on the eyes. That is not to mention the mostly solid acting, despite some duff lines and line-reads. Still, the climax does feel rather so-so compared to its buildup. As such, the film is unlikely to blow anyone’s minds. However, it does have the potential to be a hidden gem. As such, for these reasons, Agent Game gives this film 3.5 out of 5 stars.

Blacklight (Movie Review) The Batman (Movie Review)
Like the in-depth, diverse coverage of Cryptic Rock? Help us in support to keep the magazine going strong for years to come with a small donation.