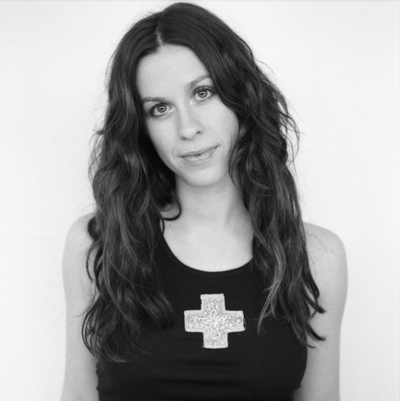 Twenty years ago, the US met Alanis Morissette. With two previous albums released in Canada, Morissette became an instan ngt sensation upon debuting in the US. Her popularity among the youth is easily understood, as she sang from her soul about the pain of a bad break-up, uncertainty, and the transition to adulthood. Her lyrics touched upon emotions too raw to talk about and sometimes too painful to face. She did this with honesty, temerity, and the ability to say what so many could not, would not, or should not. She was the newly appointed Queen of Alternative Rock angst, per Rolling Stone magazine, and she wore that title proudly. All those who were also having pain held her as the spokesperson for jilted lovers. She was the new and improved Gloria Gaynor of I Will Survive fame. The only difference is that Morrisette said it with prismatic waves of anger, sorrow, rage, and sensitivity all thrown together. She took the breath away from many and allowed her fans to distill their pain into a shared crucible of expression that was uniquely hers.

Alanis Nadine Morissette was born on June 1st, 1974 in Ottawa, Ontario, Canada. She played piano at age six, and it was obvious she was destined for greatness. In 1986, she cut a single called “Fate Stay with Me,” and in 1991, she recorded two Dance albums under MCA Records Canada as a Dance-Pop singer: Alanis (1991) and Now Is The Time (1992). Morissette moved to Toronto at age eighteen, but nothing much came of it at first. Finally, in 1994, she teamed up with producer-songwriter Glenn Ballard, who worked with Michael Jackson, Aretha Franklin, and Barbara Streisand, and it was a great fit. She moved to LA at age nineteen, and on June 13, 1995, Jagged Little Pill was born. Released on Madonna’s label, Maverick Records, Jagged Little Pill featured a unique, personal style of writing that many had been craving. The Grunge era was already going strong with many bands coming out of Washington State and Northern California, and Morissette had great timing. The world was ready and waiting for her “angst” music, in which she poured out her pain and soul with each lyric and each note played. Jagged Little Pill sold nearly thirty-three million copies globally, making it the second highest selling female album (Shania Twain’s 1997 Come On Over was No#1) and the third highest selling album of all time. Although the album has been considered by many to be autobiographical, and mostly centering on her painful split with comedian and actor Dave Coulier, Morissette has never confessed to that being true, leaving the true meaning personal like it is meant to be.

Other albums that followed Jagged Little Pill included Supposed Former Infatuation Junkie (1998), Under Rug Swept (2002), So-Called Chaos (2004), Flavors of Entanglement (2008) ,and Havoc and Bright Lights (2012). All wonderfully written and sung works, it is a testament to the enduring popularity of Jagged Little Pill that all these albums combined amounted to slightly less than the sales of the debut.. Altogether, Morissette has sold sixty million albums, won twenty-five awards, and been nominated fifty times. Her mesmerizing mezzo-soprano voice, with all its twists and turns, is more than interesting and curious; it is inviting. The listener wants to join in her pain and sorrow, confusion and uncertainty. The listener can relate and feels as if those very words are her own, just better expressed. Jagged Little Pill became a mega-platinum Grammy winning album, and to date, it has attained a status eclipsed by few other release.

Of all the awards Morissette has accumulated, among them are two American Music Awards, sixteen Junos, and seven Grammys. In addition, she’s had two Golden Globe and three MTV Music Awards nominations in 1996. Jagged Little Pill is considered #327 out of the 500 greatest albums of all time, and in 2005, Morissette was inducted into Canada’s Hall of Fame. March 8, 1996 was named Alanis Morissette Day in Ottawa, Ontario, Canada by the then mayor. She was ranked VH1’s #53 of the 100 Greatest Women of Rock-n-Roll. Two of her videos, Ironic and Thank U, were rated # 18 and #66, respectively, on VH1’s 100 Greatest Videos. Morissette, a talented musician, plays guitar, piano, flute, and harmonica. She can also add acting to her list of talents as she has been on numerous television shows, including, You Can’t Do That on Television, Nip/Tuck, Weeds, Sex and the City, and Curb Your Enthusiasm. She has acted on off-Broadway productions, a few movies throughout the years, and even played God in the movie Dogma (1999). In 2005, Morissette became a US citizen, while maintaining her Canadian citizenship. There appears to be nothing this beautiful, long-haired Canadian woman can not achieve in life. Her marriage to Mario “MC Souleye” Treadway, in 2010, produced her first child, Ever Imer Morissette Treadway, who was born on Christmas day, a few months after the wedding. It appears her angst may be just a memory for now.

In listening to Jagged Little Pill, it becomes obvious that Morissette knows how to put down the very words that will grab you and not let you go. It is a roller coaster ride to hell and back, but there is so much tenderness and vulnerability in the lyrics and vocals, that it’s clear this is not just about an angry broad who got dumped. It is much deeper than that. Almost every human has been hurt emotionally by another and can relate to the emotions of this album. What Morissette does with that general pain is quite remarkable. She takes each song to delve a bit deeper into just how a heartbreak pierces the soul. She gets personal with her sorrow and gets very explicit using words and phrases many wish they could have and should have said to whomever stuck that lover’s knife in their heart. Morissette said it all for the world.

Jagged Little Pill starts out with “All I Really Want,” using a smooth harmonica to fill in the space between the vocals and instruments. Within a few minutes, we are already able to see just where this album is taking the listener: to the deep emotions of a pain-ridden angry young woman who wants the world to know. The lyrics, “Do I wear you out?……Enough of me, let’s talk about you for awhile….If only I could kill the killer….what I really want is some peace now,” all prove the mindset of this song and there is much more to follow. For many a listener, this is exactly the fix needed: someone else in pain.

“You Oughta Know,” probably one of the most recognizable songs on the planet Earth, again, adds even more bite to the mood. Heartless lovers, beware! The music feels like it is stabbing, jolting the listener, as the lyrics are full of venom and strike out like a snake. “I’m here to remind you, of the mess you left when you went away…” Morissette screams, and then, as if she  has suddenly contained herself, she quietly speaks, “You seem very well, things look peaceful/I’m not quite as well/ I thought you should know…” before returning to the high-pitched kaleidoscope vocals from earlier. What surprised most listeners about this song was the infamous line, “Is she perverted like me, would she go down on you in a theater?…Do you think of me when you fuck her?” Back in 1995, such things were typically only implied, never said bluntly like this — at least not by female singer-songwriters. Many people have felt the same way as she did, but she actually spoke the words.

A few ballads on this album show that Morissette really does have a beautiful tone and quality to her voice. “Perfect” starts out quiet and subdued with a nice folksy acoustic guitar, strumming a lovely melody that complements her gently cry. But soon enough comes the penetrating voice that touches your soul. The roller coaster ride has started. The lyrics here are a reminder that to some, our best is just never good enough and sometimes we try so hard, but to no avail. “Forgiven” and “Mary Jane” are also like ballads with an acoustic start on “Forgiven” and a soft tone to the vocals, followed by that roller coaster of angst that then again returns to a controlled, reflective piece. “Mary Jane” could easily be a teen anthem, then and still today. Folksy and reminiscent of Joni Mitchell, it describes how society has a tendency to make many young people feel inadequate. The lyrics, “You’re going full speed baby in the wrong direction…..Please be honest Mary Jane/ are you happy/please don’t censor your tears” show how we all tend to fool ourselves and not be truthful when we are self-destructing. “Hand in My Pocket,” another popular single, also sounds folksy, with Bob Dylan like harmonicas, but more profound are the vocals and the lyrics. The struggle in her voice is equal to the struggle in her words: “And what it all comes down to, is everything’s gonna be fine, fine, fine./ I got one hand in my pocket and the other ones’ giving a high five.”

“You Learn” and “Head Over Feet” are extremely popular tracks from this LP, both quite well-written and executed. These are a little softer than the hard-hitting tunes on this LP, and they have a very artsy tone. The listener will especially enjoy all the different genres of sound in “You Learn.” There is a Pop-Folk beat, then Soft Rock, and a nice easy rhythm with melodic background vocals that weave into an interesting collection of chords and sounds that resemble a Native American sound. Lyrics like “You live you learn/You love you learn/ You cry you learn/You lose you learn/you bleed you learn/ You scream you learn” neatly sum up the variety of emotions displayed on this album. “Ironic,” the most popular song on this LP and the best selling single, once again has great lyrics that almost overshadow the incredible musical blend of flats, sharps, and melodies all fused together.

This entire album, song for song, is everything a great album should be. It lasted twenty years, and with its raw emotions, pain, and the universal topic of heartbreak, it will still be relevant twenty more years from now. Those who are already familiar with Jagged Little Pill, it is a guarantee the CD has been worn out, replaced on Mp3, and is still listened to it regularly. Those who have not heard this amazing piece of craftsmanship and raw honesty, get it now. Alanis Morissette did great things with her pain and anger, and because of that, all got to share with her a piece of human existence called heartbreak. Now that she is happily married and has a son, it will be interesting to see what she has in store for our next big ride. Fans can only wait and celebrate Morissette and Jagged Little Pill, and be thankful for its existence. 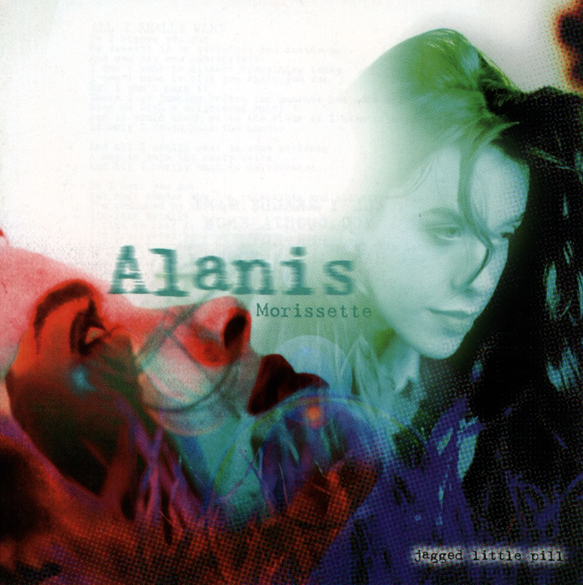