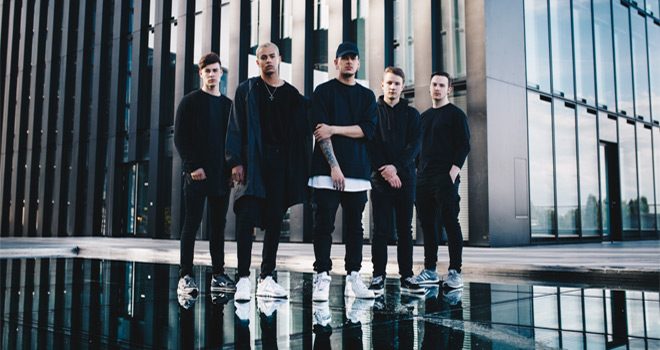 It is difficult to find much unique in the oversaturated Metalcore genre, but every once in awhile a band stands above the noise. Out of Western Germany, falling under the Metalcore subgenre, the band known as ALAZKA emerge with something well-worth talking about. Originating under the name Burning Down Alaska in 2012, the young group of musicians have grown over the last few years, finding their sound.

Consisting of Harsh Vocalist Tobias Rische, Bassist Julian Englisch, along with Guitarists Marvin Bruckwilder and Dario Sanchez, together they released their debut EP, Values & Virtues, in March 2015. A positive step forward, there was still a missing piece to the puzzle and, in January of 2016, they took the next step in their evolution, adding the talents of second Vocalist Kassim Auale. Kassim, offering a clean singing voice to the mix, is much more than just such, his voice brings the band into an entirely different stratosphere.

Naturally, such a dramatic alteration called for shedding of past skins, hence the renaming of the band simply to ALAZKA in the early spring of 2017. A new beginning, shortly after, the band signed on with Arising Empire as well as SharpTone Records and on Friday September 1, 2017 bring the world their debut album, Phoenix.

Complete with 12 songs, the band waste no time grasping their audience with an otherworldly sound on “Echoes.” Light, it siphons on for one minute of euphoria as faint voices can be heard in the background somewhat like whispers, adding to the sadistically serene sound. A spontaneous delight, it flows seamlessly into “Ghost,” portrayed by the duality and harmony between Rische and Auale. Displaying an on-key balance, the alternating from the heavy screams to the clean vocals shift perfectly. Adding another layer, “Empty Throne” brings a song hard to forget with an infectious beat. A sensational vibe, the beat steadily speeds up consequently the vocals.

Moving on, “The Witness” is the perfect combination between Grunge, Rock, Electro Pop, and Hardcore. On the contrary, it is also light, catching listener’s attention with a drum beat that drops in before adding the synths, making for a flawless combination. Boggling the mind, “Everglow” starts off as what sounds to be the beginning of a slow acoustic track. Paradoxically, it suddenly speeds up and treats the audience with rich vocals, a striking drum beat, as well as electric guitar rhythm intrusion. Empowering and energetic, slightly heavier, it also provides a psychedelic feel full of sound.

More than halfway through the album, title-track, “Phoenix” begins in a very nostalgic fashion, taking the listener somewhere beyond. Savoring the sound of both vocalists, soon after a tasty slow down, the outcome is harmonious. Soft vocals along with high and roaring-out heavy deep screams, it is no holds barred. Tailgating, we have “Everything,” by far the most distinct of the album and sure to be a hopeless romantics fan-favorite. Soothing, a slick guitar solo halfway through add the sprinkles on top making for a delightful ambient treat.

Revving it up again, “Hearts of Gold” is sped up by screams of angst and a will to be understood. Backing Rische up, Auale lends a hand and takes the microphone. Sugary but jagged, the vocals are well enough alone, accompanied by the bass and the guitar that are sure to excite. Then, “Legacy” opens things up with a constant drumbeat in the background, in fact, it is persistent. From here, Auale’s clean vocals start it off, and after a seconds pause, screams are bellowed by Rische, followed by a brilliant breakdown that keeps things interesting.

All of this leads to “Blossom,” Auale’s first appearance as second vocalist, and a new beginning for the band. Complete with a gentle beat with a shift in sounds and faded voices and whispers, it is quite haunting. Paranormal activity, anyone? Finally, the dream-like state is concluded with “Fading Flame,” a cut with a more wishful sound. Echoing in time, ALAZKA craft a picture of who we are, like the phoenix rising from the ashes anew.

Overall, Phoenix is creatively a masterpiece in its own light. Unifying wailing scream with the powerful and unique clean vocals of Kassim Auale, ALAZKA have successfully separated themselves from the pack. Not only that, there is an underlying passion streaming from the pores of each song on this album. That said, ALAZKA should gain more listenership worldwide as they continue to tour. Phoenix will blow minds, and that is why CrypticRock gives this album 5 of 5 stars. 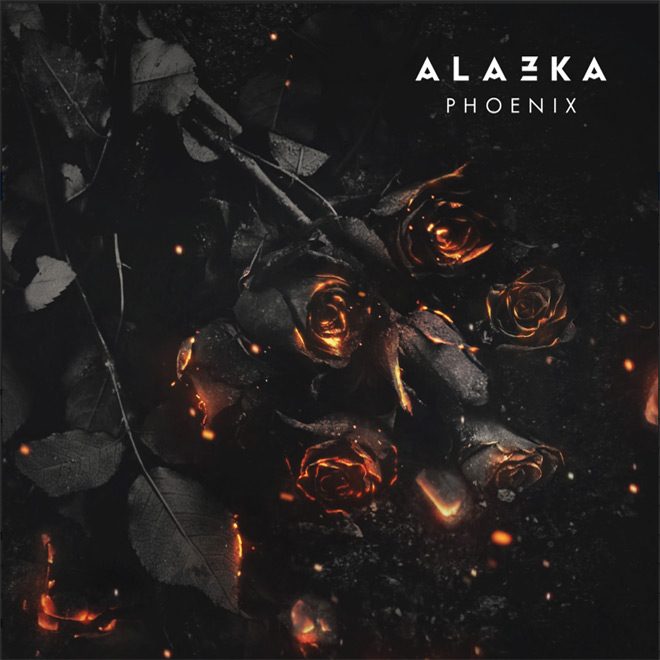 Architects – For Those Who Wish To Exist (Album Review) Tetrarch – Unstable (Album Review)
Like the in-depth, diverse coverage of Cryptic Rock? Help us in support to keep the magazine going strong for years to come with a small donation.