In the latest installment of the James Bobin (The Muppets 2011 and Muppets Most Wanted 2014) revamp of classic Alice Through the Looking Glass, Fantasy film fanatics everywhere were sucked into the strange, upside down realm that is the Underland, referred to more commonly as Wonderland by Alice. Written by Linda Woolverton (Alice in Wonderland 2010, Maleficent 2014) and produced by Tim Burton (Batman 1989, Edward Scissorhands 1990), the film’s adaptation is loosely based on the novel Alice through the Looking Glass by the incomparable Lewis Carroll, and the highly anticipated follow-up to Burton’s 2010 film, Alice in Wonderland. Released by Walt Disney pictures on May 27th, 2016, the film did not bare nearly as well as the first movie did in numbers, but what do the hardcore fans think? 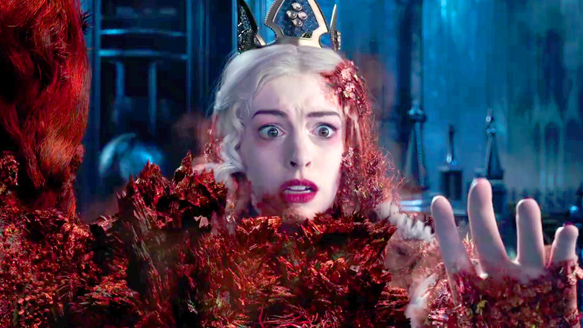 Following up three years after 2010’s Alice in Wonderland, Alice Kingsleigh (Mia Wasikowska: Alice in Wonderland 2010, Crimson Peak 2015) finds herself once again in a quagmire, as her ex-fiancé Hamish Ascot (Leo Bill: 28 Days Later 2002, Alice in Wonderland 2010) has taken over her late father’s company as she sailed her father’s ship (suitably named The Wonder) from London to China for adventure and business both. Sure enough, just as any time Alice is presented with a conundrum, she finds herself once again in the magical, fantastical world of Underland where everything is not as it should be. The lovable Mad Hatter (Johnny Depp: Blow 2001, Pirates of the Caribbean series) has fallen ill, more mental than usual, and the White Queen (Anne Hathaway: The Devil Wears Prada 2006, Interstellar 2014) requests that Alice help the ailing Hatter as the rest of the returning gang are unable to help him.

Hatter is convinced his family, who he formerly believed deceased, is actually alive, although no one believes him, causing him to become sicker and sicker. Without giving too much away, Alice must brave the powers that be once more, traveling through the oceans of time, competing against Time himself (Sacha Baron Cohen: Borat 2006, Brüno 2009) to save Hatter’s family from their grisly demise. Along the way, she stumbles into more trouble than she bargains for, and secrets that may hold the key to more than just the Hatter healing. 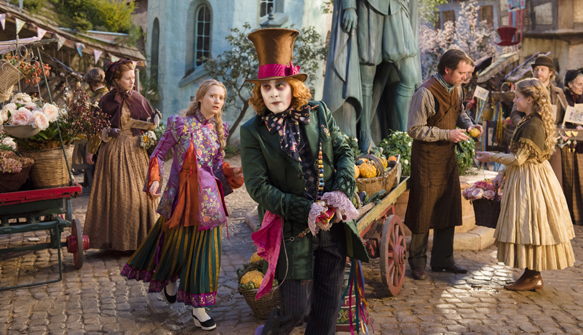 In Alice Through the Looking Glass, viewers see the return of Depp (aforementioned Hatter Tarrant Hightopp), Iracebeth; aka The Red Queen (Helena Bonham Carter: Fight Club 1999, Sweeney Todd: The Demon Barber of Fleet Street 2007), Mirana; aka The White Queen, and many more including the vocal talents of the late Alan Rickman (Die Hard 1988, Harry Potter series) as Absolem, and the iconic Cheshire Cat (Stephen Fry: Sherlock Holmes: V for Vendetta 2005, A Game of Shadows 2011). As far as production value, the directors did a grand job portraying the Underland as the wonderland it is. With riveting splashes of color, expertly crafted scenes, and artistic camera work, viewers are exposed to the enthralling world once more.

In addition, the soundtrack, rendered by the amazingly talented Danny Elfman, is spectacular and helps bring every single scene to life. Whether subjected to an adventure scene or particularly intense emotional moment, the impact resonates deeply with the orchestrated soundtrack to complement the on-screen fantasy come to life. Other composers on the soundtrack include Alecia Moore (P!nk), Max Martin, Karl Schuster, and Oscar Holter, who, as a team, wrote the addicting Pop track “Just Like Fire” for the film.

Besides the special effects and film quality, expertise was also shown in the extravagant props and costumes worn by the cast. In splendid and vivacious garments, the viewer is delighted to see their favorite characters run around in this adventure; including Alice’s own epic captain’s costume. Perfectly attuned to the era, the exquisite jewelry pieces and furnishings are lavish and not at all out of place, completing the look (alongside the looking glass itself, a delicate mirror mounted on a parlor wall in which Alice goes through into Underland). Some of the props were just plain fascinating to stare at, such as the time traveling Chronosphere or even Hatter’s hats and garbs. 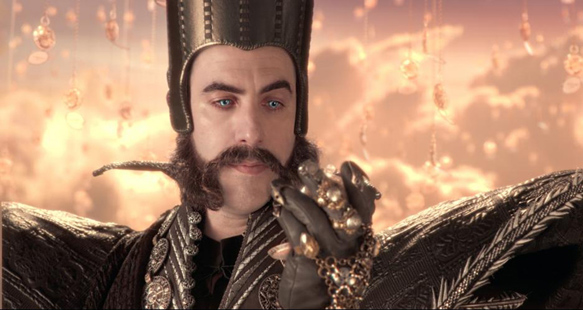 Behind the facade of wanderlust and fairy lights, there is a message to the movie. Viewers will find themselves thoughtful after the film, contemplating deep themes such as life, death, grief, growing up, love, loyalty, time, and, very heavily emphasized, family. The themes featured in the film were finely weaved into the adventurous plot with just enough subtly as to not overtake the fun of the film itself.

Finally, Alice through the Looking Glass is like sensory candy: it is delightful to watch and listen to, easy to immerse in. Watching a fantastical adventure with a moral lesson is just the icing on the cake to this rejuvenated Fairy Tale. That all in mind, CrypticRock gives Alice Through the Looking Glass 3.5 out of 5 stars for its endearing storytelling. 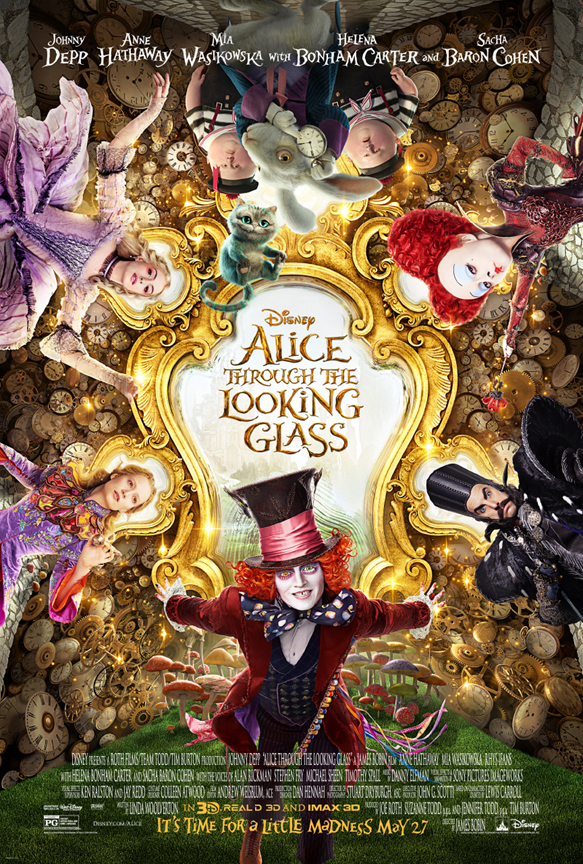