For those viewers old enough to remember, star of ’70s television series Battlestar Galactica actor Richard Hutch, carries on this theme by making an appearance as Ranger Mike Gibson in latest Sci-Fi Horror, Alien Hunger. Hutch is joined by Australian actor Vernon Wells, star of films such as Commando (1985) and JAG (2000), who plays Sheriff Thom Baker with a good humored camaraderie between the two carried throughout the film. Alien Hunger will be released on a date to be confirmed sometime in 2015 via XVIII Entertainment LLC . The events of Alien Hunger take place in a National Park in Santa Clarita, California, where it was filmed. Written and directed by stuntman and actor Edward Conna (The Dead Undead 2010, The Linda Vista Project 2014), Alien Hunger uses a number of points of view, including first person. 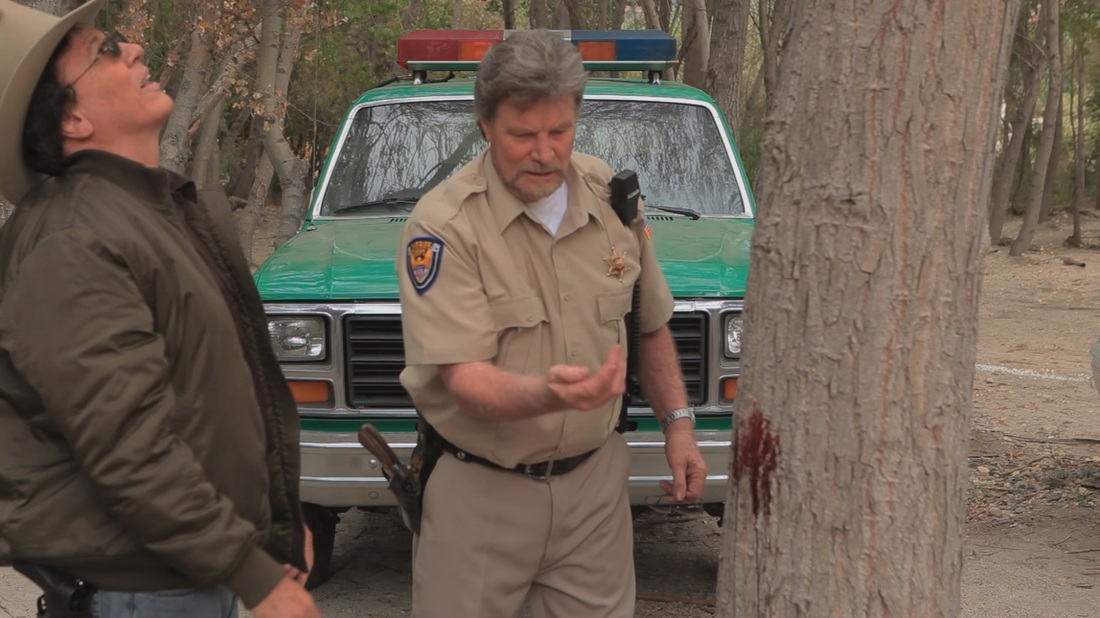 At the beginning of the story, after a strange light falls through the sky and crashes in the woods, we see a couple as they are camping. Shortly after the crash, the same campers are attacked by an unseen but brutal assailant. As a consequence to the crash, a number of uncontrollable fires break out in the woods. Ranger Mike recently moved just outside the park with his daughter Cassie (Lisa Cullen: Kin: Fallen Star 2015, Death Dream 2015), after the death of his wife. Their niece Jenny (Dana Flynn: The Contract 2006, The 3 Minute Update series), an ER nurse, comes to stay with them for a couple of days. It is not a great time as Mike is required to evacuate all the campers out of the woods because of the fires. However, this is not an easy task and a group of bikers including Snake (Clint Jones: Paulie 1998, X-Men: First Class 2011) stay to party, and some hunters headed by Bubba (stuntman George Fisher: Father vs Son 2010, Grown Ups 2010) also stay, putting themselves in grave danger and not just from the fire. 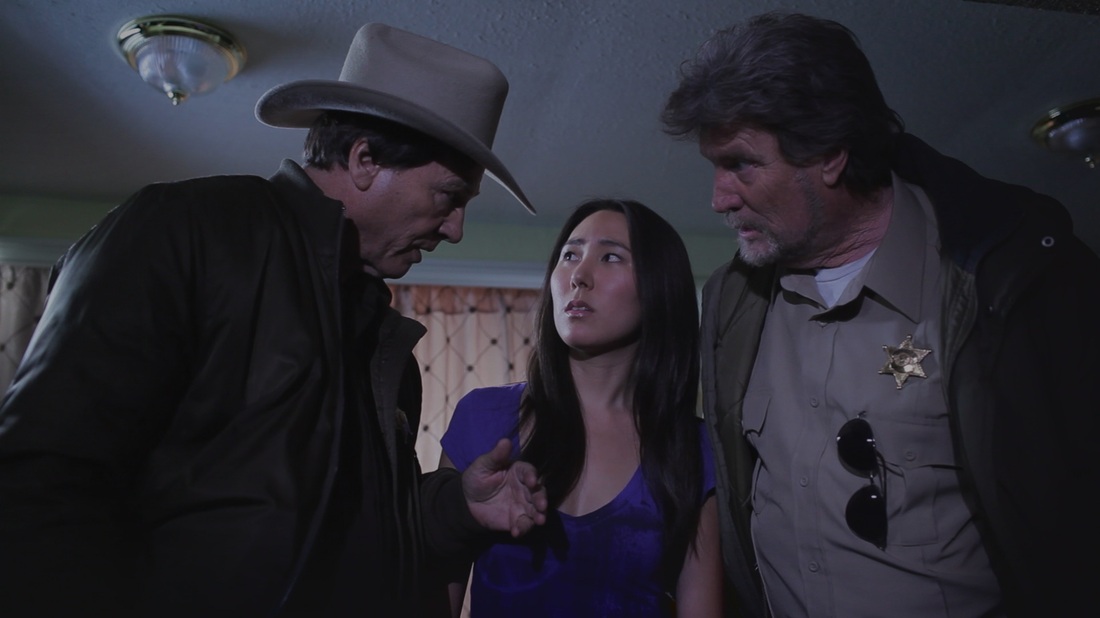 The crash has also stopped all radio, cell, and satellite services. Unable to reach Mike by radio, Sheriff Thom meets Mike in the woods. Mike has just discovered bloody remains hung from a tree, Predator (1987) style. Mike shows Thom remains on the ground, though the remains in the tree have disappeared. Thom immediately becomes concerned that a person has been killed and attempts to contact headquarters with no success. As they discuss how they will deal with this, they both see a strange creature that tries to attack them. It becomes clear that the crash and the killing are related, and everyone still in the woods is at risk. Thom and Mike barely evade one creature, only to realise there may be two. They return to Mike’s home where they are greeted by Cassie, Jenny, and a few remaining campers seeking protection from the fires. But, little do they know, they are all sitting targets. 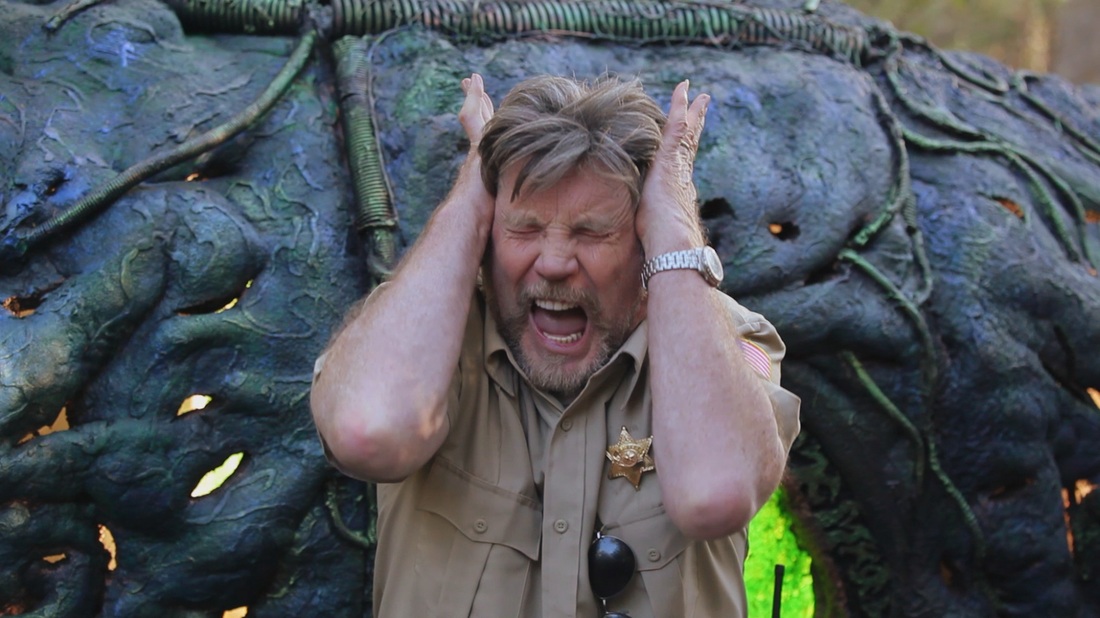 Mike and Thom watch helpless as, one by one, the campers are picked off by the strange creatures and eaten. The survivors must band together to discover a way to fight the creatures and protect themselves, which is no easy task. Supported by a diverse cast, Alien Hunger faces an age old fear of alien abduction, or worse, with an action-packed plot line. While it is not original, nor is it an A-list film, Alien Hunger is certainly entertaining. Plenty of blood and gore are highlighted by the seamless special effects, with dismemberment scenes to rival the Eli Roth’s Hostel series and a face-off scene that will make viewers squirm. The scene where one of the campers legs regrows is spectacular. The Cinematography by Peter Lugo (Long Distance 2013, Malibu Road 2015) captures the deep, dark, and scary woods in California, ensuring a scary atmosphere in both night and day scenes. There are some subplots that do not make much sense, but with that said, the rest of the film makes up for it. Younger viewers may not understand the in-jokes made within the film in relation to Hutch’s and Wells’ earlier works, which provides some light comic relief during dark moments. Outtakes from the film appear through the credits which shed some light on Conna’s creative process. Worth watching, CrypticRock gives Alien Hunger 3 out of 5 stars. 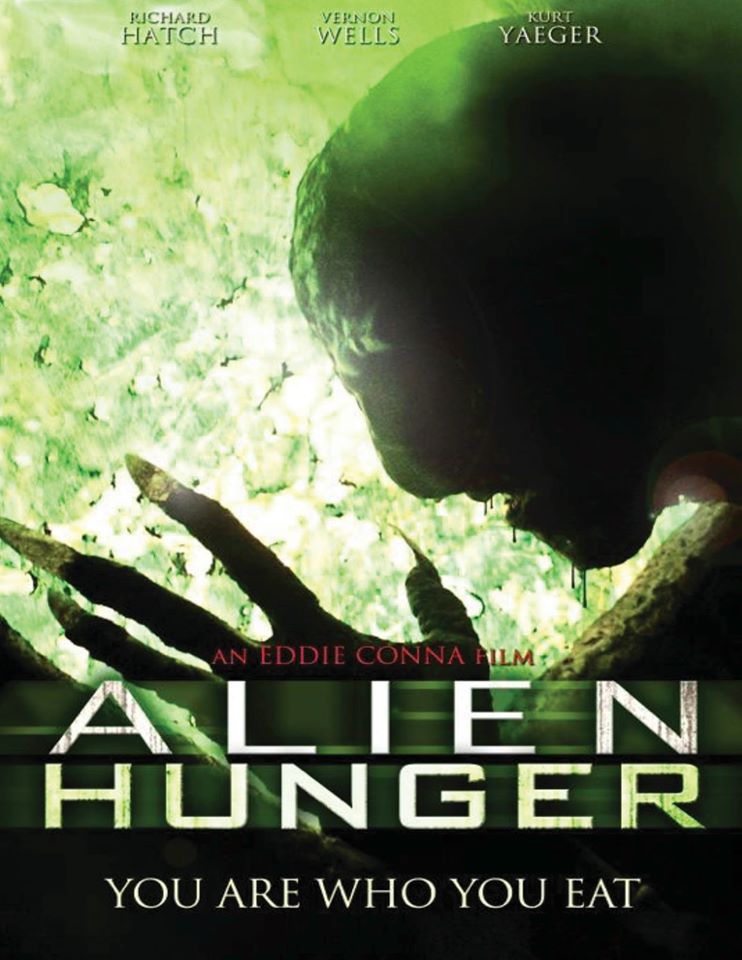