Break out the party hats, ladies and gentlemen, the banners, cake, and candles, too: for it is time to celebrate the 20th anniversary for the movie Alien: Resurrection!——rrrrrrrrippp. This is where the needle on the record dramatically skips, when all the partygoers freeze in place, and when chins hit the floor. Someone shouts: “Why, in the name of Crom, would anyone want to celebrate an anniversary for a movie like that?” 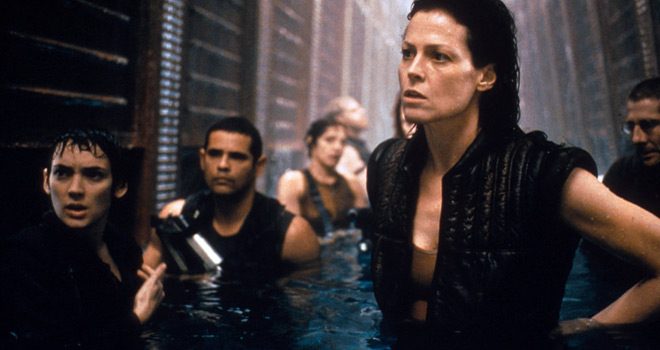 The answer to the question was a long-winded one, seemingly as a way to defend the film against all the naysayers and the negative press it had first received during its release. In any case, there is a lot about Alien: Resurrection to love and for many, many reasons. So, have a seat, grab a slice of cake, and eat while the answer to the question is revealed.

See, back on November 26, 1997, the distribution company Twentieth Century Fox released Alien: Resurrection to expand upon a story-line that originated back in 1979, when Director Ridley Scott and Writer/Creator Dan O’Bannon scared the wits out of people with their film Alien.

Since Alien was so successful, two sequels had spawned: James Cameron’s 1986 film Aliens and David Fincher’s 1992 film ALIEN³. Aliens went on to be a box-office smash, and was put on a list as being one of the greatest sequels ever made. Alien3, on the other hand, barely made back its 50-million-dollar budget domestically, though was a huge international sensation, putting its total close to 160 million dollars. Fincher’s version revisited the likes of the very first film but some moviegoers felt it was a little too dark and overly grim, and with a plot that was also questioned since its release. Fincher’s sequel also killed off two beloved characters at the very beginning, and one more at the very end.

Fast forward to 1997, when Alien: Resurrection was released, fans, again, scratched their heads raw, pondering what had just been seen on the big-screen. Reviews were poor, fans were left divided, and people were disregarding the movie altogether. Alien: Resurrection was no box-office bomb as it had been perceived. While it fared not so well in America, it had been a sensation overseas. 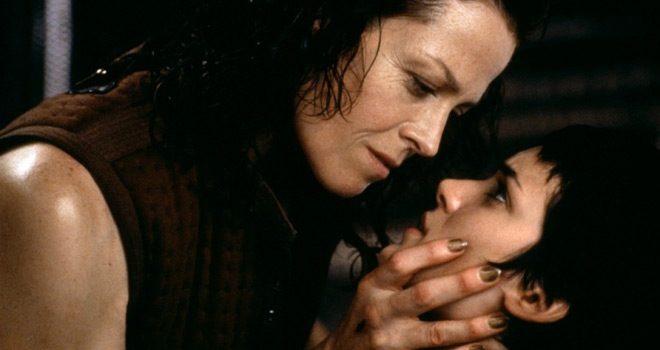 The trick in getting people who did not like the movie to better understand it would be to introduce the director. Once acquainted, only then will Alien: Resurrection reveal itself as the masterpiece hardly anyone ever noticed.

Introducing Director Jean-Pierre Jeunet, a French movie-maker with an impressive portfolio” responsible for such films as the creepy 1992 comedy-romp Delicatessen, the dark, mind-twisting 1995 Sci-Fi/Fantasy flick The City Of Lost Children, and for the sweet, feel-good 2001 Romantic/Comedy Amélie in—to name only a few. When the announcement was made of Jeunet’s attachment to the Alien sequel, many fans wondered how it would turn out, causing quite a stir. Not knowing a lick of English, this French director came aboard to take on a sequel to one of the biggest American films ever made, showing quite a bit of confidence in doing so; and in the end, proving he is a master at his art.

Jeunet usually writes his own films, too; however, this was not the case for Alien: Resurrection. Twentieth Century Fox hired Joss Whedon (Toy Story 1995, Buffy the Vampire Slayer series) to write the script, whose ideas made the producers happy and even piqued the interest of Sigourney Weaver when she had been approached. The first idea of the script was to bring back the character Newt—brought back as a clone, that is, but, in all seriousness, who was anyone trying to kid? Ellen Ripley (Weaver) is the true star of the Alien series and can never be replaced. Ripley is head-strong and always on her feet: she thinks first for the safety of everyone else, while putting her own life at risk. Ripley is full of heart and has always been seen as a powerful character.

So, because of this, the script was immediately changed, bringing back the almighty Ripley instead, 500 years past the events of ALIEN³, where a certain military and its scientists successfully clone her to retrieve the queen alien that had been in her body. After many failed attempts, the last version of Ripley is a hybrid: part Xenomorph/part Ellen Ripley. She can hear and feel her other half, and yields a superhuman strength as a result of the cloning process. 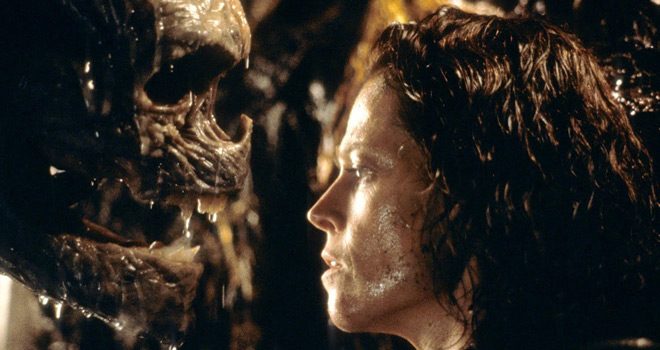 As with any movie that depicts an evil, selfish military—here, these fools want to learn from and to use these dangerous, scary-lookin’ aliens as secret weapons of such. In order for this military to study these vile creatures, it secretly hires a team of mercenaries to capture humans so they can be used as hosts for the breeding process. Big mistake: these Xenomorphs are a lot smarter, nastier, and meaner than any of their past (movie) incarnations. They break free from their holding cells, wreaking havoc upon the ship. Will Ms. Ellen Ripley and the team of mercenaries destroy these bastard aliens before the ship reaches its destination, earth? Press “Play” to find out.

To make this story-line even more interesting and quite a sight to see on the big-screen, director Jeunet perfectly mates his vision of dark humor and Sci-Fi/Action together, turning Whedon’s script into pure gold. Jeunet gave each character in the film an enormous amount of screen-time, which, in turn, gave viewers a unique way of getting to know and remember every single one of them—even while all sorts of crazy crap is happening.

Another type of Jeunet-like characterization and Jeunet-like atmosphere is the farce romance occurring between mercenary Johner (Ron Perlman: Hellboy 2004, Mutant Chronicles 2008) and Ellen Ripley. This faux-mance/flirtation thing happening between the two characters is a lot of fun to watch, especially for Ripley’s sharp-witted comebacks, her smirky smile, and for the many different countenances Johner makes as he is turned down.

The interesting thing is that Ron Perlman is no stranger to Jeunet, for he starred in The City Of Lost Children, alongside Actor Dominique Pinon (Delicatessen 1992, Amélie 2001), who stars here as Vriess: also a mercenary but bound to a motorized wheelchair, and a lot deadlier than he initially appears. Both Pinon and Perlman are fantastic actors, and appear to be having the time of their lives under Jeunet’s very watchful eye. 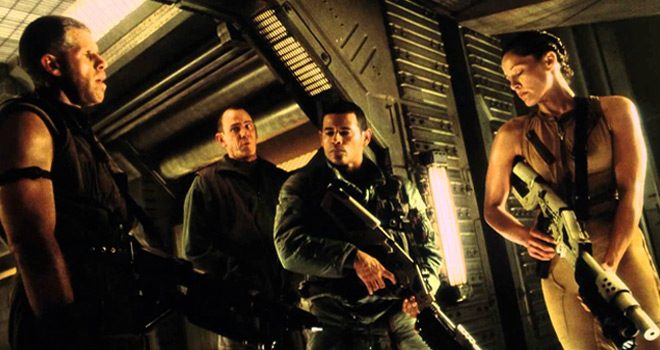 It gets even better, for also starring in Alien: Resurrection is Winona Ryder (Beetlejuice 1988, Stranger Things series) starring as Annalee Call, who has a teensy, weensy secret she would much rather keep to herself until the time is right. Ryder’s character may put off a lot of viewers for a little while but once things start going haywire in the movie, the true nature of Call’s actions will shine like an early-morning desert sunrise.

Alien: Resurrection is kind of like a megastore. Looking for Dark Humor? Action? Sci-Fi? Elements of scariness? In addition, there is even one scene towards the last portion of the film that will surely bring many tears to fall from the eyes. So, adding Tearjerker to the list, this film has it all; everything to satisfy the needs of everyone.

So, in conclusion to the long-winded answer, with great acting, spot-on directing, amazing practical SFX, and for having an original story idea for a sequel, Alien: Resurrection deserves to be in the spotlight on its anniversary and any day afterwards. Jeunet’s take on the Alien mythos is a lot of fun and very worth the watch. For those who at first did not like nor understand Alien: Resurrection, today is the chance to turn it all around. Make that change: press “Play” and enjoy the ride! 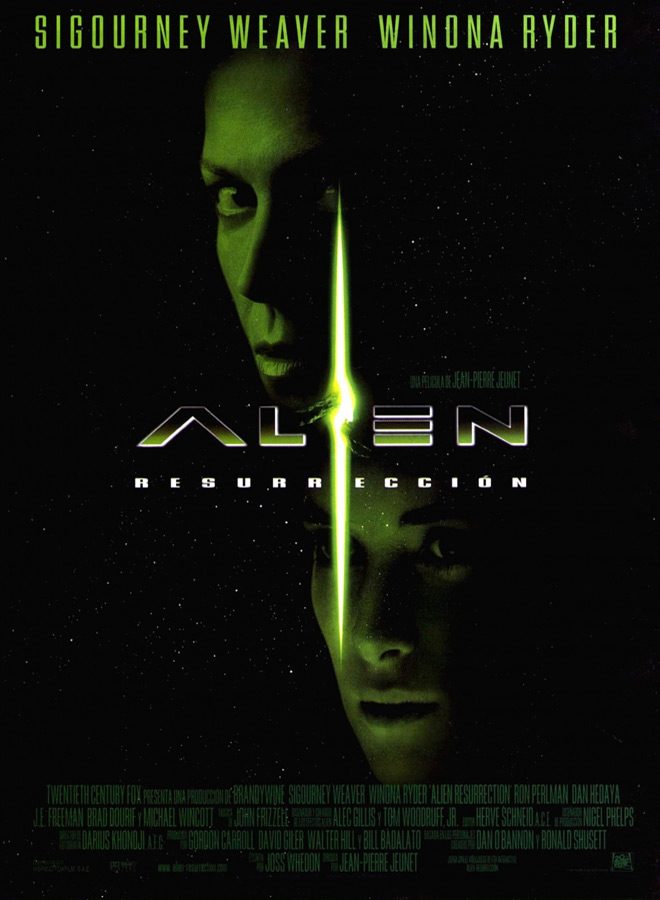