Following up on the success of 2013’s Horror film All Hallows’ Eve, comes a new tale in the form of All Hallows’ Eve 2. Again in anthology style, the latest installment’s wraparound segment was written and directed by Jesse Baget (Mischief Night 2013, Frankenstein vs. The Mummy 2015), and released on DVD and VOD as of February 2nd via RLJ Entertainment. 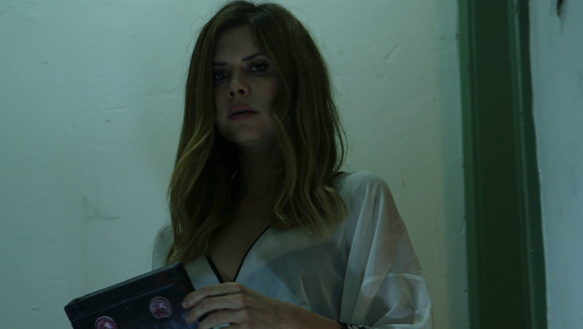 The movie starts with a young woman (Andrea Monier: Death Connection 2013, The Black Water Vampire 2014) sitting at home on Halloween, waiting for a guy to call her. After using a Ouija board to obtain dating advice, she speaks to her friend instead, the call interrupted by a knock at the door. Someone left a packaged video tape on her door step, she decides to watch it. A man wearing a pumpkin mask watches her outside.

The first story, Jack Attack, directed by Antonio Padovan (Once Upon a Time, Inc. 2013) and Bryan Norton (Seven Hells 2014), focuses on a babysitter Elizabeth (Helen Rogers: Block 2011, Body 2015) and her young ward for Halloween, Jack (Tyler Rossell: Jack Attack 2013, Seven Hells 2014). On their way back to Jack’s parents house, they discuss the jack-o-lantern they will make. Once inside, they begin carving the pumpkin, scooping out it is insides, and baking the seeds. After the seeds are cooked, Elizabeth and Jack start eating them. Shortly thereafter, Jack chokes on a seed, what occurs next could not be foreseen by either of them. It is time for pumpkin’s revenge. A clever, frightful tale, with plenty of twists and turns.

Next, The Last Halloween, directed by Marc Roussel, follows with secretive couple Kate (Emily Alatlo: Fortune Cookie Prophecies 2010, The Last Halloween 2013) and Jack (Ron Bach: Remote 2010, The Elusive Man 2010), who hide from society due to an unusual illness. They receive a knock on the door, Kate answers it. It is a bunch of kids dressed in Halloween costumes collecting for Trick of Treat. Among them, a Ghost (Ali Adatia: Ruby Skye P.I.: The Spam Scam 2010, Bronson Goodyear, Background Professional 2014), Little Grim Reaper (Alastair Forbes: My Ex-Ex 2014, Sunnyside 2015), a little Witch (Zoe Fraser: Wibbly Pig 2009, Bark Ranger 2015), and a little Devil (Brendan Heard: Sunday’s at Tiffany’s 2010, I, Martin Short, Goes Home 2012). The kids ask for treats, Kate wants to given them some, Jack shuts the door in their face. They go back inside, strange noises erupt from within the house. The kids from the front have transformed into the costumes, Kate and Jack’s deepest fears are revealed. A truly insightful story, a real heart-pumper. 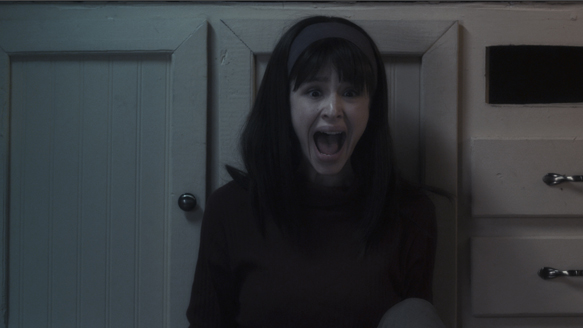 Following is Ryan Patch (If I Give My Soul 2014) directed The Offering, which sees two men, father (Bob Jaffe: Underdog 2007, Water Dogs 2014), and son (Jared Mark Smith: Tracks 2010, Missed Connections Live 2010), who are on their way to the woods to complete an ancient ritual. At certain times, they are required to make a blood sacrifice to a mystical creature. Along the way, they realize they forgot the sacrifice. Aware of the implications of such an oversight, they both plot and plan the rest of the trip on how they will complete the ritual. The sacrifice does not go as planned for either father or son. A chilly tale of family betrayal, and the desire to live.

Next up is Descent, directed by Jay Holben (Jack Frost 1997, Descent 2004), and it is about a young woman named Andrea (April Adamson: Descent 2004, Mindgame 2005) who visits her friend Vanessa (Renee Intlekofer: Buddy 2002, Descent 2004), who moments before was brutally murdered. Andrea hears the killer (Robert McLaughlin: Descent 2004), still in the apartment. He receives a phone call, Andrea hears his distinctive ring tone, and manages to escape. The incident left her deeply affected, and on constant alert. One day she is trapped in an elevator (Steven Bordelon: Dead Man Walking 2010, Salvador 2011), his phone rings. Andrea realizes it is the man who killed Vanessa, and panics. Vanessa is forced to fight for her life with deadly consequences.

Moving right along, M is for Masochist is directed by James Kondelik (Airplane Vs. Volcano 2014, Age of Tomorrow 2014) and Jon Kondelik (Golden Winter 2012, Airplane Vs. Volcano 2014). This segment is about Rick (Reno Selmser: K Citzen 2010, Lility & the Woebringer 2011), Sade (Bill Oberst Jr: Scary or Die 2012, Criminal Minds series), and Sam (Finn Kobler: Eric Finley: Comment Counselor 2012, Trophy Wife 2013), who go looking for some different fun in an amusement park. They encounter terrifying creatures such as Fat Pat (Zion Healy: Deadtime Stories 2013) and the Masochist (Jonathan Nation: 2012 Doomsday 2008, Mega Shark vs Giant Octopus 2009), who takes his name seriously, among others. What the boys find is something far removed than they expected, and may not make it out alive.

Directed by Elias Benavidez, A Boy’s Life tells the story of a young boy (Griffin Gluck: Just go with It 2011, Batman vs Robin 2015) who is terrified of a monster under his bed. His mother, Lorraine (Christie Lynn Smith: Grace 2006, The Crazies 2010), tries everything she can think of to convince him monsters are not real, however, it does not go the way she planned.

Mike Kochansky’s (Souldrop 2011) Mr. Tricker’s Treat is the penultimate segment. Here, a man, Donnie (Patrick Logothetti: Thicker than Water 2010), is gagged and bound in a cage. Mr. Tricker (Michael Serrato: Hollywood 2015, Looney Tunes: Rabbits Run 2015) rips Donnie from the cage and proceeds to make him one of his Halloween decorations. This delights one of his younger neighbors, a clueless woman, Monica (Carrie Seim: 7 Deadly Hollywood Sins 2006, Inside Amy Schumer 2013), who looks forward to his realistic decorations each year. Mr. Trickster finishes off the series with a slash. A further scene is included thereafter involving the woman from the start, the video, and, of course, The Trickster himself. Another version of Mr. Tricker’s Treat is shown in the film, which includes an alternate ending by the producers. 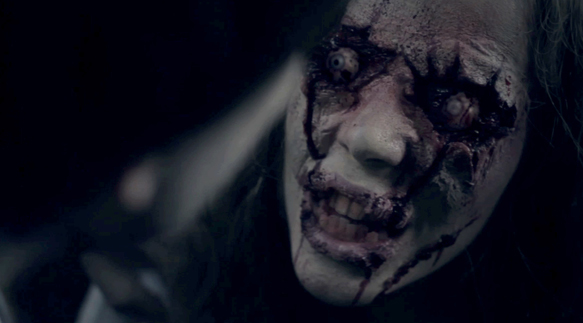 The final tale of the anthology is a Spanish piece titled Alexia from Andrés Borghi (Bailando con el peligro 2004, Otakus 2007). In this story, a young man (Sergio Beron: Accion de Policias 2012, Nacido para morir 2014) is stalking his late ex-girlfriends social media page. Sadly, he cannot let go of her until one of his friends talks him into it. Reluctantly, he un-friends Alexia, and she is not at all happy about it. As a result, Alexia makes her presence known and soon he regrets his decision as things unravel. Closing out All Hallows’ Eve 2 with a bang, Alexia is tight, impactful, and perhaps the best of all.

Overall, the production on All Hallows’ Eve 2 was a collaborative effort, and they work incredibly well together. This is a must watch at any time of year for all Horror fans, and this team are one to keep an eye out for. CrypticRock gives All Hallows’ Eve 2 5 out of 5 stars. 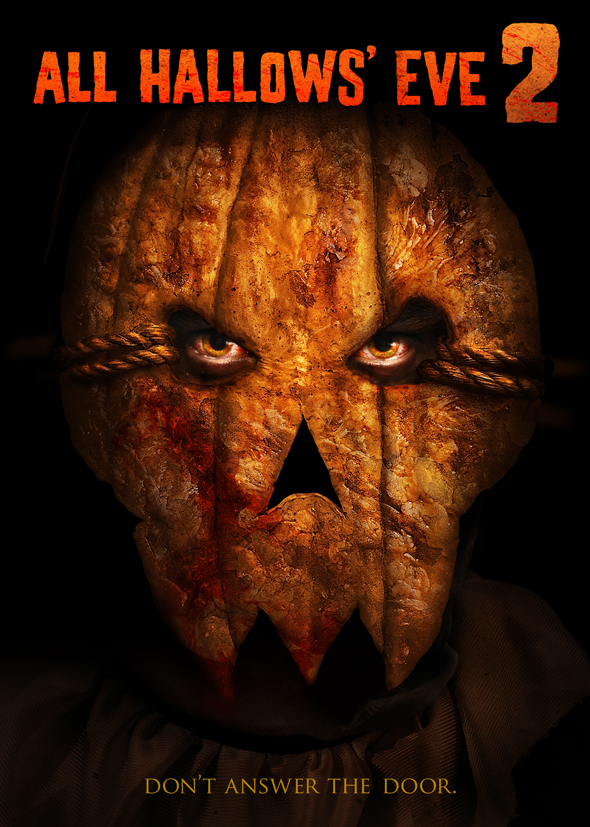 Purchase All Hallows’ Eve 2 on DVD on Amazon