All Time Low, Man Overboard, and Handguns Sellout Starland Ballroom on “A Love Like Tour” 5-2-14 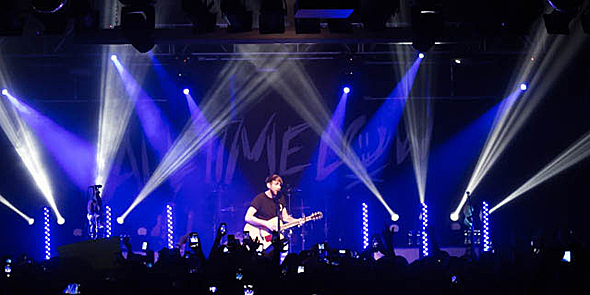 By 6:30 P.M. on a Friday May 2nd, the crowd outside Starland Ballroom was anxious to get inside for the “A Love Like Tour” featuring All Time Low, Man Overboard, and Handguns. Fans began lining up early in the afternoon, some arriving as early as 2:00 P.M., read to pack out the 2,500 capacity venue.  This would also mark the  sixth consecutive sold out show for All Time Low at Starland Ballroom. However, this successful turn out is not only due to the popular All Time Low. The rising fame of Man Overboard contributed to the rush of sold tickets from pop punk fanatics as well as the popularity of  Handguns.

The first band to hop on stage was Handguns. Although their entrance riled up the crowd with pre-concert adrenaline, it was clear that this band was new to a lot of the audience’s ears. Nevertheless, they managed to eagerly entertain the spirited crowd. Both the audience and the band remained engaged in the set; some people may not have known the words to their songs, but everyone in the pit was jumping and crowd surfing to their fun pop punk sound. They played tracks off their full-length record Angst, but threw in a single “Heart vs. Head” from their upcoming album , which was an exhilarating live song that definitely swayed the audience into finding interest in their sound. In between songs, the lead singer continuously cracked jokes and thanked the crowd for their energetic reaction to their performance. Handguns warmed up the crowd quite well for the anticipated next set, Man Overboard.

Over the past couple years Man Overboard have successfully made their presence known in the pop punk scene with their classic sound and catchy hooks. From the second they started playing their first song, the initial reaction from the crowd was overwhelming. Throughout the set, fans were moshing, jumping, shouting lyrics back at the band, and mirroring their energetic attitude. The catchy beats of “Dead End Dreams” and “Montrose” filled the venue with simultaneous claps and hand gestures to the rhythm while “Where I Left You” triggered explosive energy from the crowd. It was fun to see how engaged the audience was for a band that was not the headlining act. Any observer could see the joy the fans were feeling as they experienced Man Overboard.  The overall energy exerted from the crowd and solid performances by both Handguns and Man Overboard  led up to All Time Low who were ready to rock another unforgettable show at Starland Ballroom.

The overwhelming audience reaction was delivered even stronger as All Time Low stepped onto the stage. As they started their set with “Do You Want Me (Dead)?”, a melodious outburst of female fans singing along consumed Starland Ballroom. The band’s energetic manner matched their enthusiastic followers reactions, gaining momentum with each note. The crowd boomed with exhilaration for classics like “Stella” and “Break Your Little Heart.” In between songs, the reckless foursome playfully made inappropriate jokes and lead guitarist Jack Barakat ran around the stage with a bra on his head; one from his collection that piled on the stage in front of him. All Time Low created a rambunctious and amusing atmosphere that made fun songs like “Lost in Stereo” and “Guts” stand out when being played live. If this insanely adrenaline driven crowd had not made themselves clear just yet, vocalist Alex Gaskarth acknowledged them himself stating this was the craziest show on the tour.

Adding to the already entertaining performance, All Time Low threw in random musical covers for comedic effect. They joked around with the chorus of “You Give Love A Bad Name” by Bon Jovi and even made up their own rendition of LMFAO’s “Shots” but, instead, repetitively shouted “SQUATS!”.  This goofy behavior was tremendously entertaining for the crowd, something the band has excelled in. They took their tributes more seriously, however, when covering both “My Own Worst Enemy” by Lit and “All The Small Things” by Blink 182. This left classic pop punk fans floored by the pleasant surprises.

Before concluding their set with “Time Bomb”, All Time Low brought six random fans up on stage to sing with them, making for one of the highlights of the entire night. The fans on stage went wild with the rest of the band singing every word, jumped on the amps, and high fiving every crowd surfer to pass them. The overwhelming joy from those lucky fans on stage made everyone else in the audience feel the same way, portraying the lively epitome of New Jersey’s passionate crowd.

After hearing fervent chants of “One more song!” from the audience, All Time Low conquered the stage once more, playing all of the crowd favorites. Playing through “The Reckless and the Brave” and “A Love Like War”, fans gave it all they had until the very last song, crowd surfing and moshing. Like always, the band ended their performance with their closing anthem “Dear Maria, Count Me In.”

From the very first act to the last, New Jersey failed to disappoint with their exuberant stamina and energy during every minute of the show. The crowd’s emotion was the most exciting part of the concert, derived from the thrill of each band’s performance. This was an unforgettable concert and Starland Ballroom was vigorously brought to life by the pop punk spirit of “A Love Like Tour”.