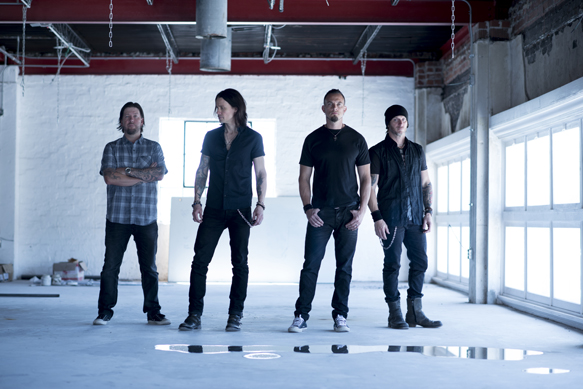 In 2004, Alter Bridge was birthed following internal tensions between members of multi-platinum Hard Rock band Creed. A fresh start for Guitarist/Vocalist Mark Tremonti, Drummer Scott Phillips, as well as Bassist Brian Marshall, creative focuses turned in the right direction and the creative juices were flowing again. Recruiting former The Mayfield Four Vocalist Myles Kennedy, Alter Bridge was well on their way to forming their own identity. Debuting with One Day Remains in 2004, Alter Bridge has attained one top-selling album after another all the way through 2013’s Fortress.

Touring heavily and squashing the preconceived notion that Alter Bridge was just Creed with a different singer, their identity has been forged as melodic Hard Rock, and an often quite heavy band. So where does that lead this forever busy group of musicians? It leads them to present day where they are set to return with fifth studio album, The Last Hero. Set for release on October 7, 2016, it marks the first release on their own imprint label with distribution via Napalm Records. While some aspects have changed on the business end, in the studio, Alter Bridge invited back long-time Producer Michael “Elvis” Baskette to the follow. Now, dedicated Alter Bridge fans anxiously await to hear the mix of new music.

Thirteen tracks in total on the standard edition, The Last Hero launches with ringing guitars and a slightly curious, yet ominous feeling on single “Show Me A Leader.” Quite a tension builder, it breaks into heavier tones to match the challenging message. Then, with a bell tolling, “The Writing on the Wall” pulls to the darker side of matters, mixes in warnings, as well as a little attitude with consequence. Cutting the tension, “The Other Side” eases in with gentle chorus of vocals before diving into heavy guitars. The drum work of Phillips features stomping echo-like effect while mellow singing only serves to deepen the contemplative vibe of the song.

Thereafter, “My Champion” pulls inspiration from a more classic sound as a carefree beat is laid down before high vocals offer up hope and advice. Then, ramping up the energy once more, “Poison In Your Veins” returns to a muscled beat as deep questions push out  through the words. That in mind, the track is contiguous and no doubt steering wheel drum kit material. Making use of gentler elements within the introduction, “Cradle to the Grave” quickly fades into a weighty sound while acoustic guitars serve to add a small contrast to the track. Furthermore, emotional vocals with a hint of melancholy, clearly come from the heart.

Showing diversity, “Losing Patience” is introduced with a spacey sound effect. Rolling into gritter textures, the lyrics illustrate a story about moving on, change, and a second chance, all colored by the upbeat mood set by instrumentation. Seemingly continuing on the heavier end, “This Side of Fate” quickly alters the pace with soft singing and guitar work. Shifting back and forth, the beat emphasizes key parts of the tone, giving off a sinking realization feeling. This acts almost as a prelude to “You Will Be Remembered,” which features twinkling guitars and soulful sound, taking on a nostalgic vibe. Kicking in fully, one can almost imagine trees flying past the car just before sunset, breathtaking in every sense.

Driven by guitars, “Crows on a Wire” presents high-pitched vocals that come back for a fatal sounding effect. Possibly speaking on the consequences of fame, the track offers up a serious warning. This is before “Twilight” takes on an easier tone with easy-going instrumentals as the lyrics offer a more somber picture. This leads toward the final moments of The Last Hero’s journey as “Island of Fools” carries a foreboding intro that blasts into thunderous guitars reminiscent of Thrash Metal of yesteryear. With Kennedy’s vocals, the track feels like time is running out for the subject matter at hand. That said, title-track, “The Last Hero,” ends the album with gritty guitars and haunting vocals while sending out a desperate plea for a beacon of light in the darkened path the world faces.

Overall, The Last Hero is a solid Rock album that shows off the bands’ vast range of talent. Vocally, Kennedy’s inflection gives depth in all the right places, and not much else is needed in that aspect. Alter Bridge does not just stick to heavy and hard-hitting Rock beats, they also add different elements within the tracks to make them stand out, resulting in a very well done album. Above all, The Last Hero is a concept album, one with purpose much more than just  faceless Rock lyrics, there is a message to be heard. For these reasons, CrypticRock gives this album 4.5 out of 5 stars. 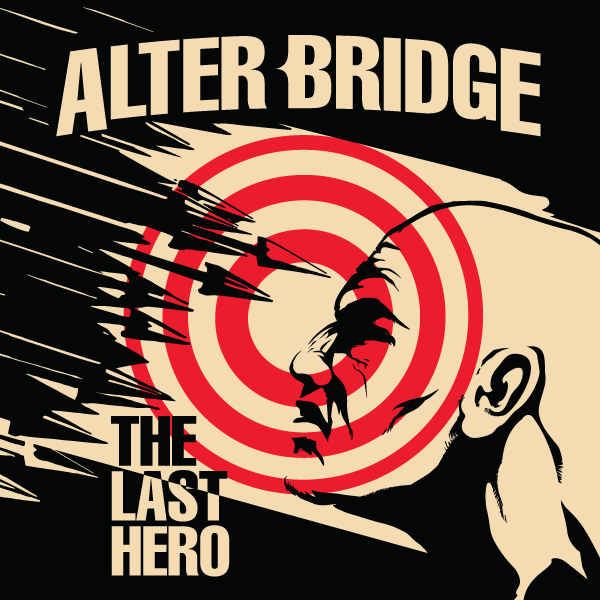