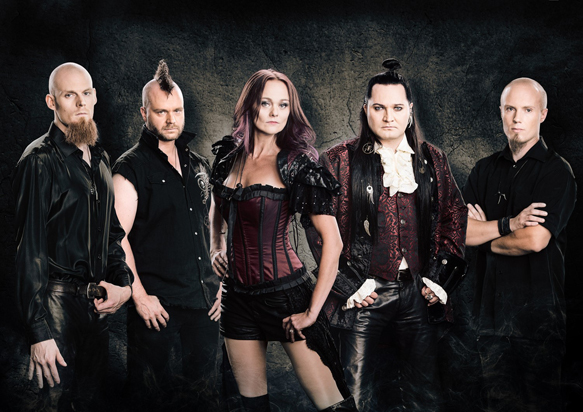 Hitting the music scene in 2008 with their particular, melodic style, Amberian Dawn has quickly established themselves in the Symphonic Metal scene. Hailing from Finland, Amberian Dawn explores the technical possibilities of Symphonic Metal. Akin to other bands within the genre, such as Nightwish or Leaves’ Eyes, some of the songs and albums by Amberian Dawn tell a story; some of which is inspired or based in Finnish or Norse myths and legends.

Before Amberian Dawn, several of the band members were originally a part of the band Virtuocity. Upon the bands split, Tuomas Seppälä and the members formed Atheme One in 2006 and released a demo. When Heidi Parviainen, formerly of Iconofear, joined them as vocalist and lyricist in 2006, Amberian Dawn was born. With Heidi on vocals, several of their Atheme One songs were remade for the new band. Amberian Dawn’s debut album was River of Tuoni (2008) under KHY Suomen Musiikki. The album was released in the beginning of the year and met with great success, hitting the charts, notably with the song “River of Tuoni.” The following year, they released The Clouds of Northland Thunder (2009). Those familiar with Finnish poetry would appreciate the song “Kokko- Eagle of Fire,” referencing the Finnish national poem, Kalevala. Their third album, End of Eden (2010) was released under Spinefarm Records. In this album, they explored more of their range and style.

The Circus Black record in 2012 was different in that it was a concept album and also saw changes in the lineup as Heidi, Heikki Saari (drums), and Kasperi Heikkinen (guitar) left the group. Päivi “Capri” Virkkunen joined as vocalist and lyricist. Joining as well were former band members, Joonas Pykälä-aho on drums, and Emil Pohjalainen on guitar. In 2014, Amberian Dawn signed on with Napalm Records and released 2014’s Magic Forest. This would be Capri’s first studio album with the band. Jukka Hoffren brings his talents on bass to the band shortly thereafter.

In their latest album, Innuendo, released via Napalm Records October 23rd, Amberian Dawn’s technical skills really shine. The whole album tells a story, and maintains its momentum throughout most of it, switching up or down during dramatic moments. “Fame & Gloria” starts off the album with Joonas Pykälä-aho’s rapid-fire drums and high tempo guitar riffs by Emil Pohjalainen. No slow build up, the steady rhythm of Jukka Hoffren’s bass and Tuomas Seppälä talented keyboards throws the listener right into the powerful emotions of the song. Capri’s clear and powerful vocals coupled with amazing lyrics make this song really set the stage for the rest of the album.

“Ladyhawk” continues with the upbeat tempo and beautiful lyrics. Seppälä’s composition of this song is amazing, and Capri really brings the song to life with her fresh and passionate vocals. Her vocals fade off as Pohjalainen kicks off with a powerfully intricate guitar play. Again, the whole band really comes together and there is a sense of a building momentum. Seppälä and Pykälä-aho pick things up in “Innuendo,” paving the way for Hoffren and Pohjalainen’s Metal guitar and bass. Pykälä-aho’s galloping drums really sets the pace for the music for this song, which often runs in contrast to the pace Capri sets with her vocals. There is a building tension in the music, resulting in a dramatic and energetic sound that stimulates the senses. Seppälä’s keyboards really come to the fore in “The Court of the Mirror Hall.” This song features great lyrics and imagery as the tone and story of the album changes.

Seppälä begins “Angelique” with an eerie, secondary-scene feel expressed through his keyboard. If the album was an Opera or Musical, this song would be used in the scene of a central character’s aria or soliloquy. Capri’s vocal range becomes evident throughout this beautifully composed and written ballad. Pykälä-aho rapid-fire drums returns to kick things back up in “Rise of the Evil.” Backed by Pohjalainen’s heavy guitars and Hoffren’s bass in this climactic piece, Capri’s melodic vocals and lyrics present a sense of loss and desire for revenge.

“Chamber of Dreadful Dreams” is a highly charged piece, presenting a sense of taking control of one’s fate. Again, Pohjalainen cuts loose with an amazing guitar riff. The song has a very symphonic sound to it, while Capri takes on a bitter aspect in her vocals. “Knock Knock Who’s There” is a very upbeat and Pop-Metal sounding song. One can detect ABBA’s influence in this piece amidst the power Metal guitar and drums. There is a feeling of sense of hope and urgency in this piece.

The music and story takes a different turn in “Symphony Nr 1, Pt. 1 – The Witchcraft.” It is likely the most complex and interesting piece in the album. Here, the band explores the depths of Symphonic Power Metal. The band really displays their musical range and technical skills in this song, as each member has an opportunity to bring their individual talents to the forefront. The tempo switches a few times throughout this song, which is also the longest song in the album. The overall composition to this piece is amazing. “Your Time – My Time” closes the album with the style for which Amberian Dawn is known: an excellent fusion of Symphonic melodies and Power Metal supporting melodic vocals.

Amberian Dawn’s Innuendo envelopes the listener in a sweeping story with dramatic and powerful music. With ten tracks at approximately forty-four minutes, Amberian Dawn presents a rather singular piece that is both image-invoking and passionate; bringing their particular style of Symphonic Power Metal to bear. Many have often compared Amberian Dawn’s sound or style to other Symphonic Metal bands, such as Nightwish. However, Amberian Dawn brings a unique style to the Symphonic Metal genre. They have established themselves as a Symphonic Power Metal band with complex lyrics and guitars. With both Tuomas Seppälä as the songwriter and Capri Virkkunen writing the lyrics, Amberian Dawn delivers songs featuring intricate music with complex lyrics. Innuendo is a complex and technical composition of talented music and finely-written, moving lyrics. CrypticRock gives Innuendo 4.5 out of 5 stars. 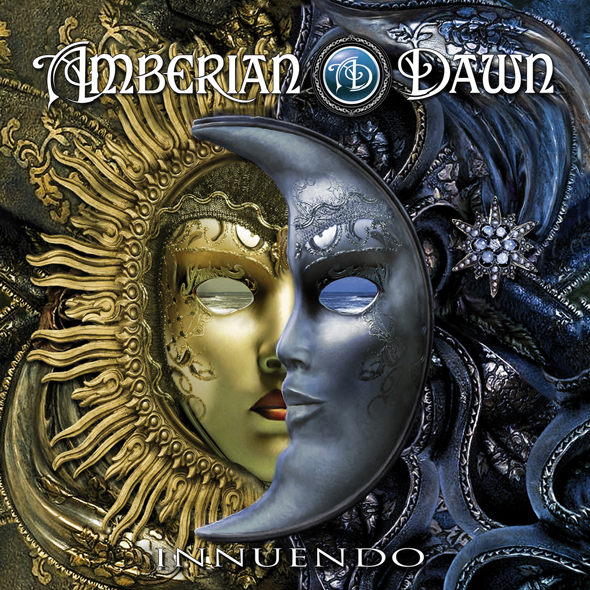 You Me At Six – Suckapunch (Album Review) Accept – Too Mean To Die (Album Review)
Like the in-depth, diverse coverage of Cryptic Rock? Help us in support to keep the magazine going strong for years to come with a small donation.