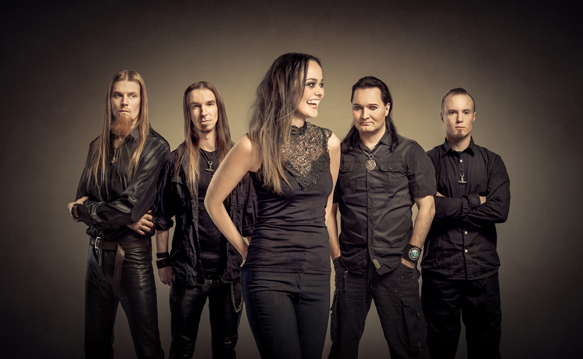 In the summer of 2006, the melodic symphonic power metal band from Hyvinkää, Finland Amberian Dawn rose from the ashes of Tuomas Seppälä and Tommi Kuri former band Virtuocity.  Reaching new heights of success with their new endeavor, the band has toured all over Europe numerous times and built a sizable discography in a short period.  Like many others the band has weathered lineup changes.  Perhaps the biggest changes came prior to the release of their fifth studio album Re-Evolution (2013) when the band added new vocalist Päivi “Capri” Virkkunen to replace Heidi Parviainen and returning drummer Joonas Pykälä-aho to replace Heikki “Joey Edith” Saari.  With the band all on the same page in 2014, Amberian Dawn now looks to build on their sound  with their new second full-length album Magic Forest via Napalm Records.

The album begins on a positive note with the catchy song “Cherish My Memory”. Capri’s history as a pop vocalist prior to joining Amberian Dawn is still easily heard throughout the album and her voice brings a nice softness to the heavy instrumentals. On “Dance of Life“ the band takes  a leap to speed metal with a rhythmic and fast tempo.  The track also features guest keyboardist Jens Johansson of Finnish power metal band Stratovarius. With the title track the sound lends itself to a nice medieval-like spirit with a very catchy and energetic chorus.

Mixing in more traditional metal tones are the powerful “Agonizing Night” and dramatic “Warning“.  Deriving influences from Stratovarius’ Son of Rainbow’s”  epic sound brings out the beautiful and diverse vocals of Capri’s voice.  Relaxing the atmosphere a bit is the calmer “I’m Still Here” with a more melancholic style than other tracks on the album.  Wonderfully preventing their sound from becoming monotonous “Memorial”  comes at listeners with a classic male voice emphasizing deep lyrics.  Showcasing the impeccable accelerated drumming of Pykälä-aho,  “Endless Silence” is yet another very catchy sound complemented by Capri’s voice. Which leads into the final track titled “Green-Eyed“ which is a symphonic soundtrack-like piece with calm, but dramatic and serene textures; it is a peaceful way to end this fast tempo album.

Amberian Dawn has started a new phase in the life line of their band.  Capri’s past professional singing experience does clearly reflect and makes Amberian Dawn’s music a little bit softer, popish, and more accessible.  Her voice is undoubtedly unique among the metal scene and that  also makes Amberian Dawn’s music stand out. The album Magic Forest is fresh and compelling offering with intense, rhythmic, enchanting music suitable for both pop and metal fans. CrypticRock gives Magic Forest 4 out of 5 stars. 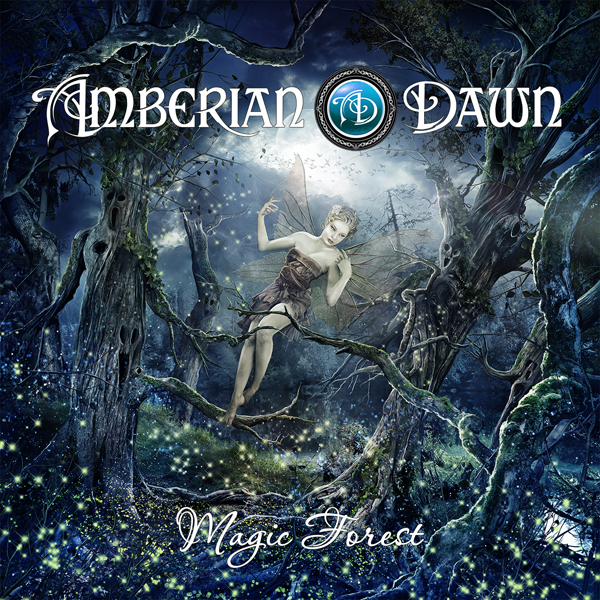