Welcome to American Burger, where a piece of America is in each burger – literally. A bus load of American students are joined by their teachers on a summer holiday trip overseas. The kids are all excited as they stop at the next place on their trip for lunch; American Burger. They are met in the middle of the road by a strange food vendor, who hands them all big fat American burgers and shows them how to get to the factory. Not long after their arrival they meet a strange butcher/chef also known as the Demented Chef (Fredrik Hiller: Beowulf 2007, The Bridge 2013), who seems to be in charge of the place. After a few theatrics, possible Tourettes, and sizing them all up, he advises them that they will be collected shortly. This starts the story of American Burger, the latest Horror Comedy released by Little Big Productions on October 17th. Written by Martin Wrench (Bad Company 2010, What If, Like Me 2012), Johan Bromander (Sad Clown 2002, Shaken Not Stirred 2006), and Bonita Drake (Sad Clown 2002, Shaken Not Stirred 2006), the former two also co-direct. American Burger is not a film to take seriously, as none of the characters have actual names except for one, that being Wonky Eyes Nerd aka Mike, and all the characters playing Americans are predominantly not American.

After the demented Chef returns into the large warehouse, a gang of men dressed in plastic coats, hats, visors, boots, and pushing wheel barrows starts to rapidly approach the school group. Out of nowhere the group is slaughtered one by one, and those that aren’t killed straight away run and hide. Fat Nerd (Liam MacDonald: I am Cursed 2014, Brash Young Turks 2015), Preppy Nerd (Benjamin Brook: BBC Proms 2010, The Laurence Olivier Awards 2011), Camera Nerd (Charlie Petersson: The Circle 2015) and Wonky Eyes Nerd (Ben Thorton: Reign of Fire 2002, Pollyanna 2003) join together with Pony-tail Cheerleader (Hanna Nygren: Kollikallion skidit 2005), to fight and hide. Their teacher (Lena Bengston), known as ‘Teacher 1’ runs as fast as her legs will go assuring the students following her that they will be safe. Quarterback (Gabriel Frelilich: Dark Shadows 2012, Key and Peele 2013), Nice Cheerleader (Aggy Ness Kukawka: World War Z 2013, The Hunted 2014), Adorable Cheerleader (Madeline Borg: Like Me 2014), Jock (Hjalmar Strid) also initially join forces. Each group is thrust apart and new groups form from the ensuing chaos. 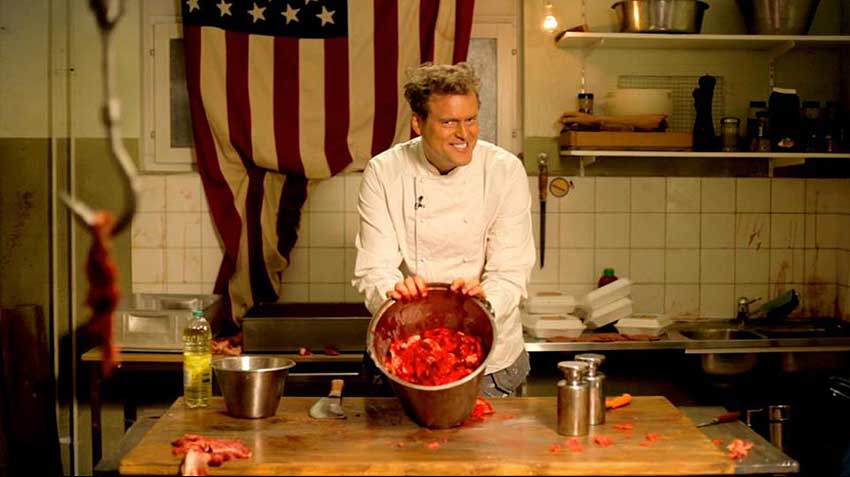 Unlikely heroes, friendships and survivors appear, as each person is pushed to their limits as they run and hide to survive the massive blood bath. It becomes clear very quickly that they have not paid attention to what they have been told, and American Burger is exactly what its name suggests. American Burger is not an original concept, as it does in fact contain quite a number of cliches. However, it is a quirky movie with quite a few genuinely funny moments. It is not entirely clear if the film is making fun of what Europeans consider to be ‘typical Americans’ or if it is just their version of a horror comedy. Either way, the characters are light and fluffy and it is easy viewing. 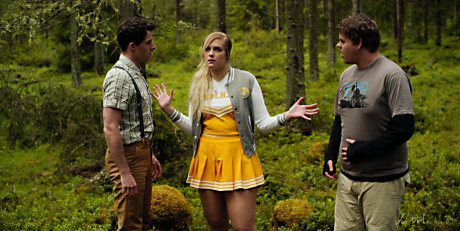 Not all the story line of American Burger makes sense, but it really does not need to in this case, as its purely for fun. Filmed in Sweden, the scenery around the massive amounts of blood and gore is quite picturesque, but it does not bode well in relation to school tourists visiting Europe and never returning. American Burger is worth watching, especially for those who want to have the best summer holiday ever, particularly for the younger adult viewer. CrypticRock gives American Burger 3 out of 5. 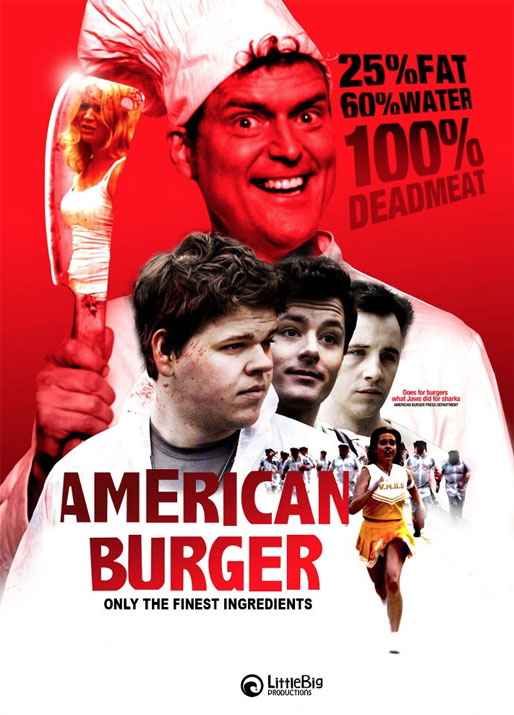