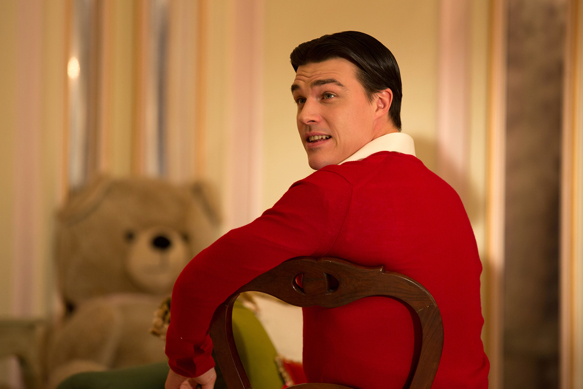 The episode opens with Gloria Mott on a psychiatrist’s couch, discussing her plight with Dandy. She speaks in the detached and dissociative manner of one who has either been heavily drugged or who has experienced great trauma, her emotional state revealed only in her compulsive smoking. Frances Conroy’s acting here is strong, and it remains so throughout each scene in which she appears, all the way up until the episode’s dramatic conclusion. One cannot help but feel sorry for Gloria, but not to such an extent that her behavior is excused. Gloria Mott is evil, but is a languid kind of evil, rooted in her complicity and willingness to cover her monstrous son’s tracks. This is illustrated in this episode in her behavior when Regina, erstwhile playmate of Andy and daughter of the late housekeeper Dora, arrives looking for her mother. However, on some level, Gloria’s actions are understandable, and her plotline forces one to consider the lengths to which she might go, were she in Gloria Mott’s shoes, to protect the person she loved the most. Gloria, with her complex mingling of desperation and cruelty, material wealth and emotional dearth, is one of the most interesting characters in the show. 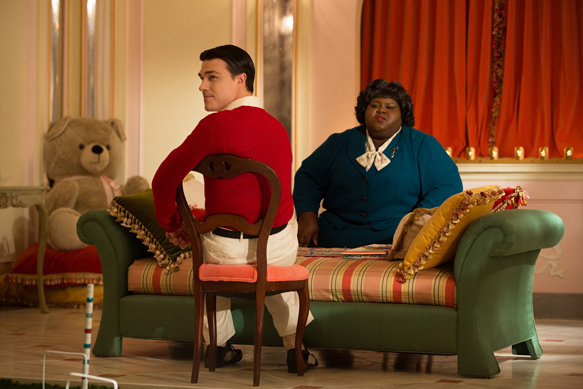 Continuing with the mother theme, another conflict in this episode involves Ethel and Elsa. After Elsa expresses heartfelt grief at the untimely demise of her cuddly human hot water bottle (see episode six), Ethel suspects the reaction is insincere.  Fueled by liquor and with gun in hand, Ethel, angry about Elsa’s recent actions involving the twins, rails at Elsa for her use of manipulative tactics to draw vulnerable people into the fold of freaks. Elsa contends that she is both savior and mother-figure to her flock, but Ethel is unconvinced. The two women take turns expressing hurt, rage, and feelings of betrayal until Ethel shoots Elsa in the leg. Exposed, Elsa has inadvertently revealed her darkest secret to Ethel, whose rage softens – but only for a moment. Just when it looks like the revelation will repair the broken friendship, the violence escalates, satisfying the episode title’s promise of bloodshed.

This episode also revisits Penny’s story, and the manner in which the women of the freakshow console her, along with their desire to avenge her, is also reminiscent of a mother’s protective instincts. Penny seems vaguely uncomfortable as the women tie ropes and boil tar, but she joins the women when they pay a visit to her former home anyway and kidnap her father. Plans change when they are about to exact their revenge, however, when Maggie appears on the scene and pleads with the women not to taint their goodness — and Maggie is right. Even though the scene would have offered some impressive horror had the women not stopped, with so few likable characters at the center of the plot, it would have been a shame to see the more principled characters tarnish their goodness in stooping to the level of someone as vile as Penny’s father.

The final nod to motherhood relates to new character Barbara (Chrissy Metz) whom Elsa has recruited to be the new “fat lady.” Barbara is not a mother, but at one point, when Jimmy expresses his disgust with Elsa and the business in general, Elsa alludes to the comfort that Jimmy might derive from Barbara’s ample bosom. By the end of the episode, Jimmy, drunk, bereaved, and needing something that Maggie cannot offer, does, indeed, rest his head against Barbara’s breasts to cry.

With at least two casualties (a third is implied, but the audience cannot be sure yet), Bloodbath does live up to its name, but the true and quite literal meaning of the title is not revealed until the very end of the episode. The scene in question is gruesome, and it should be disturbing, but, like many episodes of American Horror Story, the horror does not quite translate, at times playing out more for comedic effect or simply for a clever punchline as in the case of Bloodbath.  To the show’s credit, the plot has begun to move a bit more, and as characters continue to die off, some of the more distracting — or boring — subplots might do the same. CrypticRock gives American Horror Story: Freakshow, Bloodbath, 3 out of 5 stars. 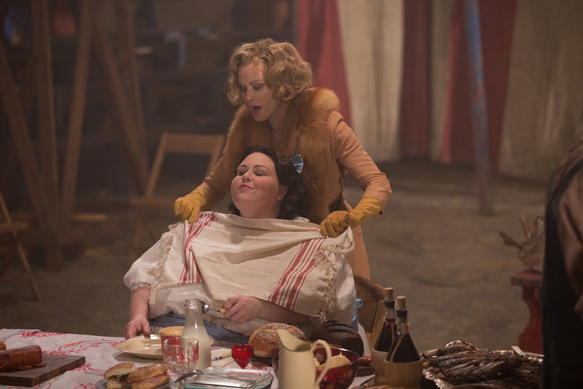 Tune in to FX Network on Wednesdays at 10 pm to see who dies next.