Episode 6 of American Horror Story: Freakshow, Bullseye, reveals the freakshow’s den mother’s dangerous relationship with the wheel of fortune, both in the literal sense and the figurative sense. Jessica Lange’s Elsa has proven to be both fragile and dangerous, just like her characters in the previous three seasons of American Horror Story. At first, it seemed like Lange might have had the opportunity this season to play a different role, still that of a fierce matriarch, but one who directed that ferocity only to those who deserved it. However, just like Constance, Jude, and Fiona, Elsa is selfish and narcissistic. In this season, Lange’s character is motivated by her insatiable desire for fame and adoration, much like Fiona Goode was motivated by a desire for youth and beauty. Each of Lange’s characters has been a manipulative beauty, exuding an old Hollywood glamour, her elegance belying the dark soul hiding beneath that flawless skin. Even Jude wore red lingerie underneath her habit. Although the cruel siren trope is appropriate for Lange, at this point of the show’s run, it is overdone. There is still time for Elsa to redeem herself, however, so perhaps the writers will surprise the audience. 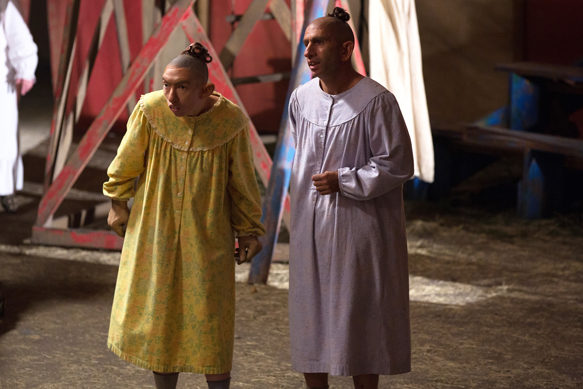 In Bullseye, it is Elsa’s birthday, but the celebratory mood is dampened by the performers’ worries about the disappearance of Bette and Dot. Elsa insists that they ran away, and she condemns them for their ingratitude, also chastising everyone else for ruining her birthday with their collective somber mood. She threatens to strap someone to the wheel of fortune which she has dug out of storage to include in her television act, and which now sits menacingly in the “big tent,” where the birthday celebration takes place.

Later, Elsa tops off her celebration with some sexual gratification offered by Paul, who takes on a central role in this episode. Once satisfied, she dismisses him, but not before demanding her “cuddle,” which, disturbingly, is Ma Petite, swaddled in a pink knit onesie. (For some reason, Ma Petite is characterized as being childlike and naive, frequently chirping about things like love and butterflies and ponies. This is a strange writing choice since the actress — and the character, as far as we know — is a grown woman. To reinforce the stereotype that little people are like children or cute little fairy-like beings seems to be at odds with the show’s overall message.)

Paul and Penny are not the only characters who have found an uneasy sort of love. Back at Mott Manor, the viewer learns that Dandy and Bette are quite enamored of one another, and that Dandy would like to marry her. Gloria of course disapproves, but Dandy is undeterred. Dot is not pleased, but when she learns of a recent surgery separating a pair of conjoined twins, she realizes that while she might not have much use for Dandy, she might have some use for his money. Given Dandy’s track record with the other playmates his mother has procured for him (or those he has procured for himself), his relationship with the twins is unexpectedly chaste and almost tender at times. As revealed later in the episode though, all good things come to an end.

At one point, the episode’s two lover-boys run into each other at the pharmacy. The scene is rife with tension, not only because the pharmacist treats Paul poorly, but also because Paul notices that Dandy is buying women’s toiletries — and two of each. A confrontation ensues, and Dandy is the victor simply for the fact that the discriminatory pharmacist takes his side. Paul, who is quite a likable character, by the way, maintains his dignity and leaves, but not before insulting the pharmacist with an oddly hilarious line about Woolworth’s. 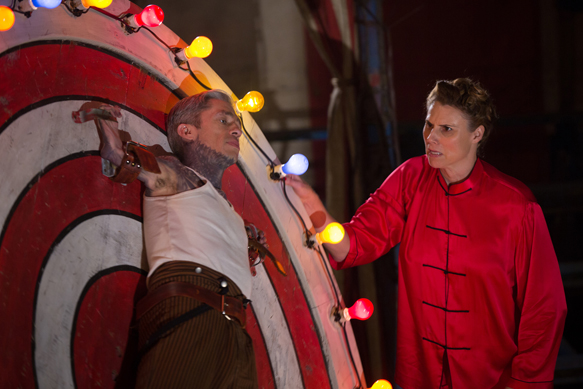 Knowing that the Motts once offered a decent chunk of change to Elsa for the twins’ purchase, Paul puts two and two together. He brings his suspicions up to Jimmy, but Jimmy is too naive to consider them, and instead he slaps Paul for disrespecting Elsa, whom he considers a savior to the freaks. In an interesting moment, Paul points out to Jimmy that, because of his passing privilege, he does not have a true understanding of the experience of the other freakshow performers whose oddities are impossible to conceal and are readily noticeable. When Paul later confronts Elsa, he suffers more than a mere slap to the face, and it is unclear what the outcome of his injuries will be.

Throughout all of this, the show’s resident fortune teller/scam artist is trying to figure out a means of avoiding her murderous partner’s demands. Of course, since Jimmy is the one she seems to have a romantic interest in, Jimmy is the one that Stanley has an interest in killing. Maggie is able to stall Stanley by suggesting something much more heinous involving Ma Petite, resulting in a rather distressing scene illustrating exactly what it is she has suggested. Maggie appears weak on the surface, but it is possible the writers are grooming her to be a heroine or perhaps a martyr. In any case, at this point, it does not look like Maggie will be killing any of the freakshow residents. Stanley, however, remains a threat, as do Dandy, Dell, hateful townspeople, Elsa herself, and perhaps, now, Penny’s father. It is now just a matter of time before someone gets hurt. The wheel of fortune has been set in motion. CrypticRock gives American Horror Story: Freakshow, episode 6, “Bullseye,” 3.5 out of 5 stars. 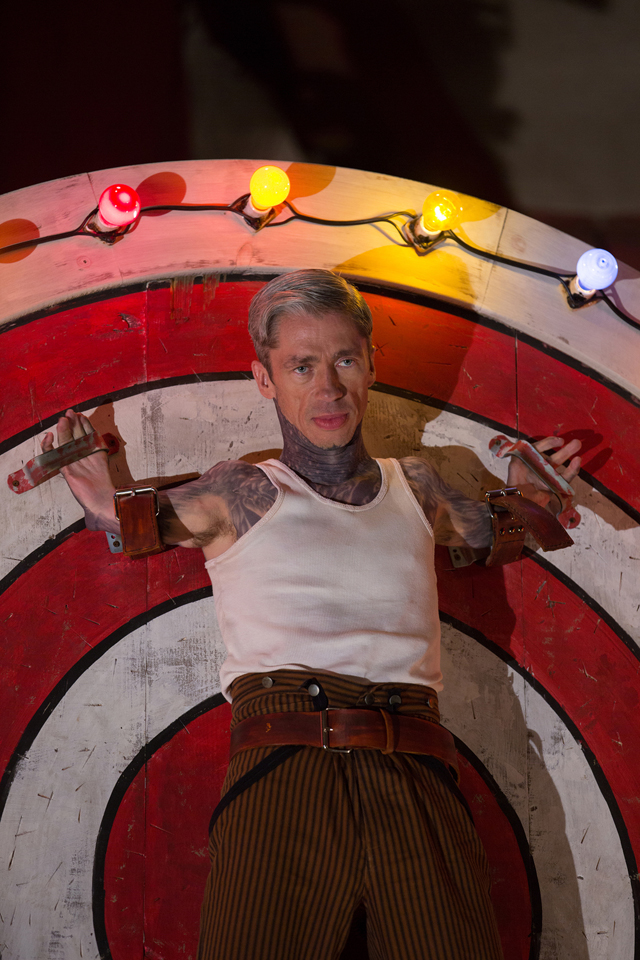 Tune in to the FX network November 19th at 9 pm to see what Dell is up to in episode 7, “Test of Strength.”