Coulrophobes should steer clear of the latest season of American Horror Story, which premiered on FX Network this Wednesday. Featuring the most sinister clown since Pennywise, Freak Show takes place in Jupiter, Florida. Breaking the American Horror Story tradition of heavy use of the flashback device, the plot so far is linear, taking place entirely in 1952.

Monsters Among us opens with the aftermath of the murder of a woman who has been killed in her remote farmhouse. The story focuses on the subsequent hospital treatment by curious doctors and squeamish nurses of the woman’s surviving offspring, also injured. It is in this context that the viewer meets the show’s first freaks, Bette and Dot, telepathic conjoined twins played by Sarah Paulson. 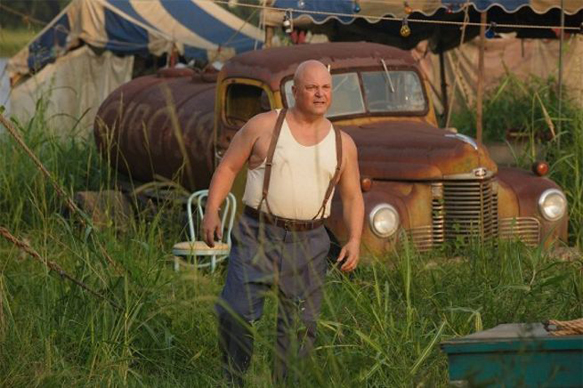 Invoking the belief that right and left are good and evil, respectively, Dot is the more virtuous twin. Somehow worldly in spite of the twins’ seclusion from society, Bette, with her lascivious commentary and fiery temper, torments her sister. Paulson’s acting in this role is exquisite. The script makes the differences between Bette and Dot obvious, but it’s Paulson, with her expressive countenance and mannerisms, who allows their individual personalities to manifest.

It is not long before Jessica Lange appears on the scene, confident, sophisticated, and buried in furs, looking a bit like Cruella de Vil. She speaks in a vague European accent, much like that of a cartoon villain, later revealed to be German. In this season she plays Elsa Mars, collector, connoisseur, and purveyor of freaks.

At first — and this is likely due to Lange’s antagonistic roles in previous American Horror Story seasons — it seems that Elsa has ill intentions when she persuades Bette and Dot to join her show. She makes promises of freedom and greatness, and she carries a mysterious satchel with a symmetrical design which echoes the shape of the twins’ body. The contents of this satchel are, as yet, unknown, but the viewer suspects there is something sinister inside. At this point, Elsa is reminiscent of the devil of yore, making promises with his fingers crossed behind his back, tempting vulnerable people into signing away their souls in his legendary “black book.” 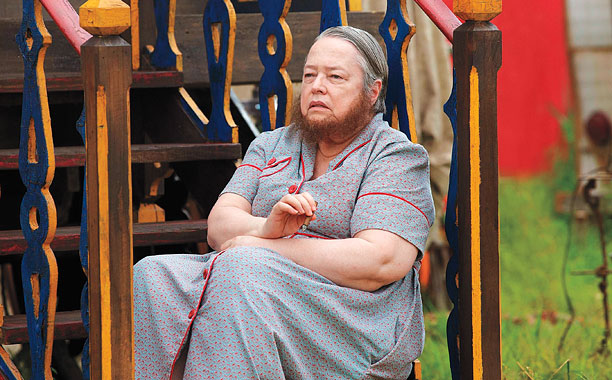 However, as the story progresses, it seems as if Elsa might be sincere in her desire to help. She is fiercely protective of her family of freaks, and she demonstrates a keen understanding of who the real monsters are in the world. Of course, exploiting people for extreme medical conditions over which they have no control might not seem like a benevolent act, but in 1952, when such people would otherwise have been relegated to an institution of some sort, this was a kindness. Elsa’s treatment of a local candy striper is also, at best, questionable, but the ensuing dialogue between the two allows Elsa to drive home the point about the true role of sideshow freaks in society.

By the end of the episode, the penultimate moment of which involves Elsa singing a bizarre rendition of David Bowie’s “Life on Mars,” Elsa exhibits a vulnerability previously unseen in any of Lange’s AHS characters so far. As the series continues, it will be interesting to see if she’s a hero, a villain, an antihero, or all of the above.

Along with cruel outsiders, the local police force, and Twisty, the murderous clown, it is Frances Conroy, who, despite appearing in all seasons of American Horror Story, will forever be known as the gentle Ruth from Six Feet Under, who appears to be the antagonist this season. She plays the role of Gloria Mott, wealthy mother to a spoiled son, Dandy (Finn Wittrock), who seems to have a rather unsavory interest in Elsa’s performers. Conroy is virtually unrecognizable in caked-on makeup, and Wittrock’s leering is appropriately grotesque. These two characters are far more disturbing than any of the freakshow performers.

The freakshow itself features the usual suspects. Kathy Bates plays the Bearded Lady, Ethel Darling, in a nurturing role distinctly different from her role as Delphine LaLaurie last season. Ethel’s son, Jimmy, is the Lobster Boy, played by Evan Peters who it appears will be reprising his role as love interest and putting his “claw” to good use. The Tiny Woman is played by Jyoti Amge, who at just over two feet tall, is actually the smallest woman in the world.

So far, Freak Show is successful. It is engaging, with multidimensional and original characters that are more likable than those who have appeared in previous seasons. Imagery is both colorful and dark, much like that of a real carnival sideshow. Use of sound is effective, with Nine Inch Nails influenced rhythms and tinny, old timey music creating a near-constant sense of foreboding and anxiety. Twisty provides the violence and gore necessary for the show to justify its moniker, while more subtle horrors encourage the viewer to consider the societal ills the show points out. 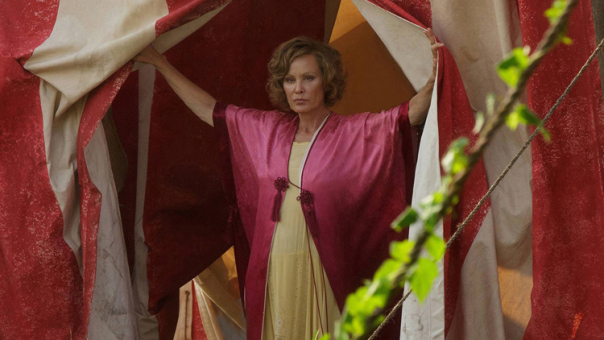 Elsa condemns the Jupiter residents who will not welcome into society the freaks in her “Cabinet of Curiosities,” but will spend substantial amounts of money to gawk at them from a safe distance and use them on their own terms. Ultimately, Freak Show reminds the audience in this first episode that, much like the small-minded townsfolk in the show, the real monsters in our world are people who mistreat those who are different. CrypticRock gives episode 1 of American Horror Story: Freak Show Monsters Among Us 3.5 out of 5 stars.

Brush up on previous seasons of American Horror Story with CrypticRock: