American Horror Story: Freak Show, Test of Strength, is another episode that highlights man’s capacity for evil, and “man” is used here in the literal sense. The villain at the center of the plot is Dell, the strongman with a secret and a tendency to turn his self-loathing into aggression. Equally evil, though not given as much screen-time, is Penny’s abusive father. Dandy also makes an appearance, and his love affair with Bette comes to an end before the credits even roll. Dot has convinced Bette to return to the freakshow by candidly (and telepathically) pointing out that there’s “something wrong” with Dandy. Bette relents, and Dandy, rejected yet again, becomes enraged. Although he does not make an appearance again during this episode, it is clear that he shall strike again, likely with a revitalized commitment to his newfound identity as a murderous clown. However, as evidenced during Dandy’s bumbling murder of Andy, Twisty’s (giant, red) shoes are difficult to fill, so it remains unclear how much of a threat Dandy actually poses to the performers, especially since, to some extent, they are on to him. 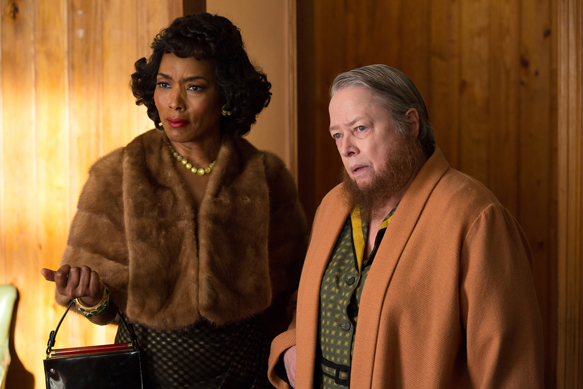 Dell Toledo is a far more prodigious threat. In Test of Strength, Stanley notices this and uses his knowledge of the strongman’s sexual preferences for blackmail. If Dell provides him with a “specimen” for the American Morbidity Museum, then Stanley will refrain from outing him. Amazon Eve seems an unlikely — and stupid — choice of victim for Dell, but taking into consideration his issues with his own sexuality as well as that of his wife, whom we now know is 100% woman, it makes sense that Dell would attack a character who dares to be both transgendered and happy at the same time. Unsurprisingly, Eve out-strongs the strongman, and Dell becomes the target of the shared ire of every woman in the camp.

Concerned, Jimmy suggests contacting the police, and Ethel scolds him for his naivete. Whether or not she realizes Jimmy will figure out the truth about his parentage is unclear, but she insists that he “handle” Dell on his own. The father and son decide to talk it out over drinks, and as they get more inebriated, Jimmy especially, they begin to bond. Other than a passing moment where Dell nearly smashes his son’s head in with a brick, the outing goes well, the truth is revealed, and the two return to camp with all of the alcohol-soaked affection that a father and son should share. The women are not pleased, and at this point, it looks like Jimmy, the most agreeable of the bunch (as far as main characters go) might be corrupted by his father. 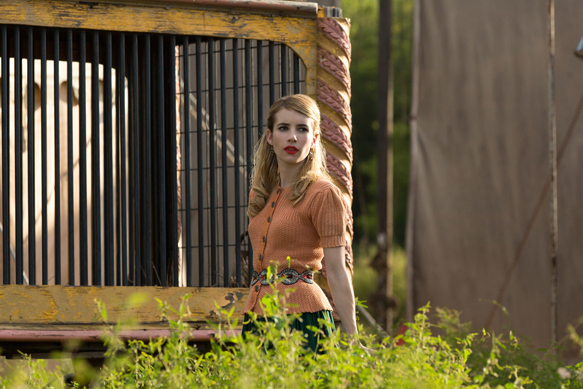 In keeping with the bad dad theme, Penny’s father (Lee Tergesen) also behaves badly in this episode. When Penny defies him and tells him of her plans to live with Paul in the more accepting environment of the freakshow, he exhibits that collected, almost gleeful, kind of anger that suggests an unsound mind lurking behind his unperturbed facade. He does not yell or strike Penny as one might expect, for a simple expression of rage is not enough for him. Neither is disowning her, although he does plan to do so. Since there is really no way for him to stop her, he will let Penny go, but not without inflicting on her a lasting revenge that she will be forced to endure for the rest of her life. With the help of some sedatives and an artist named Morris, Penny’s father exacts his revenge and proves to be even more detestable than Dell. Living in a time of intolerance as the homosexual progeny of a line afflicted with ectrodactyly, Dell is not only a monster, but a victim. Penny’s father is just a monster. Even though this scene involves a practice that takes place every day, and nothing is even shown on screen, it stands out as one of the more disturbing scenes of the season, and, for the first time since Meep’s murder, the viewer might just care enough about what has taken place to hope to see justice in a later episode.

The men are not the only ones behaving badly in this episode. Elsa continues to entertain Stanley’s promises, and the twins, in turn, blackmail Elsa, promising not to reveal the fact that she sold them to the Motts if she agrees to their varying demands. Other than that, it is the men who make American Horror Story a Horror story. That is not to say they are without depth though, e.g., Dell who at times exhibits a tenderness that makes him an almost sympathetic character, especially considering his grief over his missing (dead) lover Andy. Even when he commits the extreme act of cruelty that makes for the other horrific scene in Test of Strength,  he does so out of desperation and with tears in his eyes. That the viewer can sympathize with a villain of Dell’s caliber is a testament to the skills of the writers and actor Michael Chiklis.

Test of Strength is — pardon the pun — strong in comparison to most episodes of  Freak Show. The plot is tight and it contains some scenes that, although not scary per se, are certainly horrific. For the sake of one of the most likable of Elsa’s performers, we can only hope that one of those scenes is yet another of con artist Stanley’s fantasies. For the sake of the series’ integrity as a Horror show, however, we can only hope that it is not.  CrypticRock gives American Horror Story: Freak Show, episode 7, Test of Strength, 4 out of 5 stars. 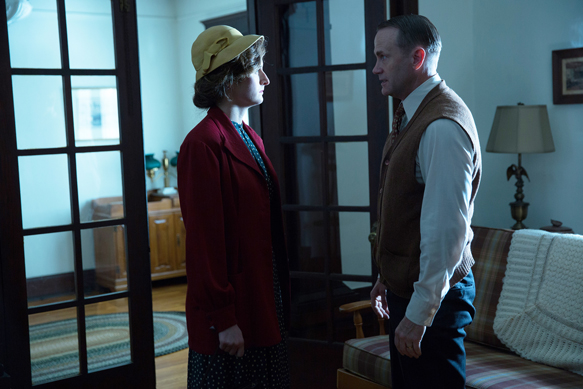 Tune in to FX network on Wednesday night at 10 PM to find out what is dream and what is reality, and, perhaps more importantly, whether Jimmy will sing another Nirvana cover.