At this point in American Horror Story: Freak Show, it seems as if main villain Dandy Mott is channeling Madame LaLaurie from Season 3. Episode 9, Tupperware Party Massacre shows viewers that he is really coming into his own as a murderous psychopath, procuring blood for his pampering bathroom rituals with much more ease and confidence than he did in the beginning. No longer awkward and fumbling, Dandy has discovered that he can manipulate people with his money and his looks (even though most viewers find his perpetually smug visage repulsive). The title of this episode is quite apt considering Dandy’s latest escapade, where copious blood is shed in a prosaic suburban setting. It took a while to get there, but the writers are finally embracing Horror with the proper gusto for a show that claims the genre even in its very title. 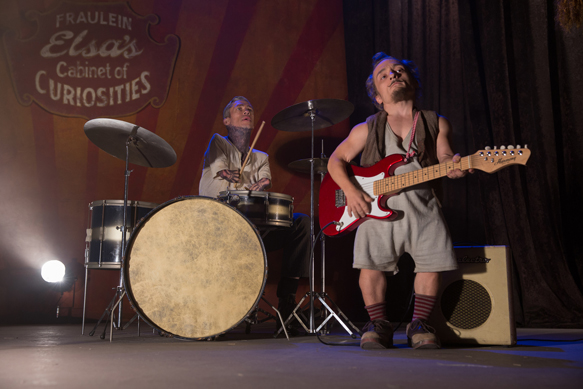 This is not to say that Freak Show has made a complete turn for the better. It can get quite silly at times and the plot is still disjointed. Occasionally a character will appear after being absent for some episodes and it might take a moment for the viewer to remember where things left off or why they should even care about this person. (Penny comes to mind as one of these characters; it took a few moments and an online search to confirm that Paul’s love interest was indeed the sassy candy striper from Episode 1). Other times, just when it seems as if another sub-plot cannot possibly be added to the already overwhelming narrative, a new character will be introduced. This is the case in “Tupperware Party Massacre” when a handsome gentleman from Desiree’s past (Malcolm-Jamal Warner) makes a brief appearance toward the beginning of the episode, but is not brought up again, relegated to the viewer’s ever-growing list of characters who do not seem to serve any purpose in the plot. Viewers can only hope that Warner’s character returns in the next episode instead of resurfacing later, when his thirty seconds of screen time has already been forgotten, sending viewers (and reviewers) to IMDb to figure out just who the hell this person is. 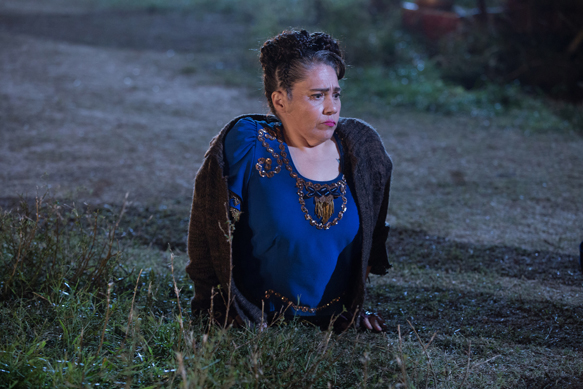 The season regulars, at least, have been active and some of the subplots that have been lagging make headway in Episode 9. Jimmy is still distraught over Ethel’s death, drowning his sorrows in liquor and flesh (the latter belonging to Barbara, the resident Fat Lady.) When Maggie catches Jimmy and Barbara in the act, she seems mildly annoyed, but the real drama surfaces when Dot professes her love for Jimmy. Earlier in the episode, Bette offers to make the ultimate sacrifice for Dot, and the two decide to forego the surgery they had been planning, thwarting yet another of Stanley’s plots to murder them. When the twins approach Jimmy, they exhibit a certain serenity, a confidence in having finally settled into their shared lot in life. Portraying two women sharing one body, both vulnerable and self-assured, seductive and tender, beautiful and grotesque, Sarah Paulson’s acting is superior.

It almost comes as a surprise when Jimmy ultimately rejects Dot’s earnest offering of love, the intensity of feeling heightened by Bette’s selfless devotion to her sister’s happiness. Jimmy is in love with someone else, presumably Maggie, and although Maggie is a likable character, that the able-bodied, classically beautiful blonde has won the hero’s heart is disappointing, especially considering that earlier episodes highlighted the subtle blossoming affection between Jimmy and the twins. Perhaps there is still hope for Dot, though. Despite his flaws, Jimmy places high value on integrity, and it is possible that Maggie’s involvement with Stanley is something Jimmy will not be able to get past.

In contrast to Bette and Dot’s self-acceptance, Dell Toledo, in a state of despairing remorse, pens a suicide note to Jimmy. His suffering is deserved when considering his willingness to sacrifice the innocent in order to preserve his secret; that he is compelled to keep this secret in the first place forces one to sympathize with him. Dell is not a good person, but his victimhood, even though it is largely self-imposed, makes it difficult to label him as being purely evil. There are those who connected to his victim and who want to see him suffer. Then there are those who cannot help but feel grudging compassion for Dell as, weeping in shame, he takes steps toward ending a life of lies, cruelty, and regret. It is scenes like this one, where actions and body language reveal more than dialogue, that allow skilled actors like Michael Chiklis to really flex their muscles. 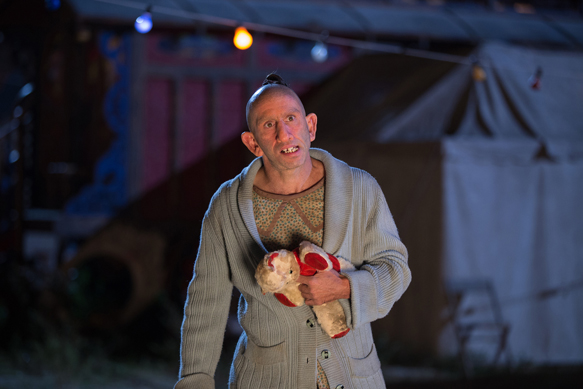 Amid all the drama, comic relief is provided in the context of violence. One murder is so sudden that it is cartoonish, and the viewer focuses more on police corruption — a topical turn of events indeed — than sympathy for the victim. Dandy’s gleeful approach to murder inspires anger, but in this episode, there is an air of frivolity in every scene in which he appears, despite the fact that he slaughters a number of innocent women all in the name of vanity. Perhaps the viewer’s enjoyment occurs as a result of her knowledge that Dandy will likely come to an untimely end himself. Evidenced by the events of earlier seasons, American Horror Story typically has a strong sense of justice.

After the Dec. 17th episode, Freak Show will take a break until January 7th, so hopefully Wednesday’s episode, Orphans, will be a strong one. If not, interest will wane over the three week hiatus. A sharp decline in viewership indicates that many have given up on the show already. It is too late for the show to redeem itself fully, but with its strong cast, ample budget, and the endless possibilities of the freakshow setting, there is hope that at least the final episodes will live up to expectations.  CrypticRock gives Tupperware Party Massacre 3 out of 5 stars. 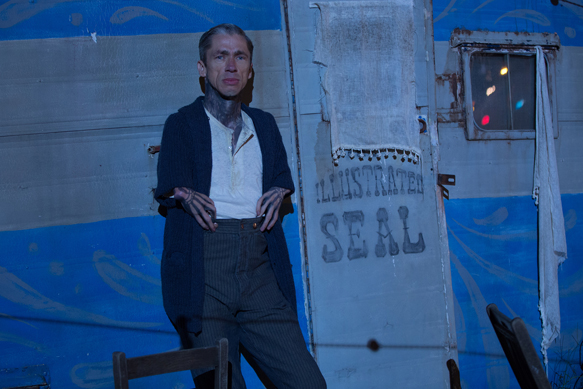