It looks like Freak Show is shaping up to be the best season of American Horror Story yet. Episode 2, titled Massacres and Matinees, ramps up the tension with another murder and a police investigation. Of course Elsa’s “monsters” are the prime suspects, and, in addition to sniffing around the midway, the police have imposed a curfew. Reluctant to perform during the day, Elsa fears the curfew will damage business, but when she appoints a newly arrived Strongman, Dell Toledo (Michael Chiklis), as head of security, he insists on a matinee performance even though Elsa believes her monsters’ acts are more appropriately viewed by the dark of night. 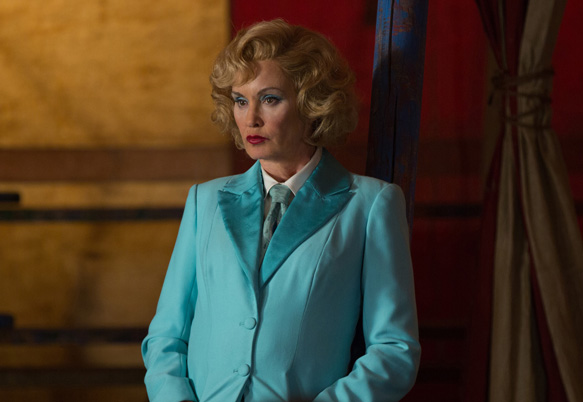 In the hours leading up to the daytime performance, conflict abounds, subplots continue to develop, and new characters are introduced. Dell, the aforementioned strongman, is trouble from the start. Appearing on the scene with his wife, Desiree Dupree (Angela Bassett), it soon becomes apparent that Dell has chosen to join Elsa’s Cabinet of Curiosities for reasons beyond the fact that there is no work elsewhere. Bassett’s sultry Desiree appears too “normal” for the show on the surface, but she soon reveals her credentials, and together the couple convince Elsa to give them a chance.

Meanwhile, contrasting the freakshow performers’ spartan (albeit colorful) existence on the grounds are Gloria Mott and her son Dandy, who inhabit a grand mansion and dine at opposite ends of a table large enough to host a royal banquet. Dandy’s characterization is completely over-the-top, but somehow, in the horror milieu, it works. Gloria has coddled him to the point where he is a manchild, in the truest sense of the word — he doesn’t drink his liquor; he suckles it from a nipple attached to a crystal glass engraved with his name. His infantile nature is combined with a monstrous sense of entitlement, and even though Gloria wishes for a grandbaby, complains that Dandy will not date the girls she suggests for him, and there is apparently no father figure to suggest an Oedipal complex, there is something obscene about their relationship. The Motts made their desires known in episode 1: they would like to purchase a human being from Elsa to use for their entertainment. Her offer rejected, Gloria stumbles on another opportunity to provide companionship for her son, though it appears that Dandy’s new playmate might not be entirely cooperative. 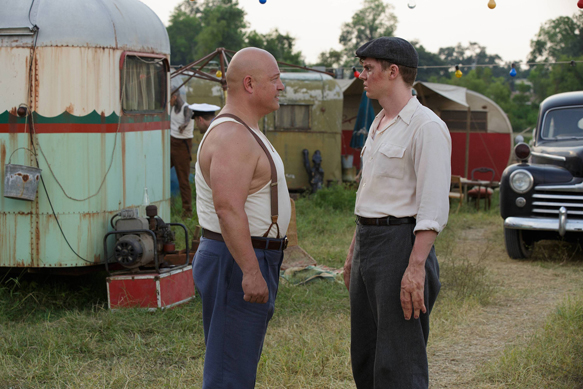 Another memorable scene from this episode involves Jimmy Darling, carnie friends in tow, visiting a local diner where he had a brief flirtation with a waitress in episode 1. In a moment that can be read as a metaphor for the treatment of publically demonstrative gay couples, a woman complains that the group’s presence is disturbing to her and her daughter. Dell appears and chastises Jimmy for providing a “free show.” The scene reminds the viewer, again, of the intolerance people like the characters in the show faced in the 50’s and that they sometimes face still. That a number of the characters are played by actors who actually have the medical conditions represented in the show only serves to drive the point home further. The viewer must confront the fact that she is in some way similar to the audience at Elsa’s show. Focusing on a time of relative ignorance, the writers do not bother with euphemisms or politically correct language, and sometimes the harsh words and brutality that are inflicted on the characters is difficult to take. 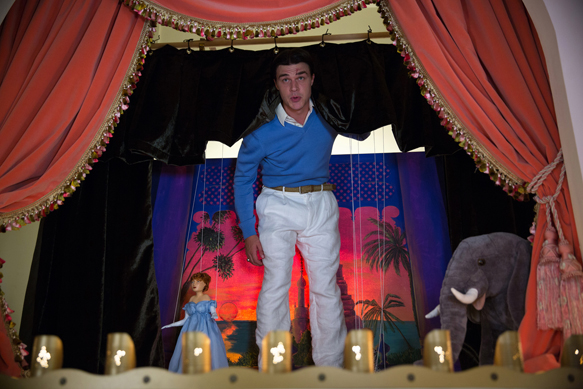 American Horror Story is essentially a soap opera with a Horror theme. Much of it is tongue-in-cheek, and it has enough humor and sex to temper the violence and gore. Freakshow in particular, borrows a page from Glee (by the same creators) and includes oddly hilarious musical anachronisms. Last week’s episode featured David Bowie’s “Life on Mars,” while “Massacres and Matinees” features Fiona Apple’s “Criminal.” The score itself, during tense moments, sounds just like Black Sabbath’s well known eponymous track. American Horror Story is everything one would expect to be light entertainment, but it does not always make for easy watching, especially taking this episode’s profoundly upsetting conclusion into account.

That said, it is worth a watch, especially for those who are skittish about Horror in general since the gore is relatively mild. It is absurd at times — perhaps most of the time — and it is not something that could be considered “high art,” but it is wildly entertaining and not without meaning. With saturated carnival colors, Freakshow is especially visual, and its many characters and plotlines provide for an entertaining experience.  CrypticRock gives Massacres and Matinees 4 out of 5 stars. 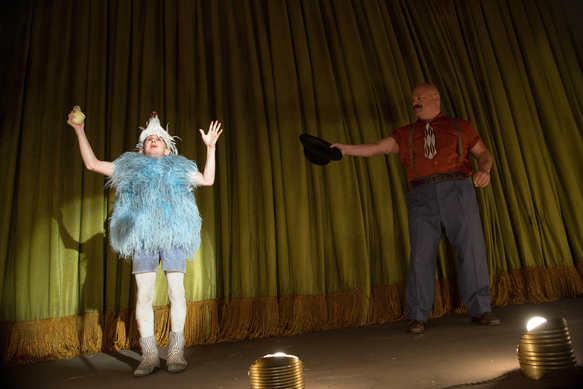 October 22nd brings the first half of a two part episode called Edward Mordrake that takes place on Halloween. Part 2 , where it looks like viewers will gain some insight about Elsa’s history in Germany, will run on October 29th.  American Horror Story: Freak Show airs Wednesdays on FX at 10 p.m.