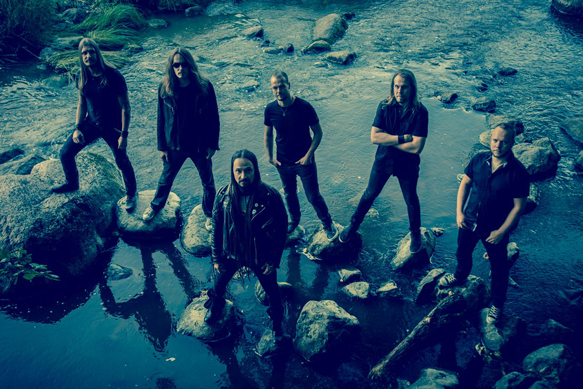 Any band on as strong of a run of album releases as Amorphis has enjoyed, has to have some pretty happy fans. Ever since 2004, the Helsinki, Finland natives have gone from strength to strength, cruising to new heights on the back of an immutable lineup stability and a creative synchronicity that appears to have no end. Album number twelve, released September 4th, 2015, carries the title Under the Red Cloud, and appears only three years on from 2012’s critically acclaimed Circle.

Once more going to Sweden for the lion’s share of the recording process, the Finns elected to bring in famed producer Jens Bogren (Soilwork, Dark Tranquillity, Katatonia, Amon Amarth) to help focus their creation in the studio. Unlike in the past, Bogren demanded far more from the band than Amorphis was collectively used to, and to no one’s surprise, the Finns delivered. Differing from 2012’s Circle, the emphasis for Under the Red Cloud appeared much more focused on melody, tempo, and a richness of instrumentation that, while far from absent on Circle, was certainly a bit more subdued. Fans of the triumvirate of 2007’s Silent Waters, 2009’s Skyforger, and 2011’s The Beginning of Times should rejoice, as the free flowing passages of keys, flutes, and guitar hark to these albums a bit more so than on Circle.

From the Santeri Kallio piano intro to the opening title track, the playful interplay of the Esa Holopainen/Tomi Koivusaari guitar duo build a tune of adventurous melody, one fans have grown accustomed to because Amorphis do it so well. The drums of Jan Rechberger sit perfectly in the mix, underpinning the gorgeous, capering song with just the right helping of balls. Tomi Joutsen sounds as strong as always, his clean vocals perhaps never sounding better. An unforgettable chorus completes the dreamlike journey of this opening track. Clearly fans are in for a treat. A world-class keyboard/guitar solo trade off then further augments the tune. It is 100% classic Amorphis in delivery and sound, proving there is no dearth of creative energy going on within the ranks.

Unforgettable, instant classics. Every Amorphis album has them. The first one to pop up on Under the Red Cloud comes in at number two in the order. “The Four Wise Ones” is pure Melodic Death Metal at its finest. Amorphis’ habit of building a song through a slower, heavy verse into a quicker, heart-thrumming chorus is done wonderfully here. Joutsen sounds raw in his growling, fresh as warm blood on Winter snows. Bogren coaxed some good sounds out of the man’s throat, to the benefit of all who love this band. Some cool effects on the quieter sung parts work very well, along with some well-constructed instrumental breaks scattered throughout the tune’s 4:40.

Bands do develop patterns after a while, and after twenty-five years making music together, it is not surprising to find a song like “Bad Blood,” where Joutsen growls throughout the verses as the dominant form of his storytelling. Kallio’s strong keyboard presence keeps the song airy, and once more a clean sung, bardic chorus enchants the listener despite the tune’s rampant heaviness. Will some fans wish for a departure from the Amorphis ‘formula’ per se? Perhaps, perhaps not. One thing is certain. Amorphis has perfected their songwriting craft, and even if they keep to preexisting patterns, they do so in a mature and capable way. What transports songs like “The Skull,” which move along in a reliable, if a bit predictable way, is the chorus. Again, and this is something that cannot be taught, the flow of the chorus is what separates Amorphis from virtually every other similarly constructed Heavy Metal band out there. With lyrics applicable to modern life, but forged in the spirit of the ancient peoples of Suomi, Joutsen’s choruses soar like eagles upon currents of air, carrying the scent and the spirit of their sylvan homeland right to the listener’s heart. Kallio’s keyboard performance cannot be overstated; fans will savor the way he ingeniously enriches the tunes.

“Death of A King” is a throwback to the Tuonela era, with some Eastern sounding guitar licks amid an accompanying flute. Is there no end to the magnificent guitar leads routinely produced by the Holopainen/Koivusaari tandem? Fans of Amorphis will savor this one, while new fans will find a good place to start their journey into this transcendent act’s colorful metier. Fans will hear “Sacrifice” and “Dark Path” as well as hear a band who knows who they are, what they want to say, and how they want to say it. This is Amorphis playing Amorphis post 2004, with all hands on deck and all elements in sync. Tuneful melodies abound; the album is pure enjoyment and silk for the ears. Kallio’s piano and keyboard leads are like a third guitar, adding layers of richness to the already well-composed songs.

On the first few albums featuring Tomi Joutsen on vocals, it seemed the band would segregate the songs he growled in and the ones he sung clean. Later albums, and especially Under the Red Cloud, see the growls used more occasionally. “Bad Blood” notwithstanding, of course. “Enemy at the Gates” moves into Rush territory around the 3:45 mark, and is a perfect example of the wise choices the band and producer made about Joutsen’s voice. His growls here take on the old school feel of Tales From the Thousand Lakes era Amorphis, when Koivusaari manned the mic.

For fans looking for a curve ball, look no further than the mystic “Tree of Ages,” with its medieval flute intro and Folk-Metal melodies. The guitar breakdown and Folk-infused keys could probably get a stone statue dancing along, making this song an album highlight for fans to treasure. Never ones to let an album stagnate, Amorphis include upon the final track “White Night” the vocals of Aleah Stanbridge (Trees of Eternity), whose soulful vocals counter Joutsen’s growls before he provides some of his strongest clean singing on the chorus.

The bonus tracks, named “Come the Spring” and “Winter’s Sleep,” show that Amorphis had no dip in quality for the material they compiled this time around. Stylistically in a similar vein to the proper album, the former is a steadfast rocking ballad that is pure listening enjoyment, its burgeoning melodies and intricate, galloping keyboards not unlike the riot of growth that comprises the Spring. The latter is another example of Amorphis balladry, full of the longing and restlessness of the glacial Finnish Winters of old.

Fans should rejoice with Under the Red Cloud, because the argument can be made that Amorphis is now eleven years into a renaissance era so creatively fertile, it is still spreading its wings over the Rock and Metal world. Few bands achieve this symbiosis of their working parts for even one album, let alone the plethora Amorphis has bestowed upon their fans. From the scorching vocal performance of Tomi Joutsen, the endless magic bag of melodies from the Holopainen/Koivusaari partnership, the elite and boundless wonder in Santeri Kallio’s fingers, to the rock solid rhythm section of Niklas Etalavuori on bass guitar and Jan Rechberger on drums, Under the Red Cloud is a triumph among triumphs for Amorphis. CrypticRock gives this album 5 out of 5 stars. 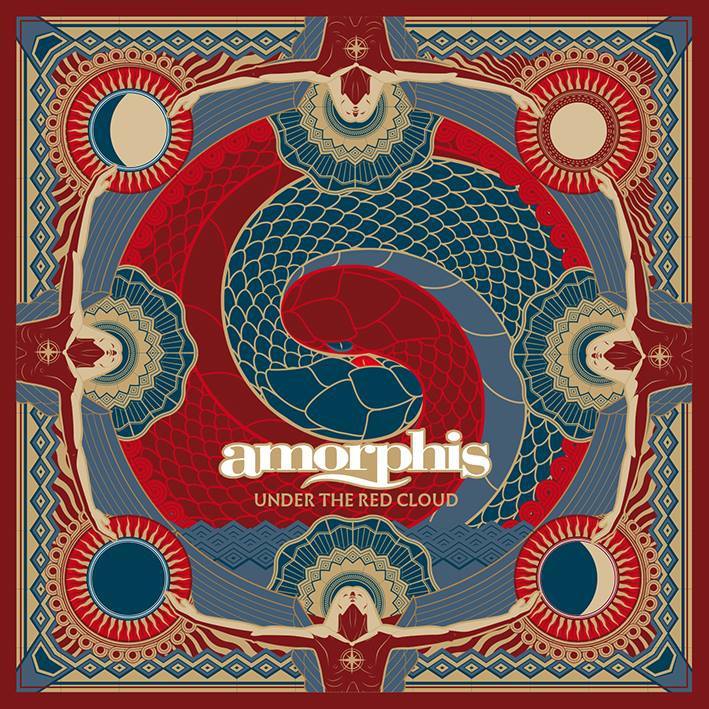 Interview – Esa Holopainen of Amorphis Talks Silver Lake
Like the in-depth, diverse coverage of Cryptic Rock? Help us in support to keep the magazine going strong for years to come with a small donation.