Anathema announces U.S. tour with HIM

Following the band’s recent appearance on the inaugural voyage of the ‘Progressive Nation at Sea’ cruise, the UK’s heralded rock group, Anathema, has announced a U.S. tour for March as special guests of Finland’s, HIM. The tour marks just the second proper North American run for the acclaimed group, after a successful tour last September/October which Billboard.com called “powerful… no one walked away disappointed.”

“Anathema is delighted to return to the United States as special guests of our personal friends Ville Valo and HIM. It’s always a great occasion playing with our Finnish mates – as we’ve known each other’s music for many years and have been sharing stages together on a number of occasions since our main support to them in the UK for ‘Dark Light’ in 2006. To do this in the United States, the birthplace of rock and roll and one of Anathema’s true musical and spiritual homes, is just a fantastic prospect – especially so soon after our first headlining tour last autumn which was a success beyond our expectations. We hope to really provoke a strong reaction from the audience, and I’m sure we will perform a song or two from our brand new album, which is being finished as I write. HIM in the USA? Bring it on!”

A full list of confirmed tour-dates can be seen below. Shows are selling out fast, so check for tickets at: www.livenation.com / www.ticketmaster.com.

Anathema is currently in the studio working on the follow up to the 2012 acclaimed album,Weather Systems, and Universal, the stunning live concert film directed by Lasse Hoile that was released last fall.

The band has been at the forefront of the UK rock/metal movement since its inception, influencing a myriad of bands to follow. What began as a pioneering journey of melodic heavy music has outgrown all genres and limitations, fearlessly exploring new territory and new ways to express feeling through sound. 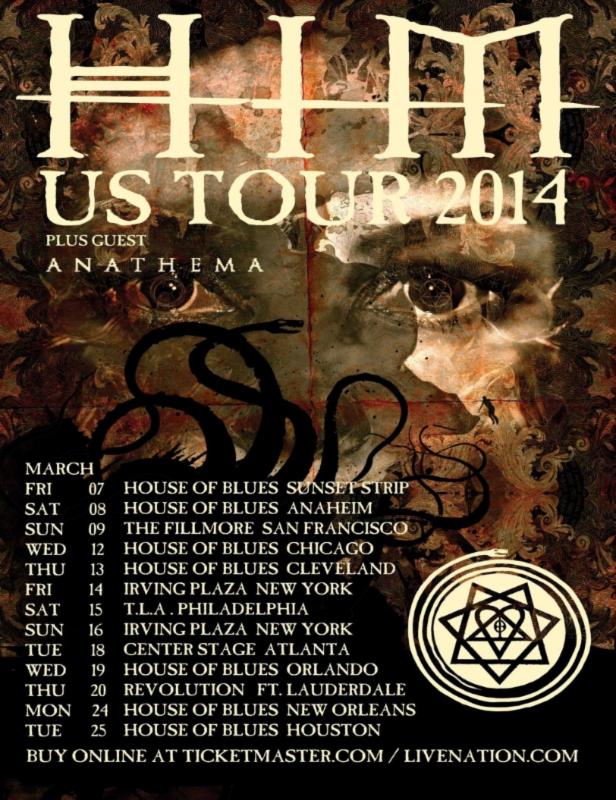