Andrew McMahon In The Wilderness – Zombies On Broadway (Album Review) 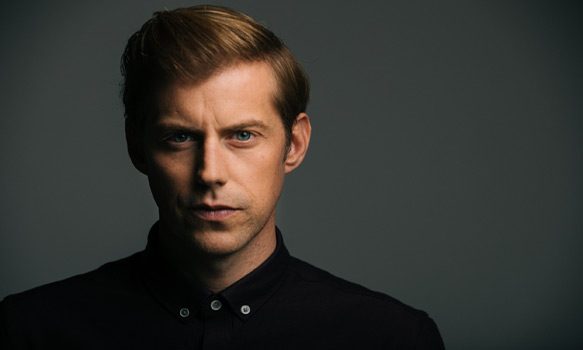 Kurt Cobain actually swung from a chandelier, though Sia only sings about it. On his latest album, Zombies On Broadway, Andrew McMahon is swinging from a fire escape. Take that, Kurt and Sia! Although, truthfully, McMahon has always been a bit of a musical acrobat, he is a singer, songwriter, pianist, and the nexus behind such bands as punky Something Corporate, Pop Jack’s Mannequin, and now, the Indie Pop Andrew McMahon in the Wilderness. A highly talented individual, McMahon’s second album under the name is set to release on February 10th, leaving much to talk about.

Those not well-versed on McMahon’s story, it all started when he began playing the piano at age nine. Now thirty-four, he began his musical journey at the tender age of sixteen with the aforementioned Something Corporate. The piano-driven, Punk Rock band formed in 1998 would go on to play the main stage at Warped Tour, tour with the likes of Good Charlotte and New Found Glory, and release memorable records such as 2003’s North. Then, in 2004, the band went on an indefinite hiatus.

With Something Corporate out-of-the-picture indefinitely, McMahon channeled his musical energies into a new project, Jack’s Mannequin. The project’s first studio album, 2005’s Everything in Transit, featured instant hits such as “Dark Blue” and “The Mixed Tape.” From here, McMahon proceeded to release 2008’s The Glass Passenger and 2011’s People and Things.

All this said, let us rewind. In June of 2005, McMahon was diagnosed with acute lymphoblastic leukemia. As he underwent treatment, McMahon took to his blog to keep fans informed on the progress of his condition, he was candid and open about his health. On the day that Everything In Transit was released and debuted at #37 on the Billboard 200, McMahon underwent a stem-cell transplant. One hundred days later, he celebrated with his first concert in six months: a private invite-only show in a small venue in Los Angeles, California.

In 2006, McMahon founded a non-profit charity, entitled The Dear Jack Foundation, to raise funds for cancer research. The organization’s primary beneficiaries are the Pediatric Cancer Research Foundation, the Leukemia and Lymphoma Society, and the regents of the University of California, Los Angeles. By 2014, The Dear Jack Foundation announced that, in just over eight years, they had raised a half a million dollars for The Leukemia & Lymphoma Society.

With the Jack’s Mannequin project having accomplished all McMahon had desired and more, but with the negative stigma of being attached to such a difficult time in his personal life, it was time to retire the name and move forward. McMahon would now be simply himself. In The Wilderness. Sometimes. First, he would release The Pop Underground EP and work as a songwriter on the NBC series “Smash.” One of the tracks penned by McMahon for the show, “I Heard Your Voice In a Dream,” would go on to be nominated for an Emmy Award for Outstanding Music and Lyrics.

Now the wilderness. In October 2014, the eponymous first album was released by Andrew McMahon in the Wilderness. McMahon would take the Indie Pop project on the road, and tour with the eclectic likes of Matt Nathanson, Gavin DeGraw, Weezer, and Panic! at the Disco. The creative wheels are not so easily satiated, however, and time has come for a new recording. Thus, Andrew McMahon in the Wilderness make a triumphant return to New York City and stereos worldwide with Zombies On Broadway via Vanguard Records.

Eleven solid, Indie Pop tracks encompass the whole of Zombies On Broadway, which is purported to be inspired by the City that Never Sleeps. While the music does not often conjure an image of the Big Apple, it is exactly what we all expect from McMahon: intelligent, well-written, and beautifully layered productions. On Zombies, he dances across a multitude of topics and genres, but generally stays grounded in the warm waters of Indie Pop.

Opening with “Zombies Intro,” there is a conglomeration of studio noise and city sounds, namely the subway. We segue immediately into “Brooklyn, You’re Killing Me,” a bit of a back-handed compliment to the NYC borough. A song about missing the West Coast, McMahon provides spoken word verses against an exquisitely-layered sonic buffet of a chorus. The result is an upbeat, danceable track that might not be the best thing McMahon ever put to record, but it’s certainly not going to turn anyone off, either.

What follows is pure sonic delight. McMahon takes a moment to remind listeners they are always on the cusp of tragedy or triumph in “So Close,” a nostalgic Pop song that could put him on tour beside Pop greats like Madonna. Though, he has not lost the grit of his Something Corporate days. No. In fact, Zombies On Broadway takes the Punk spirit of the young band and the adulthood of Jack’s Mannequin, tosses them into a blender with a Korg and comes out as something evolved, but still fun.

There are, of course, moments that remind us that McMahon has been to hell and back over the past decade, songs like “Don’t Speak for Me (True),” while a slow-tempo dance track that could be read as just another relationship song, seems to speak bigger volumes about McMahon’s health struggles and his refusal to submit. It is just one of the many tracks on the album that are short and to the point: including funky “Shot Out of a Cannon,” dancey “Island Radio,” and album closer, the un-birthday “Birthday Song.” As with all of McMahon’s music, piano and vocals hold down the fort.

A clear stand-out on the album, “Fire Escape” is the one track that truly evokes the feel of the city. Be it New York City, Los Angeles, Tokyo, Paris, the city lights are aglow on this whimsical song. “Let’s hang an anchor from the sun, there’s a million city lights but you know the one. You’re the reason I’m still up at dawn, just to see your face. We’ll be going strong with the vampires, baby,” sings McMahon about the highs of being in love. This is also the track where he swings from that fire escape!

Trying to make ends meet, working to live, but never living to work, encompasses “Dead Man’s Dollar,” one of the catchiest tracks on the disc. The responsibilities of adulthood never sounded so catchy as on this track, which has a bridge that is decidedly reminiscent of “Cecilia and the Satellite.” McMahon does take a break from all the dance and synthesizers to share a pure Pop moment with elements of Country on “Walking In My Sleep.” An uplifting love song about wanting to be beside your beloved even in dreams, McMahon is especially poignant here: we can literally feel the love.

Lyrically, McMahon is a king of the metaphor. On “Love and Great Buildings,” he suggests that love is like a piece of beautiful architecture: engineered to withstand the test of time. A beautifully inspiring track that is as sweeping as anything Something Corporate ever performed, the song is anchored by acoustic guitar, tambourine, and a very subtle banjo. This would make a splendid video!

Zombies On Broadway might not have a defined New York City feel, but despite this, it is an impressive offering from one of modern Indie Rock/Pop’s finest songwriters. A collection of often dancey, always well-written songs, the album is a collection of beautifully-orchestrated musicianship and emotionally poignant and inspiring lyrics that will wrap a koozie around listener’s heart. That, and, of course, make them dance.

For his always superior abilities with lyrics, beautiful layering of sonic textures, and the ability to continually create fresh aural material, CrypticRock gives Andrew McMahon in the Wilderness’ Zombies On Broadway a 4 out of 5 stars. 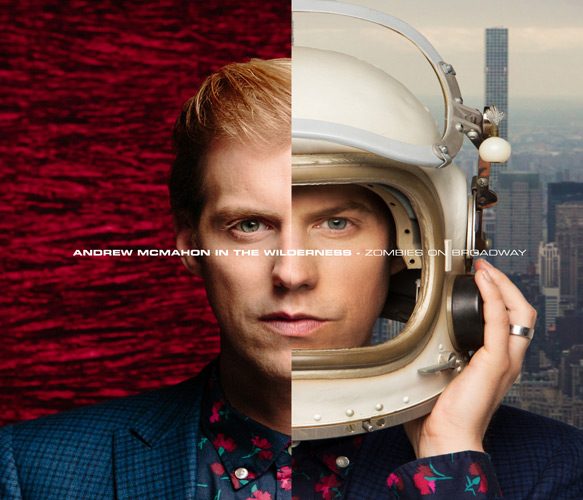 Andrew W.K. – God Is Partying (Album Review) AFI – Bodies (Album Review)
Like the in-depth, diverse coverage of Cryptic Rock? Help us in support to keep the magazine going strong for years to come with a small donation.