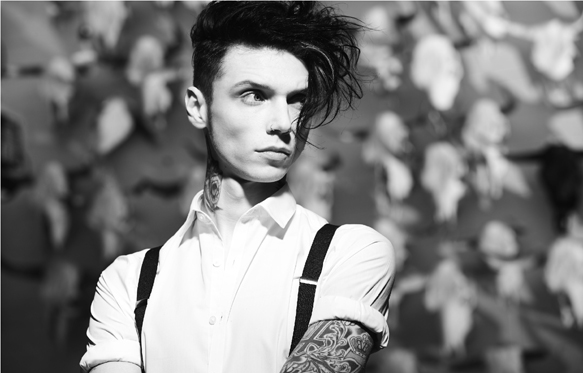 Gearing up for another adventure, Andy Biersack has always had a passion for creativity and vast goals. As a kid, he would listen to talents such as KISS, The Misfits, and Mötley Crüe, which would soon influence his life as he knew it. While being completely submerged in the Rock scene, Andy formed his very first band at the age of fourteen, with nothing but dreams of creating music he loved. With the whole world ahead of him, Andy grabbed hold of it and made it his own. A couple years later, Biersack formed a band that would later be known as Black Veil Brides, who were signed to Standby Records in 2009.

Other than creating heart-stopping music and touring constantly, throughout his time with Black Veil Brides, Andy has made a multitude of accomplishments. With his hard work, determination, and dedication, he is almost unstoppable; for Biersack, one project was/is not nearly enough. Taking on a roll in Average Joe in the Funny Or Die web series on YouTube was something new and exciting for Biersack while getting him ready for his starring roll in the film American Satan with friend and co-star Ben Bruce of Asking Alexandria, which is due to be released sometime this year.

Aside from Black Veil Brides and acting, Biersack has always had a passion for different styles of music, resulting in actions to pursue it further. A side project from his successful band, Andy Black is a new and exciting idea, different from anything that he has ever done in the past. Not fully stepping away from Black Veil Brides, Biersack aka Black ventured into the world of being a solo artist with the announcement of his new album The Shadow Side, released May 6th, produced by good friend John Feldmann (Blink-182, Sleeping With Sirens, All Time Low).

The Shadow Side kicks off with “Homecoming King,” setting a gloomy tone for the track with violin and dark vocals. Slightly more uplifting during the chorus, this song highlights Black’s talented voice and sets up the rest of the album. Continuing on with his hit single, “We Don’t Have To Dance,” this is a track that will definitely make any listener do the exact opposite and want to dance. Instantly jumping into catchy and upbeat guitar riffs, alongside perfectly written lyrics, this track will have any music lover alike hooked. Released March 18th, followed by a music video on the 21st, fans were ecstatic and could hardly wait for the entirety of the album. Similar to the track before, “Ribcage” is an upbeat and fun track to be engaged in. With infectious lyrics and memorable musicality, this piece will leave listeners anxious for more music.

When an artist can grab a hold of a listener with their lyrics, it is truly a special accomplishment. With “Stay Alive,” featuring Blink-182’s Matt Skiba, any listener will feel the raw emotion and energy put into this piece. Inspirational and heartwarming, this track highlights lyrics, “Stay alive through the good times, stay alive through the bad,” giving inspiration to those who struggle to make it through each and every day. Moving forward with “Love Was Made To Break,” a song clearly about a relationship that has died out, shows an emotional and vulnerable side of Andy Black.

Just as emotional and touching as “Stay Alive,” “Beautiful Pain” is a piece about personal loss and how one deals with this negativity in a positive way. Full of lush harmonies and poignant lyrics, this is a track that is relatable and heartfelt. Possibly triggering for some listeners, “Put The Gun Down” touches on the subject of self doubt, suicide, and eventually self-realization. This one track takes listeners on an incredible journey through beautiful instrumentation and sentimentally sung lyrics. Then comes the climax of The Shadow Side with “Drown Me Out,” a strong and solid track. With powerful vocals, this track is about rising up and taking a stand for who you are, not letting anybody putting you down. Starting softer than usual, “Paint It Black” is a beautiful piece that can be interrupted by a as about how one will make it out alive from the downfalls that occur throughout life, connecting to the past couple of tracks previously heard. Black himself states the song is written by his wife Juliet Simms, and is one of his favorite off the record.

Jumping back to the darker side of Andy Black, “Break Your Halo” raises the bar for the last couple of songs off of The Shadow Side. Lyrics, “I’m the only hope you’ve got to see the light,” stand out to listeners as they go through this beautifully mastered piece. This track highlights gloomy background music alongside powerful lyrics. Jumping to “Louder Than Your Love,” this track is probably the highlight of the album. With a bouncing tempo, fun orchestration, and clear lyrics, listeners will not be able to get enough of Andy Black. Slowing down a bit, “Broken Pieces” features a somber mood, but definitely highlights emotions that were felt in earlier tracks. Closing out The Shadow Side with “The Void,” listeners will be completely eager to give it another listen. This track is about pushing through and moving on, highlighting impressive vocals and inspirational lyrics from Black.

Taking on a new direction with his music and giving fans an introspective delight, Andy has surely outdone himself. Any Black Veil Brides fan would be truly proud if not anything else, for an amazing accomplishment. Although very different from his past music, it truly shows the amount of pure talent and zeal that goes into each and every song. Just in time for summer, Black’s new songs are a perfect fit for any music lover. CrypticRock gives Andy Black’s The Shadow Side 4.5 out of 5 stars. 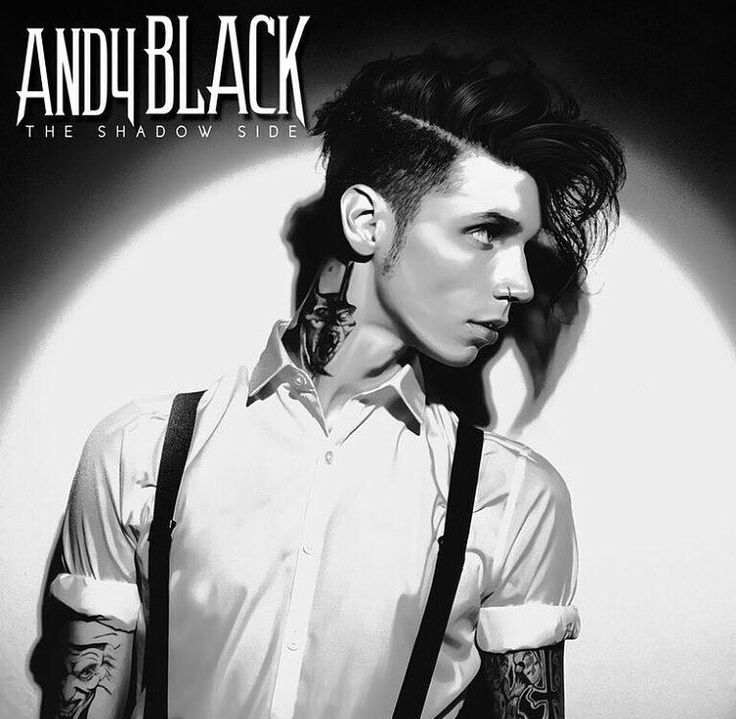