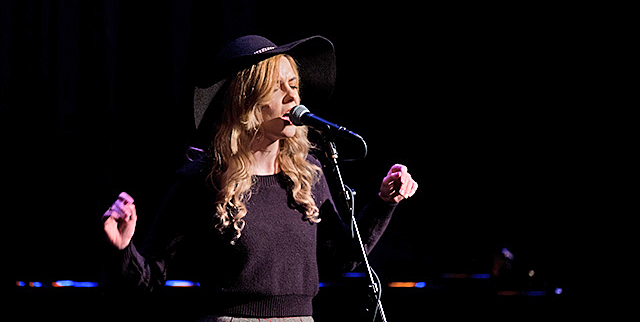 From an early age, Singer-Songwriter Anna Nalick showed a great interest in music. In fact, coming from Glendora, California, she grew up under the influence of grandparents who had performed on Broadway as well as parents who introduced her to the works of great artists such as Elvis Presley and Led Zeppelin, to name a couple. Although, it was writing music that became a great hobby of hers, and as a young girl, she could be found sitting in class rewriting the lyrics to Cranberries songs. What became a more pronounced hobby, she began writing music for local Rock, Punk, and Ska bands soon after. Nowadays, Nalick states that a lot of her inspiration is derived from literature, history, people-watching, and even psychology. A professional musician for over a decade now, Nalick harnesses that inspiration into writing and recording. Having released two studio records, beginning with her 2005 gold-selling debut, Wreck of the Day, and most recently, 2011’s Broken Doll & Odds & Ends, Nalick is a personal performance that garnishes dedicated followers.  Spending ample time in front of live audiences, in the Autumn of 2015 she is back on the road again, and on Friday, October 30th, she brought her talents to YMCA Boulton Center in Bay Shore, NY.

The night prior to Halloween, in the intimate seated theater setting of the YMCA Boulton Center, the audience in attendance were treated to soothing music, incredible vocals, and silly anecdotes from the adorable Nalick. Nalick, who took to the stage dressed in quintessential Fall attire with a circa ’90s Alternative Rock flare: a soft mid-rise brown sweater, a knee-length plaid skirt, Abraham Lincoln knee socks, combat boots, and one sweet-ass floppy black hat (of which she later said she had picked up in Salem, MA), stole the audience’s hearts with her charm and raw talent.

During her performance, she would state how she observes people or takes stories that fascinate her and creates her own metaphors, stating that her work is mainly introspective and how she has always enjoyed writing. She shared that she pictured herself being a writer; how she would have loved to be Mary Shelley, F. Scott Fitzgerald, or Nathaniel Hawthorne, but never imagined or longed for being one to perform in front of a large group of people. Needless to say, sometimes plans work out for the best, regardless of what one plans, and Nalick proves to be an outstanding performer. Despite assuring her shyness about performing in front of a crowd, Nalick was nothing but at home on stage. Joining her on piano was Lincoln Cleary, who beautifully complemented her voice and her occasional acoustic guitar playing with his skills on the ivories.

Opening with “Consider This,” they unveiled a song describing the struggles of dealing with a relationship where someone is trying to change you, but being strong enough to stay true to yourself. Following this song was another track off of Wreck of the Day, “Citadel,” and Nalick broke out into a small fit of giggles from seeing shadows on the theater wall from a stretching security guard. This would set the mood for the evening as a laid-back and light atmosphere, where the audience could interact and get to know Nalick as a person and as an artist.

Nalick went on to play some new material including a song called “Aura” that is set to be on her upcoming album. She then started to play her acoustic guitar to a piece entitled “Burn Fade.” With each song, it appeared Nalick’s voice was getting better, a sultry Mezzo Soprano that dripped with the emotions of every lyric. The most noteworthy example of this, was when Nalick performed “Stone.” The simple diary entry lyrics wrought with emotion, the audience was in sheer awe of her talent. Nobody minded when she unexpectantly broke this trance by telling a story about her Catholic school days, and let the stream of  random thought move on to topics such as Halloween being “Mischief Night,” and personal interactions with fans, such as “foul-mouthed grandma.” She fondly talks about her meetings with fans as if they have become friends and how they have inspired her work and performances. She also stated she was feeling particularly nostalgic because this year marked the ten year anniversary of Wreck of the Day. As she played some more songs from that album, she commented on how she could hear the audience singing along to “Catalyst,” as well as how they sounded good. She even let two dedicated fans, who have followed her tour for the last three venues, choose a favorite song of hers that she would perform, even if she has to do it acappello; and that she did, complete with Jazz hands and all, a little homage she threw in for her Broadway performing grandparents.

The Broadway influence was very predominant in her performance of “Hazy Love,” with a showtune-like sound and style that was upbeat and complete with more Jazz hands and snapping. A new song, but the audience was soon catching the lyrics and singing along. To close out her wonderful set, a song that needed no introduction,”Breathe (2AM),” took everyone back to those early 2000’s. Nalick held out the microphone and let the audience sing the chorus. It was very touching to watch her reactions to the crowd and the crowd’s reaction to her. It was less of a concert and more of a nice evening with a good friend.

To further the warm vibrations, Nalick graciously invited the audience to meet with her after the show. Nalick conversed with fans, comparing personal stories, signed autographs, and shared where she got her amazing Abraham Lincoln socks (a store in Hollywood, CA).  Nalick is a completely humble and down to earth person, as well as a woman with amazing talent. Nalick even honestly referred to her music during the show, stating,”I know it is Adult Top 40, but it’s really quite Rock and Roll.” Indeed she is right, and anyone who discounts otherwise would be remiss to check her out live. The release of her new album is schedule for sometime in 2016, so keep a look out and catch her on tour between now and December 3rd.

Photo credit: Charles Eames Photography
Like the in-depth, diverse coverage of Cryptic Rock? Help us in support to keep the magazine going strong for years to come with a small donation.