Anthrax – For All Kings (Album Review) 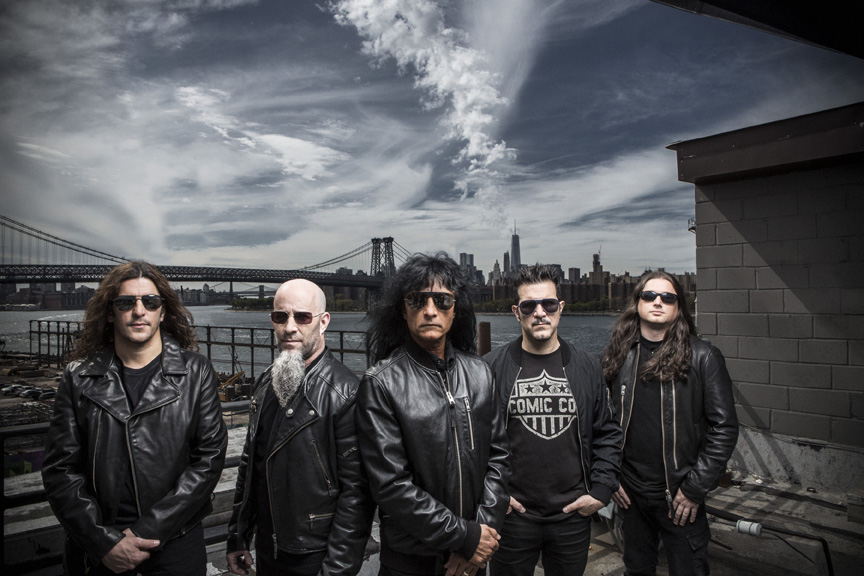 Anthrax was born during the rise of Thrash Metal in 1981 from the brutal and honest streets of New York City. Originally founded by Scott Ian and former Bassist Dan Lilker, it was 1984’s debut of Fistful of Metal that led them to rise to the top and become a notorious act ever since. There have been quite a few lineup changes where Ian (rhythm guitar) has been the only original member left along with long-time veteran members Charlie Benante (drums) and Frank Bello (bass). Vocalist Joey Belladonna returned back in 2010 just in time for the acclaimed tenth studio release of 2011’s Worship Music which was the band’s ultimate comeback from years of silence since 2003’s We’ve Come For You All. Alone, Belladonna has a long history with Anthrax since he worked on 1985’s Spreading the Disease and left shortly after the release of 1990’s Persistence of Time. Furthermore, the latest changes in the world of Anthrax include newest member, Guitarist Jonathan Donais of Shadows Fall, who replaced Robert Caggiano back in 2013, currently of Denmark’s Volbeat.

With such an impressive history, Anthrax is part of what is called the Big Four, which is considered to be the largest and most influential bands of Thrash Metal that also includes Megadeth, Slayer, and, Metallica. It was during the Big Four tour back in 2011, where they played across the globe including their home at the heart of the Yankee Stadium, when the band found their inspiration to continue writing new music, thus the release of Worship Music later that year. Since then, they have been extremely active touring the world, and in 2014, released the excellent DVD/Blu-ray Chile On Hell; a 119 minutes the film featuring a variety of multi-angle live clips of the band’s broad collection of tunes.

Hinting about new material in recent years, in November of 2015, they officially named the album For All Kings, along with the set release date for February 26, 2016 via Megaforce Records in North America and Nuclear Blast internationally. For All Kings marks the eleventh studio release for Anthrax, and the first to feature Donais, where many have questioned Anthrax’s musical future prior. Produced by Jay Ruston, who has worked with them previously on Worship Music, For All Kings could be one of the most anticipated Metal albums of 2016.

The meaning behind the album is not meant for being a powerful King or person in the workplace, according to Ian, there is a deeper and metaphorical sense as he described it being about taking responsibility for one’s own actions. Despite the album not having a singular theme or concept, it does demonstrate human growth where people should take control of their own life. The collaboration process began with Benante nearly five years ago, and each member has had a vital role to this well-produced album.

For All Kings marches in as a drum roll hits with the introduction of “You Gotta Believe.” As it takes off with dramatic strings, a Game of Thrones or Medieval royal setting is built. There are a few hidden chants in the background that build anticipation for what is next to come, a similar emotion to their live performances as Anthrax is considered to be one of the best live acts. The introduction concludes with a lighter guitar riff, as it morphs into “You Gotta Believe.” Launching in with a fast and heavy sound, the guitar riff powerfully progresses until Belladonna’s vocals blast in. The theme of this song is similar to the meaning behind For All Kings, where it is about accepting the realities of life, including death, as it instrumentally displays such truths with blistering chaos.

Moving in with a slower riff, “Monster At The End” captivates with a unique and different rhythm as Belladonna exemplifies lyrics about personal reflections right from the beginning with, “Do you think that you’re worth anything?” The piece is engaging from the start as it moves into a few guitar solos that are intertwined brilliantly with the bass. The pacing mixes well between its slower introductory rhythm and subtle heavy escalations. Moving into another diversified song, the titled track, “For All Kings,” shines with a long dramatic guitar riff as Belladonna’s vocals drive in. This slow and vibrant beginning does not last long as it angrily picks up and does not lose any bit of momentum.

Leading another style, “Breathing Lightning” gives off an acoustic introduction. The build up lasts for nearly one minute where the listener would not know if the track would remain soothingly slow or move into a fortified direction. Proving to be unpredictable, the track explodes with a classic Anthrax sound. This piece alone has about five different styles where the chorus rings a catchier Pop essence as Belladonna sings, “Until the right thing comes undone.” The aggression remains, along with a hint of their Punk-Rock influential roots, as the meaning of this piece could be interpreted as being given a second chance at life, but one must hurry up since it moves fast as lightning. Light-hearted and uplifting does not last too long as “Suzerain” crashes in with a smashing riff and double bass lines. It shreds into a darker realm until Belladonna’s voice powerfully joins in. It is as though he is belting out and releasing an imminent amount of frustration on “love and pain” and wanting to eventually be “free from this memory.” The instrumentation in this song remains remarkable where it holds a short distinct guitar solo that is mixed with a relentless rhythm.

Maintaining a speedy force, “Evil Twin” continues to release with merciless energy. Ian described this particular song as being “the ‘Evil Twin’ of humanity” where people have become the “executioner over their fellow man.” Musically, it is viciously executed and consistently remains brutal until the abrupt finish. Having time to catch a breath during “Blood Eagle Wings” does not last long, for shortly after its electronic opening, it grows into a heavier and distorted sound. A handful of instrumental elements lead towards Belladonna’s haunting vocals where he expresses, “Hell is empty, ‘cause all my demons are here.” The meaning displays one fighting away from the unavoidable darkness that life can bring, which can lead to psychological madness. Moving in with “Defend Avenge,” it holds a long-lasting dramatic introduction. The pace builds into a fist-pumping Thrash track that could be a great live piece, especially during the part where Belladonna repeatedly shouts out the title, “Defend Avenge! Defend Avenge!” Not only are the vocals strong, the bass takes the lead of the musical shifts and there is a flawless guitar solo that adds to this chaotic tune.

The bass rumbles in the next, “All of Them Thieves,” and moves well as Belladonna shouts, “Why, I will destroy everything.” It screams out revenge and anger with the use of speedy repetition that moves towards a terrifying instrumental breakdown. Continuing with an abrasive and traditional sound during “This Battle Chose Us,” the bass brilliantly trembles in. The chorus is catchy and the listener could easily sing along, remaining enjoyable from beginning to end. The album concludes with “Zero Tolerance” as the themes of humanity, life, death, and facing harsh realities continues. This brings out a traditional Anthrax sound showing, despite their ongoing stylistic changes, their roots still exist. It is brutal, fun, and it is a great way to let anyone release their personal aggression and frustrations.

For All Kings is a near flawless album where even the guitar solos do not appear as a filler to any of the tracks. They fit perfectly well and add to the mood by its dramatic escalations. There is an imminent amount of diversity that many listeners would embrace as they have invented new ways yet remaining faithful to their Thrash Metal roots. This is one album that does not disappoint. The quality has not dipped; it only expanded as Anthrax are not afraid of being upfront about being true to themselves. Each track comes from the heart, despite lacking a theme where there are many underlying subtexts to it that have proven not only are they phenomenal live, but they still create music that is of the highest quality. In addition, Belladonna’s vocal performance could be one the strongest of his entire career. With all that said, For All Kings will not disappoint any headbangers, who will bound to be asking for more after just the first listen. CrypticRock gives For All Kings a 5 out of 5 stars. 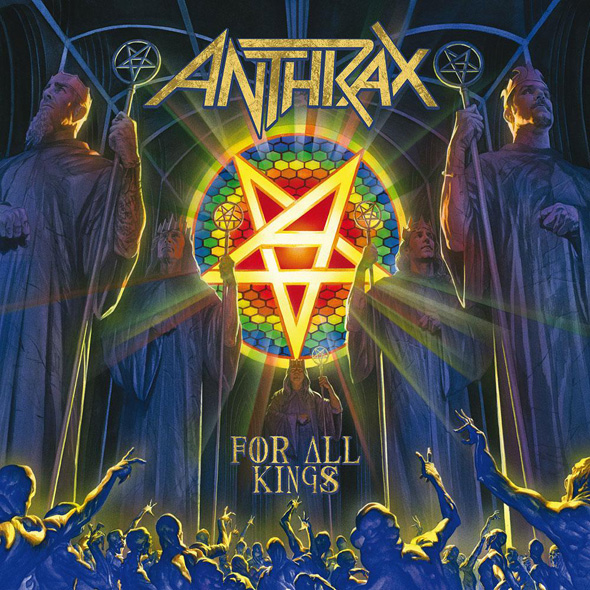