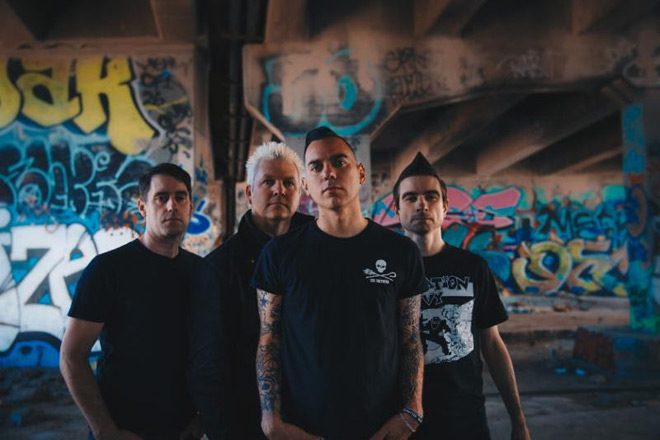 First there was American Spring, now get ready to take the plunge into Anti-Flag’s American Fall, which arrives on Friday, November 3, 2017 thanks to the good folks at Spinefarm Records and MDDN. Politically-charged to the extreme, please remember, folks, that dissent is the highest form of patriotism (or so says Howard Zinn)!

Punker Rockers Anti-Flag hail from Pittsburgh, Pennsylvania where they got their start many moons ago in 1988. A time lapse and some lineup changes later, finally, in 1996, the band released their full-length studio debut, Die for the Government. Over the next nineteen years, more line-up configurations and ten albums would follow, ranging from 1998’s Their System Doesn’t Work For You to 2015’s American Spring. What is especially known and, for some, highly beloved about Anti-Flag are their sociopolitical lyrics and activism; advocacy of progressive political action groups such as Greenpeace and Amnesty International; as well as being avowed supporters of animal rights and groups such as PETA.

A band that are known for their keen commentary and devoted activism, it seems only right that with Agent Orange now in Washington, Anti-Flag – Vocalist/Guitarist Justin Sane, Vocalist/Bassist Chris #2, Guitarist Chris Head, and Drummer Pat Thetic – are back to put their Punk spin on all the hot-button issues. Co-produced by the band and Good Charlotte’s superbly-talented Benji Madden, their eleven-song American Fall does exactly that, discussing topics ranging from racism and apathy to our digital age.

American Fall blasts off with its first single/video “American Attraction,” where the band perform in-front of an upside-down flag. This infectious rocker discusses the beauty and the beast behind our nation, especially the rabid, truly American obsession with violence, disaster, and downfall; America’s taken on the German Schadenfreude, if you will. If you fear the sociopolitical ramifications here, well, “American Attraction” is superbly catchy. Just dance!

Anti-Flag conjure up some early AFI-style Punk on “The Criminals,” a catchy discussion of a “nation hijacked by criminals” where everything is for-sale and nothing is ever free. Second single/video “When The Wall Falls” presents a lyrical play on a famous quote from publicly outspoken Anti-Nazi, Theologian Martin Niemöller. A commentary on the dangers of apathy, the song is a Ska-infused dancer that sounds deliciously fun and yet is, in actuality, a serious word of deep caution. To balance out the somber message of its predecessor, “Trouble Follows Me” is a great Punk track that has only the very slightest political leanings.

“Finish What We Started” is similar, in that the sound here is a punktastic party anthem of the political persuasion though not overbearing in its message. Meanwhile, killer bass-lines launch the attack of “Liar,” a fast-paced crucifixion of those in positions of power who tell tall-tales that make them completely distrustful. While we are being critical, let us pause to consider: are we slaves to our digital connections? Darkly aggressive “Digital Blackout” lambastes the internet age and our obsession with technological advances – the whitewashing of our minds – as “the new disorder.” Another illness of our society, big-business (“Where you gonna go when they close the superstores?”) tangos to the forefront of the Punk Rock sing-along “I Came. I Saw. I Believed.,” which mentions the Occupy movement of which the band are avowed supporters.

Anti-Flag might be pointing some cruelly serious fingers with the damned infectiousness of “Racists,” after all, He Who Shall Not Be Named loves taco salad. Plus, those White Supremacists are ‘really nice’ guys, right? (Please note the eye-rolling happening here.) Delicious bass-lines permeate the core of the superb “Throw It Away,” a track that displays the anger and grit of a band that are tired of seeing people’s lives tossed away like war is some child’s play; privilege and informed frustration butt heads here, creating a sonic stand-out on an already impressive collection. The perfect ending to a politically-charged sonic rampage, “Casualty” is Anti-Flag’s manifesto that they will not be shut down or be removed from their cause by the powers that be – be they in political office, crooks and killers, terrorist thugs, or those abusing positions of so-called authority.

American Fall sounds like an upbeat Punk Rock party, but look deeper and you will see bombs and guns, rampant racism and a country on the precipice of its own demise. The sound here is fully infectious, explosively upbeat, a direct dichotomy to the informed political underpinnings that speak of war, famine, apathy, and bloodlust. As titans of the Punk Rock scene, Anti-Flag are a well-known and highly-beloved commodity that never shirk away from voicing their beliefs, popular or otherwise. American Fall is no different from what we expect from these men, and is, in fact, one of their catchiest offerings in years. Fully invested in the fight, CrypticRock give Anti-Flag’s American Fall 5 of 5 stars. 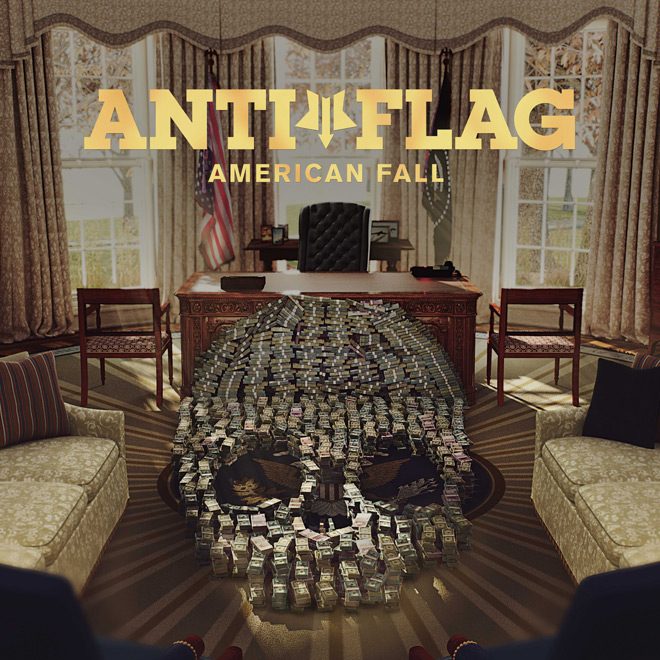