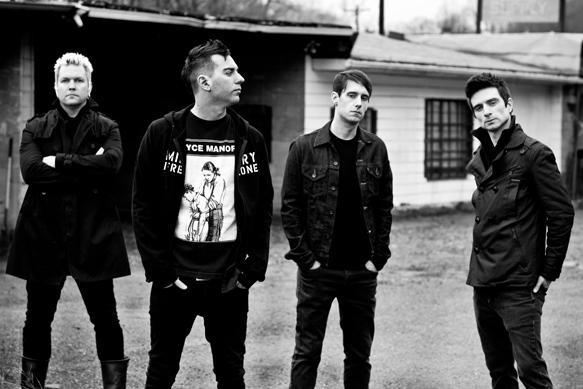 Pittsburgh, PA’s Anti-Flag believe that Rock-N-Roll does not have to be shallow escapism, that strong messages can and should be conveyed through entertainment, thrusting them to the forefront, so people had to take notice. Formed in 1988 by singer/guitarist Justin Sane and drummer Pat Thetic, who came from the aforementioned city of Pittsburgh, the site of the Homestead Steel Strike in 1892 and one of the most serious labor disputes in history. Early in the band’s inception, various guitarists and bassists came and left, including Justin’s sister, Lucy Fester formerly of Chicago band Toothpaste, causing the band to break up after one show.  Then, 1992 rolled around, and Justin and Pat gave the band another go with Andy Flag on bass.  They dropped a seventeen song demo titled 17 Songs that year, and 1996 saw the release of Anti-Flag’s first album, Die for the Government, but Andy Flag left, so guitarist Chris Head of 57 Defective met the band and joined in early 1997 on bass; however, in late 1997, Jamie Cock took over as the new bassist, sliding Head into his preferred spot of second guitar.

After the release of the compilation Their System Doesn’t Work for You in 1998, their official second length album, A New Kind of Army, followed the year after, addressing topics such as abortion, political corruption, racism, fascism, troubled youth, police brutality, and unity within the American youth. Featuring a cover art page that unfolded into a poster with the phrase “Too smart to fight. Too smart to kill. Join now. A new kind of Army,” the band also had a disclaimer at the bottom of its album cover saying, “Anti-Flag does not mean Anti-American. Anti-Flag means Anti-War. Anti-Flag means Unity.”  Settling in with Chris Barker, affectionately known as Chris No. 2, replaced Jamie Cock on bass, and the lineup of Anti-Flag has been consistent for over fifteen years as the band has blazed their own history. Nine albums later, Anti-Flag releases American Spring, their tenth studio album, co-produced by AWOLNATION’s Kenny Carkeet, Jim Kaufman, and the band, via new label, Spinefarm Records.

American Spring gets things going with “Fabled World” having the listener look under the sugar coating of our safe miniscule worlds, past the ends of our noses to see the big picture, that they are not safe due to militarism, materialism, racism, and a corrupt administration as the dual vocals of Sane and bassist/vocalist Chris #2 emphatically proclaim, “We live in a fabled world/Where the poor and the weak/Are pawns for profit’s sake.”  Then “The Great Divide” features angry riffs and heavy drums telling a story of the bleakness of being born into a class, that judgements are handed down no matter whether there is merit or not.  “Brandenburg Gate” has a Twisted Sister “We’re Not Gonna Take It” styled intro with Punk icon Tim Armstrong (Operation Ivy, Rancid, The Transplants) as a guest, helping envision the track as a kin to Billy Bragg’s “Socialism of the Heart” meets The Clash in this love song to Socialism as the guys sing, “Somewhere in the in between/Where the east and the west meet/in the 30 year war where I came clean/That’s where you will find me.”  True to Chris #2’s vision, the track marries Bragg and The Clash musically and lyrically cadence-wise.  “Sky is Falling” is a simpler piece musically with Chris #2’s dark bass intro followed by Sane and Head’s double guitar riffs flowing into one of the darkest of Anti-Flag’s repertoire, about drone strikes, and the destruction they cause physically, mentally, and emotionally.

The lyrics “Walk away/it’s what you always do/Be the same/As they want you to/There must be more to life than this” echo from the cut “Walk Away” as Sane’s and Chris #2’s rally cries demand attention to stand.  “Song for Your Enemy,” by track name seems like the quintessential slam dance fare, but look deeper…Anti-Flag call out the Bush and Obama administrations on their shady goings-on, and how they sold the public on said goings-on in the detention camps we hold our enemies.  “Set Yourself on Fire” would have the listener thinking of protesting self-immolation, but again, listen.  The guys deftly beg for people to say what is in their heart. This if followed by “Break Something,” a funky track that confronts the false doctrine of perpetual war, squashing the idea that a military “victory” can be had over concepts like “terror…” the war is never over for the survivors. The track also features a blistering solo from Tom Morello of Rage Against the Machine.

“The war worth raging is right here,” hits the nail on the head in the song “Believer” as the band shares a strong point of view when it comes to compromise, to surrender, to giving up on the promise of a better world.  Coming across with a Red Hot Chili Pepprs-like Funk intro, the song proceeds into an upbeat Punk/Pop piece. “To Hell with Boredom” follows on the previous track’s heels as the quintessential Punk track in that it is a fun, short, sweet melodious cacophony of riffs and beats, but with thought.  The piece “Low Expectations” resonates the feelings of many.  The problem is one cannot get in the habit of feeling so negatively about everything, which Sane rails on “Livin’ a life of low expectation/Livin’ a life of no salvation/Livin’ a life of low expectation/Livin’ a lie…” Ending the record, ” The Debate is Over (if you want it)” has an intro akin to Disturbed’s “Down with the Sickness” in a piece that takes on the powers that be, who say they have the planet’s best interests, and thereby ours, at heart, or simply passing the buck.

American Spring is musically infectious throughout; however, really listening multiple times to what Anti-Flag has to say makes this album a well-rounded piece of art with heartfelt inspired zingers to the status quo and the powers.  As Sane says, “Change happens one person at a time. It takes time. But it’s important for those ideas to be out there. It’s impossible to connect with every single person. When you’re putting an idea out there, you’re just hoping it will resonate with enough people that it has some kind of ability to affect their lives. But change does happen in incremental steps. The first part of being involved is being aware. Then beyond that, there are steps we can all take to become a more active part of progressive resistance.”  With that said, CrypticRock gives American Spring 5 of 5 stars. 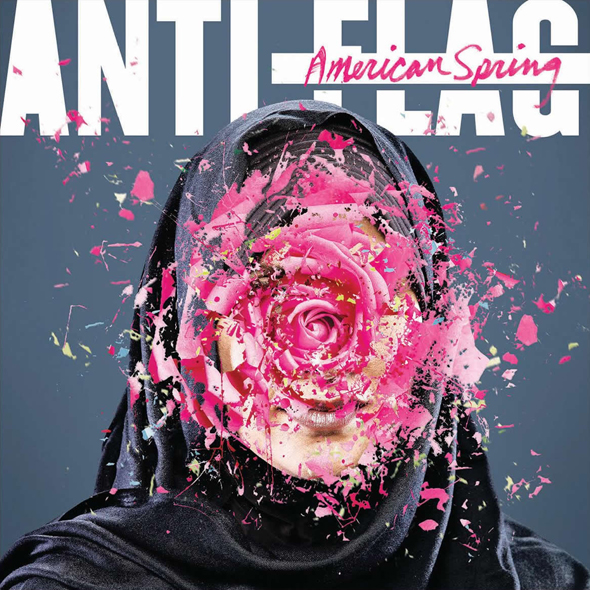