When talking about ’70s and ’80s Punk music, what enthusiasts of the genre usually cite as classic and iconic are bands such as The Ramones, The Sex Pistols, The Clash, and Dead Kennedys. This is expected and understandable; after all, these were among Punk’s heavyweight pioneers. However, recognition should go also to the genre’s subsequent purveyors that further stretched the boundaries of the initially simplistic and nihilistic Punk Rock music—adding playfulness, humor, and positivity to the often angst-ridden and hate-riddled genre.

These so-called game changers included Descendents (“I Don’t Want to Grow Up”), Toy Dolls (“Spiders in the Dressing Room”), Violent Femmes (“Blister in the Sun”), Dead Milkmen (“Where the Tarantula Lives”), and Anti-Nowhere League (“Ballad of J.J. Decay”), all of whom added a spice of brattiness onto the genre. Among the lot, Anti-Nowhere League may be regarded as the big brother, for its imposing, yet bullyish brand of Hardcore Punk that seems to combine the confrontational trait of Rotten and the rest of the Pistols, the caricaturish tendencies of The Ramones, and the snottiness of Descendents and Dead Milkmen to great effect.

Formed in 1980, in Royal Tunbridge Wells, Kent, England, by Nick Culmer (vocals), Chris Exall (guitar), Persian John (drums), and Clive Blake (bass), Anti-Nowhere League released its debut on May 7th of 1982 through their own label, WXYZ Records. Thirty-five years old this year, the songs remain as potent and engaging as they were the first time they ripped through the sound systems of the unsuspecting parents of countless Punk Rockers of old.

Titled We Are…The League…, Anti-Nowhere League’s first offering blasted with the straightforward, grating attack of the title track, lyrically introducing the band to the entire legion of Punk Rockers, who certainly welcomed the then new English band to the fold. Vocalist Culmer’s growls carried onto the ensuing “Animal,” which retained the angry mood and animalistic approach of the first track. Followed next was a song that must have become the soundtrack of hundreds of  Punk divorcés—the awesome anti-ballad “Woman.” Starting slowly and romantically with so much love, promise, and adoration, it gradually speed up and then end in a mess with so much hate, loathing, and vileness—just so perfect, in Punk terms!

“Can’t Stand Rock ’N’ Roll” was Anti-Nowhere League’s antithesis to the ever-burgeoning mainstream Rock music; and to add insult to injury, followed this up with the moshpit stompers—the contemptuous “We Will Not Remember You” and the wacky “Snowman.” Then there was the fan favorite, the very melodic “Streets of London,” which was actually a rather brilliant cover of the 1969-released, originally Folk-styled, acoustic guitar–oriented protest song of the same title by the English Singer-Songwriter Ralph McTell. It fit well onto a playlist of Punk cover songs that included The Clash’s “I Fought the Law” (Sonny Curtis/The Crickets), The Sex Pistols’ “My Way” (Paul Anka/Frank Sinatra), Dead Kennedys’ “Viva Las Vegas” (Doc Pomus and Mort Shuman/Elvis Presley), Toy Dolls’ “Nellie the Elephant” (Ralph Butler and Peter Hart/Mandy Miller), and Descendents’ “Wendy” (The Beach Boys).

Glazed with hints of Reggae, the paranoid sentiments of the self-loathing “I Hate People” then came bursting next with its punchy beats and heavily distorted, power-chord guitar strums. Building on the melody of the traditional Christmas song, “The Little Drummer Boy,” the ensuing “Reck-a-Nowhere” was another breath of fresh Reggae air, further exhibiting Anti-Nowhere League’s flare for melody behind all the noise and seeming cacophony. The sonic explosion reached its peak as the album treated its listener to the choppy and subtly pulsating rhythm of “World War III.” Anyone who had played this alongside The Exploited’s “Sex & Violence,” Minor Threat’s “Guilty of Being White,” and Agnostic Front’s “United and Strong” had known long ago that Punk’s really not dead!

The penultimate track, “Nowhere Man,” was a continuation of the electrically charged tempo of the preceding track; but this time, with faint footsteps of Psychobilly. Finally, Anti-Nowhere League wrapped up its first album with the celebratory chant of the anti-establishment anthem “Let’s Break the Law.” Anti-Nowhere League must have won, considering the influence that We Are…The League had left on the impressionable minds of progressive Punk Rockers who came after them.

Thirty-five years on, We Are…The League remains to be the highlight and crowning mohawk of Anti-Nowhere League’s music. So much evolution Punk music did undergo, but the straightforward and right-in-your-face style of albums like We Are…The League will always be the recognized foundation of confrontational types of music such as Punk Rock—obnoxious and bratty, yet catchy and fun. Yes, the English band is, indeed, a part of the Punk Rock league and revolution! What about you? Are you? 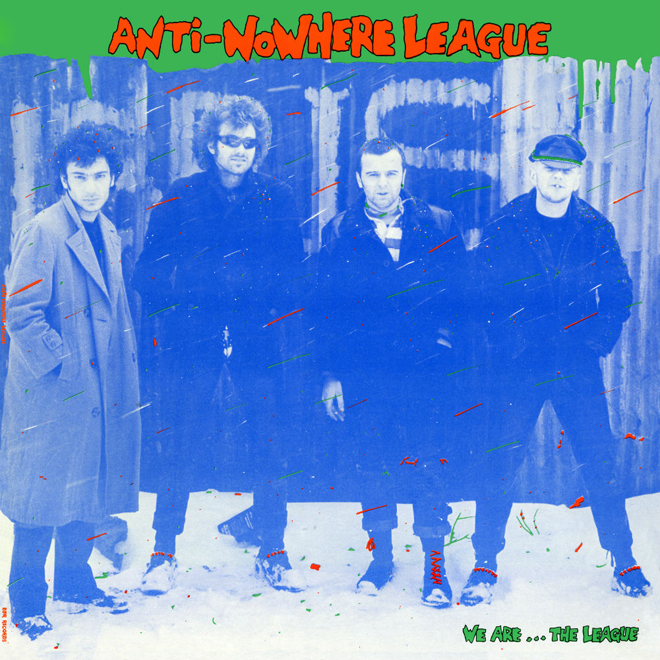