Anvil is one of those bands whose commercial success and lovability arrived late in its career, although the validation of its brand of Metal eventually came bigtime. In 2008, a documentary film about the band, entitled Anvil! The Story of Anvil, received critical acclaim from many major publications, resulting in renewed recognition of the band. In the film, a great number of high-profile Metal artists whom included Lemmy of Motörhead, Lars Ulrich of Metallica, Slash of Guns n’ Roses, Tom Araya of Slayer, and Scott Ian of Anthrax fondly expressed their acknowledgment of Anvil’s influence on the music of their respective bands. This helped put Anvil in the center of the Metal map, further elevating the band onto the pantheon of pioneers. It also gained for the Canadian band new fans, expanding and reinvigorating their fan base. Most of all, the band’s newfound popularity catapulted Anvil’s prolific body of work into the forefront.

As shown in the film, founding members Steve Kudlow (vocals, guitar) and Robb Reiner (drums) had gone through a lot of ups and downs, played countless successful and shitty gigs locally and internationally, and has persistently and consistently been releasing original materials since its inception until big break and lady luck finally heard the duo’s relentless hammering and pounding on their proverbial anvil.

Formed in 1978, in Toronto, Ontario, Anvil is inarguably a prolific and hardworking band, releasing an average of one album every two years – from 1981’s Hard ‘n’ Heavy to the newly released Anvil Is Anvil. Its brand of Heavy Metal is best characterized by Kudlow’s Thrash vocal styling, power-chord rhythms, and argentic guitar ad-libs; Reiner’s relentless, heavy-hitting, and bass drum-oriented pounding; and the overall hot-breathed and well-oiled motor tempo of most of their songs. Anvil’s music is certainly in league with those of Metal heavyweights such as Motörbreath, Judas Priest, and Diamond Head.

Anvil’s sixteenth studio album, Anvil Is Anvil, was released on February 26, 2016, on Steamhammer Records. It is the band’s first album to feature its new bass player, Chris Robertson. Traditionally following the thunderous Heavy Metal style of its predecessors, it begins with the Power Metal surge and chant of “Daggers and Rum.” The mood immediately shifts to fourth gear with the ensuing “Up, Down, Sideways,” whose speed and spit bears kinship with Motörbreath’s equally relentless “Ace of Spades.” Lyrically, the next track, “Gun Control,” proves Anvil’s being in touch with current world issues. And then there is the pound-for-pound drive and metal-on-metal crash of “Die for a Lie.”

“Runaway Train” is a very onomatopoeic piece; with its hard and heavy rhythm, Thrash tempo, and speed-of-sound guitar ad-lib, it blasts out of the speakers like a derailing train. The vibe then becomes sinister with the choppy and bluesy “Zombie Apocalypse,” shooting shards of Mustaine-era Metallica. “It’s Your Move” returns the album to its turbo-charged theme; this time going for the jugular as it recalls the steel intensity of Judas Priest’s “Rapid Fire.”

“Ambushed” and “Fire on the Highway” may be regarded as the album’s carriers, as they best highlight Kudlow’s trademark rasps and licks and Reiner’s double kicks. “Run Like Hell,” on the other hand, has a touch of the rhythmic urgency and buzz-saw sharpness of Hardcore Punk, screaming the sonic aggressiveness of the likes of Angelic Upstarts (“Small Town, Small Mind”), Black Flag (“Rise Above”), Circle Jerks (“Wild in the Streets”), and Minor Threat (“Guilty of Being White”). Finally, Anvil Is Anvil aptly closes with the relatively slow-tempo “Forgive, Don’t Forget,” which features a slashing guitar line that may remind the initiated of Guns n’ Roses (“Nightrain”) and back-up chants that resonate Blind Guardian (“Traveler in Time”).

With how they have been continually moving forward and unleashing new music regularly, while many of their batchmates had long retired, Anvil’s tunesmiths are seemingly just beginning work. Their craftsmanship with their tools of trade remains on high gear, as displayed by the well-crafted metallic sheen of their latest release. CrypticRock gives Anvil Is Anvil 4 out of 5 stars. 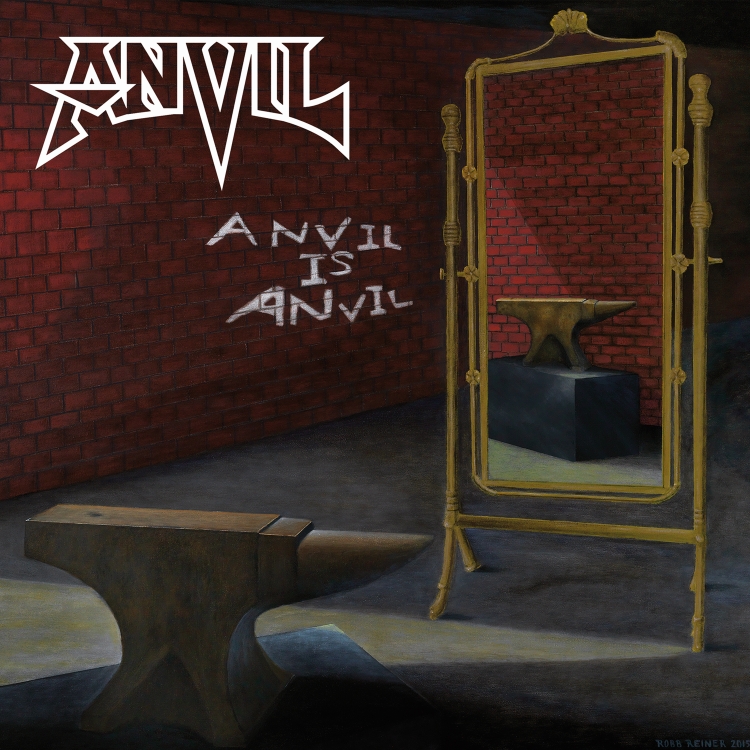