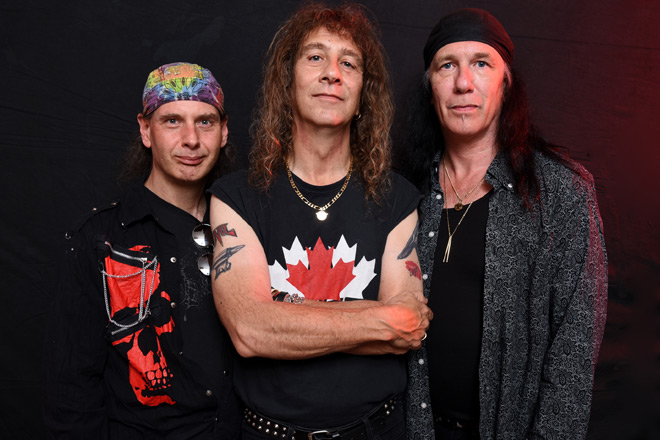 Clang! Clang! Clang! go Anvil, again pounding their way into the realms of the Metal world. The hardworking, prolific, and pioneering metal-smiths from Toronto, Ontario, Canada, did not really waste their time, nor let the momentum falter, after having been given a new lease on life when their heartwarming and heartrending 2008 documentary, Anvil! The Story of Anvil, put their name back on the Metal music map and gained for them new legions of fans and followers.

Still fresh from their last year’s offering, Anvil—Steve Kudlow (vocals/guitar), Robb Reiner (drums), and Chris Robertson (bass)—are unleashing yet another solid set of power-charged songs. Slated for release on January 19, 2018, on SPV/Steamhammer, the power trio’s seventeenth studio album, Pounding the Pavement, claws its way out of the loudspeakers with the thunderous Heavy Metal grind of its opener, “Bitch in the Box,” whose grits and grates make it an instant classic in the league of Deep Purple’s “Highway Star” and Diamond Head’s “Am I Evil?” The vibes then turn straightaway maniacally electric with the breakneck speed of “Ego.” The ensuing “Do What I Want” harks back to the pompous, over-the-top extravagance and indulgences of ’80s Glam Metal, Van Halen style–David Lee Roth era.

Anvil turns a bit thrashy and sinister with the confrontational “Smash Your Face,” yet still maintaining their anthemic choruses and virtuosic, flashy guitar interludes. The instrumental title track is a proud display of pyrotechnicality—with traces of influence from Steve Vai’s dramatics, Paul Gilbert’s mercurial proficiency, and Slash’s snakelike fret-scaling tendencies; all these blended in equitable measures to achieve a sweet-sour gustatory consistency.

“Rock That Shit” is a trip farther back into Anvil’s roots—less metallic and more hard-rockin’; think of Led Zeppelin (“Rock and Roll”) and Cheap Trick (“Love Comes A-Tumblin’ Down”) in their respective Rock-n-Roll glory. Following next is a highlight of the album, in a thematic sense, “Nanook of the North” – Anvil’s homage to a piece of Canadian myth and history—which “tells of the struggles of the Inuk man named Nanook and his family in the Canadian Arctic.”

“Black Smoke” returns the listener to the frenetic and relentless headbanging and blast-beat moments of the album, reverberating flashes of aces and spades and reeking with live wires of motorbreaths and whiplashes. Maintaining the same Heavy Metal style, albeit shifting the gear a couple of notches slower, “World of Tomorrow” is where Kudlow’s low-register, velvety voice minus the growls soars and shines through above all else, making it a standout among the rest.

Finally, Anvil ends their latest onslaught in mayhem and cacophony with a speed freak’s nightmare of a track, “Warming Up.” What? After all the sweat-soaking shit and mind-blowing Metal bits, they are just warming up? Well, that is Anvil for you!

From 1981 to 2018, that is thirty-seven years of passion and hard work, annealed in experience; from Hard ’n’ Heavy to Pounding the Pavement, that is a seventeen-album discography. Through the eardrum to the hammer, to the anvil, to the stirrup, to your senses…Yes, that is the persistent and undaunted Anvil, still thrashing their time-wrought metal-craft into your audio system after all these years. CrypticRock gives Pounding the Pavement 4 out of 5 stars. 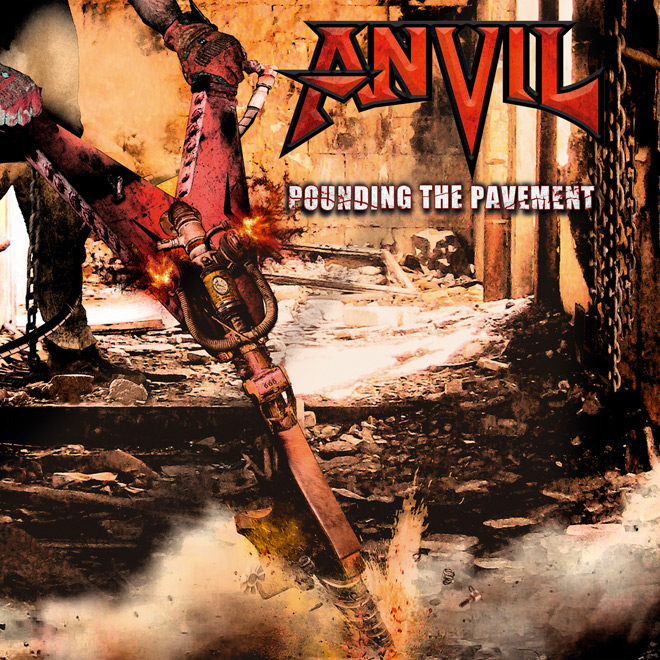 Blaze Bayley – War Within Me (Album Review) Korpiklaani – Jylhä (Album Review)
Like the in-depth, diverse coverage of Cryptic Rock? Help us in support to keep the magazine going strong for years to come with a small donation.